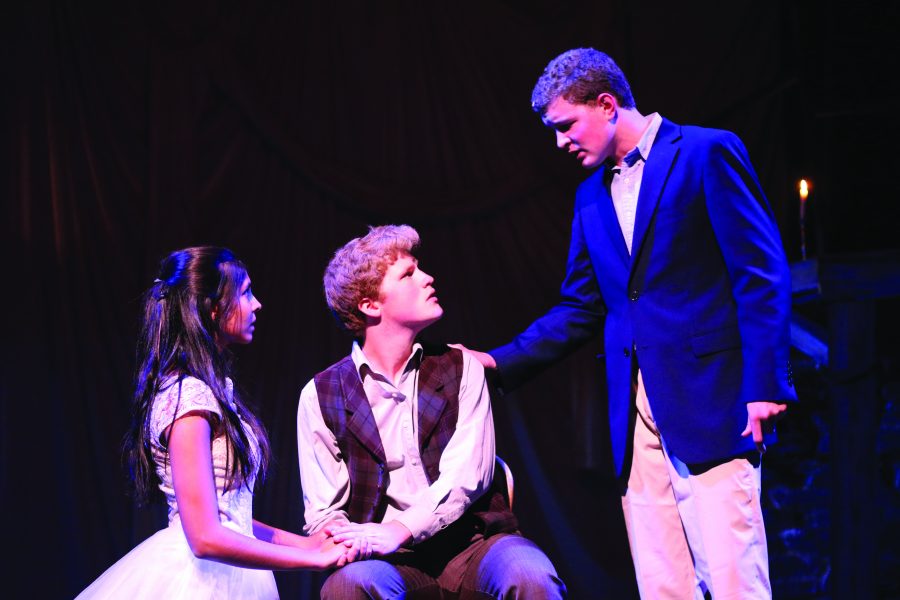 Jack Nordstrom ’19, right, as Marius and Maya Hinkin ’18, left, as Cosette comfort Henry Platt ’17, middle, as he is dying. Photo by Pavan Tauh/Chronicle

After almost two months of preparation, the Upper School Performing Arts Department showcased four performances of Les Miserables on Nov. 3, 4, 5 and 6. The cast of 44 told a story of interconnected characters in 19th century France, following the life and struggles of ex-convict Jean Valjean, played by Henry Platt ’17.

“Kids who are not used to being in shows, when they have an audience in front of them and they realize they’re playing a story and they have to be great storytellers, something magical happens,” performing arts teacher Ted Walch said.

Walch and performing arts teacher Michele Spears co-directed the production. Walch said Spears, who specializes in musical theatre, was the lead director. Walch focused on aiding the students in their acting during the rehearsal process.

Orchestra began rehearsals for the show at the beginning of October. Early rehearsals were typically three days a week for three hours, though leading up to performances, they practiced daily for five hours.

The pit orchestra includes both students and professional musicians.

“Playing with professionals, I think I got better as a musician because they know a lot on the topic, so there’s a lot of firsthand experience as to how to play,” Calvin Kaleel ’18 said.

“Usually I will do more work on the scenes that are spoken, but in Les Miserables, there are no spoken scenes, so [Spears and I], unlike most rehearsals for musicals, were in the room together almost all the time,” Walch said.

Cast members also said they noticed changes in the rehearsal process, attributed to the absence of spoken scenes in the show.

“Until a few weeks ago, our rehearsals were exclusively singing,” Maya Hinkin ’18 said. “It definitely felt very different from other shows I’ve been in.”

In Les Miserables, Hinkin played Cosette, a teenage girl taken in by protagonist Jean Valjean, after her mother Fantine, played by Natalie Kroh ’18, died of an illness. Cosette falls in love with student and young revolutionary Marius, played by Jack Nordstrom ’19.

The actors said that despite the historical setting and plot of Les Miserables, they felt a connection to the characters they were playing.

“I think that Cosette is very often portrayed as not having real problems because she is a 16-year-old who finds love at first sight,” Hinkin said. “But, I think she actually has a lot more going on than what meets the eye and you really see her start to come out of her shell and grow up, which is definitely very relatable to my life.”

Elizabeth Gaba ’17, who has participated in musical theatre throughout her time at the school, said that relating to her character has made this production especially rewarding. Gaba plays Eponine, who has an unrequited love for Marius and is the daughter of petty thieves Madame Thenardier, played by Natalie Musicant ’17, and Monsieur Thenardier, played by Casey Giolito ’17.

“I am in love with this role and it’s my favorite role I’ve ever played,” Gaba said. “I connect to her very strongly and I love her a lot.”

Unsure if she will continue performing during college, Gaba said she reminisces on the impact musical theatre has had on her life during her time at Harvard-Westlake.

“It’s very bittersweet,” Gaba said. “This could very well be my last show ever, which is very sad since it’s been such a huge part of my life. I’m very happy that I got to play [Eponine] for my last show.”

Hinkin said one of the best parts about Les Miserables is the importance of the entire cast.

“This show doesn’t have an ensemble that’s just in the background,” Hinkin said. “Every single person is so relevant to every scene.”

The production was a very special bonding experience, Nordstrom said. He said the backstage environment during a show could be described as both exciting and emotional.

“You kind of see people’s looks and just get it,” Nordstrom said. “Even if someone’s super into it and you don’t talk to them, it’s like everyone knows how everyone feels. We’re all like one unit. Everyone’s in sync with each other.”