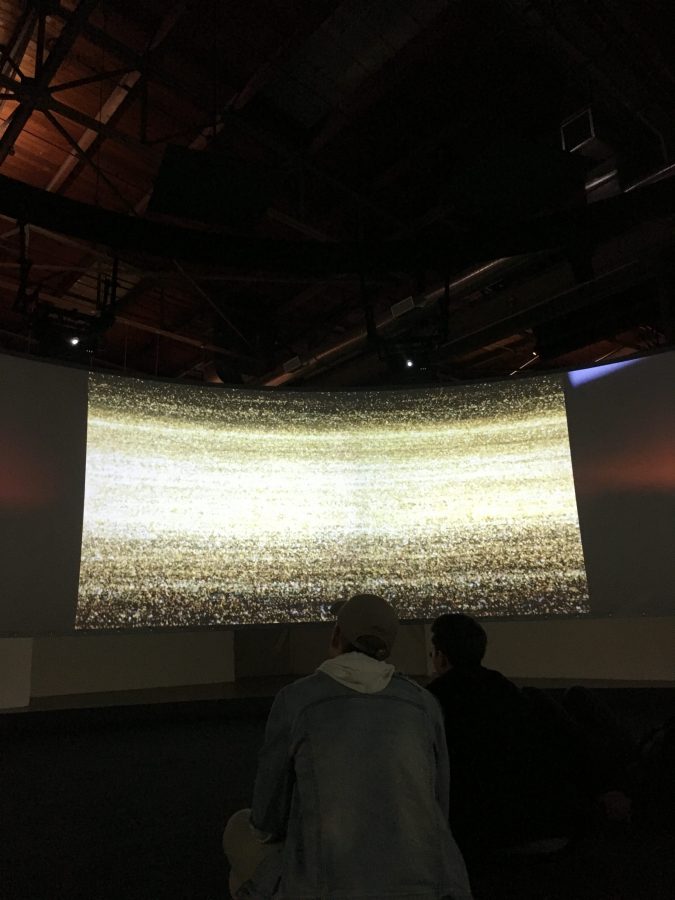 Students in the Visual Arts classes watch an exhibit at the Museum of Contemporary Art on Jan. 6. Printed with permission of India Brittenham.

Students of the Video Art I, II and III classes visited The Geffen Contemporary building at The Museum of Contemporary Art to visit artist Doug Aitken’s “Electric Earth” exhibit Jan. 6.
The exhibit showcased multiple forms of art such as video art, photography and sculpture.
The focus of the pieces was centered around nature’s relationship with industrialization and environmental and climate change.
Video art pieces included filmed landscapes and explored how houses and other man-made structures interact with the environment around them, including a house in Brazil and an underwater pavilion.
The pieces displayed forms of art that students had not previously been exposed to, Video Art I student India Brittenham ’19 said.
“The field trip was an awesome experience that, without this school, I never would’ve gone to,” Brittenham said. “My favorite thing was the black mirror room, which was a reflection of short films on the wall with multiple perspectives and dimensions.”
Students also watched a film by minimalist singer and videographer Terry Riley, who performed improvised songs on the piano to Aitken’s videos.
“It expanded my knowledge of what you could do with a camera,” Video Art II student Jakob Klein ’18 said. “You were allowed to walk around and see the video happening. It was so cool, and I was not expecting to see the artist there.”
Upper School Visual Arts Department Head Cheri Gaulke and Visual Arts Teachers Kevin O’Malley and Alyssa Sherwood chaperoned the trip to the museum.
O’Malley hoped that the field trip would show that there are many ways to use the medium of video art that is not necessarily in the form of a movie.
“Aitken’s work has given our Harvard-Westlake students something to think about the next time they pick up their camcorders,” O’Malley said. “A movie may not be the final, end-all-be-all product for a 21st century visual artist.”
Students enjoyed the trip and felt that it was a unique experience, Video Art I student Izzy Yanover ’19 said.
“I really liked the trip,” Yanover said. “I thought it was super cool to see an exhibit like that because there are so few of them.”