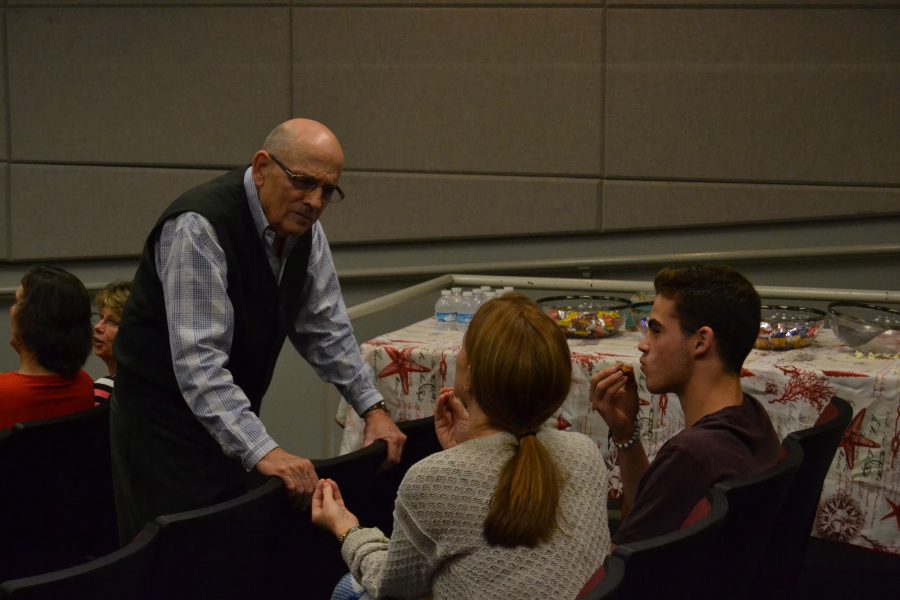 Cinema Sundays organizer Ted Walch catches up with Josh Musicant ’17 and his mother before the film. Credit: Anthony Weinraub/Chronicle

Walch, who has taught at the school since 1991, said that the first event attendees were charged to fundraise for the financial aid program. Now, however, the Kutler Center sponsors the event and admission is free. While the event was at first only open to adults, students are now encouraged to attend. Walch has also incorporated Cinema Sundays into the curriculum of his Cinema Studies class.

Walch says the format of the event– an introduction to the film, the showing, break, and then discussion– has stayed almost exactly the same over the years.

The first event of this year took place Jan. 8 featuring the film “You Can Count on Me” directed by Kenneth Lonergan. This showing was not on the original list of nine scheduled movies, but was added by Walch at the last minute. Walch said due to the success of Lonergan’s recently released film, “Manchester by the Sea,” he felt the film was both an enjoyable and relevant additon.

The other films included in this year’s lineup offer a wide variety of time periods to experience, ranging from “His Girl Friday” and “The Shop Around the Corner” that came out in 1940 to “Biutiful” in 2010. Six of the movies will feature guest speakers such as producers, actors or authors afterwards.

Walch encourages students and parents to attend the remaining events.

“The reason, most always, that we go to movies is that we want to find out something about ourselves,” Walch said. “This is a community event. Everybody’s welcome.”