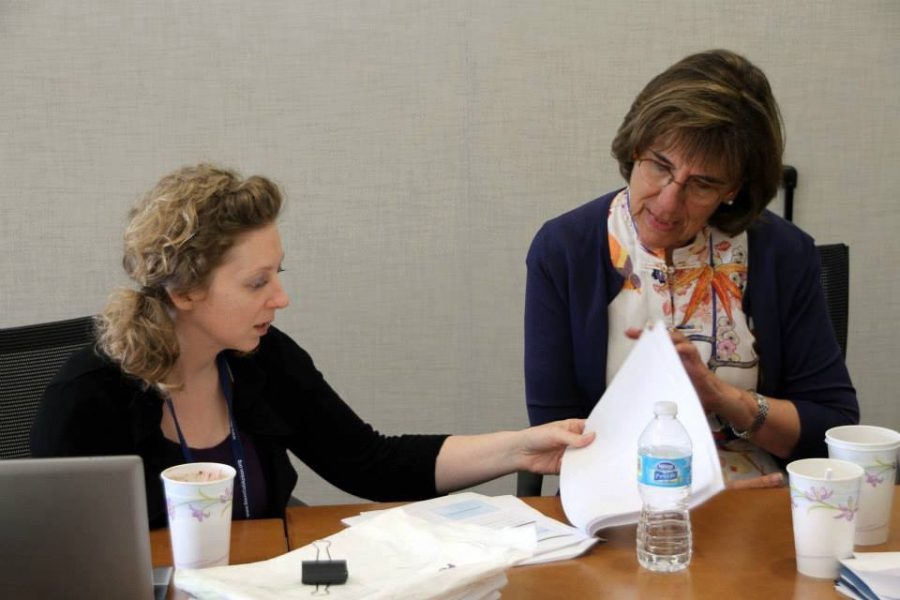 La Femme Speaker Victoria Fox discusses the importance of stem cell research and the significance of women being represented in STEM fields with Head of School Jeanne Huybrechts before the official La Femme meeting Jan. 9. Credit: Printed with permission of Daria Arzy

Stem cell researcher Dr. Victoria Fox was set to speak to members of La Femme about her experiences as a woman in science and the importance of stem cell work Jan. 9, as of press time.

Fox is the CEO of PluriCORE, which provides consultants for researchers who are hoping to incorporate stem cells in their work.

She is also the President and Executive Director of Pathways to Stem Cell Science, a non-profit organization that trains students in stem cell biology.

La Femme leader Sohni Kaur ’17 attended and learned how to grow stem cells with Fox’s guidance, which is how she found her as a speaker for La Femme.

“In the short amount of time I spent with her, I realized she was an incredible teacher and clearly a very intelligent woman,” Kaur said. “She made sure we had fun while still maintaining her ‘no-nonsense’ attitude and made sure we were still on track. I just think that everybody should know a woman who knows how to get work done the way Dr. Fox does.”

Until recently, Fox’s research was shut down, and she explained to students why stem cell work is helpful, but also controversial.

“Not everybody knows exactly what stem cell research entails and how it helps,” Kaur said. “I think that informing everybody, no matter what their gender is, of the actual scientific facts behind stem cell research will help get rid of some of the controversy.”

Kaur said that with such a lack of women in the STEM field, she hopes that the girls who attended the talk will benefit from hearing from a woman successful in a complex field.

“I think it’s very inspiring to see women having larger roles in STEM fields,” Bella Guanche ’19 said. “And, I think it’s important that younger generations see that it is possible for them to pursue their own interests.”

La Femme members have been enjoying the talks and learning about STEM, Kate von Mende ’18 said.

This is the second talk they have hosted this school year.

In October, La Femme held the first talk where Senior Vice President of Global Communications Celebrity and VIP at Marc Jacobs Celine Khavarani ’95 spoke about her experience as a woman in the work force.

“I think that [La Femme talks] are super empowering and interesting,” von Mende said. “It’s not often that you get to see powerful women in person. These talks allow you to hear straight from the source these women’s problems that are similar to your own. I also think it’s important that [Fox] is coming to Harvard-Westlake because we aren’t exposed to women in the STEM field, whether in person or in the media.”