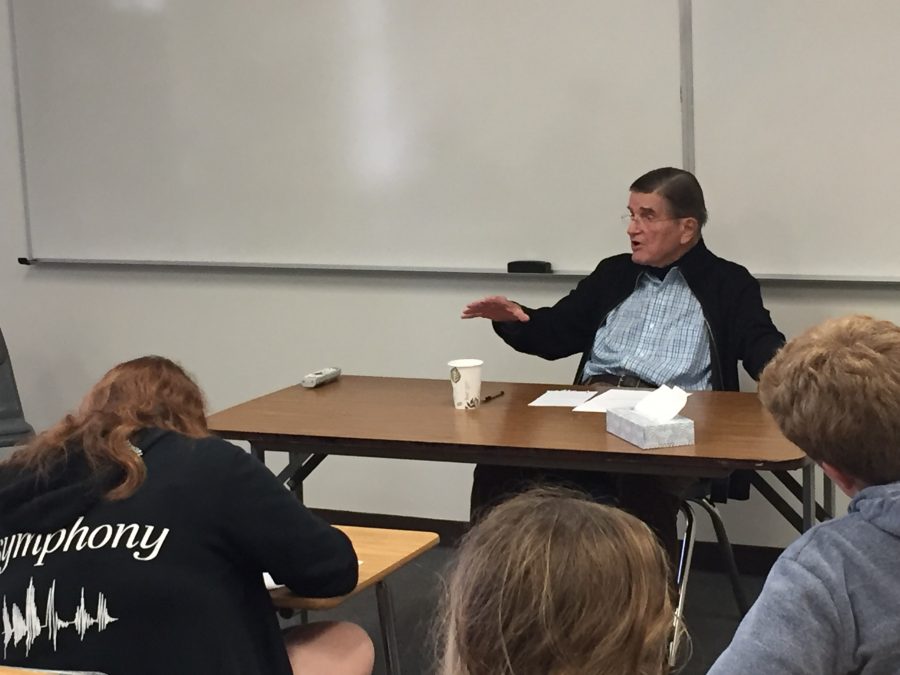 Holmes recounts his experiences negotiating with the Soviet Union and serving as Ambassador to Portugal to an AP Government class. Credit: Maddy Daum/Chronicle

“Diplomacy is in many ways the most significant instrument of national power, which uses core skills like negotiation and is essential for maintaining good relations with anybody, whether they are allies or friends,” Holmes said. “Even if you are dubious about it, it’s important to talk to people. You have to learn how to be a good listener, and have a point of view and push it, particularly in negotiation.”

Some of the responsibilities of his various government positions included promoting and protecting American interests, managing diplomatic relations with other countries and international institutions and bringing nations together to address global challenges such as terrorism.

Because of his many years of experience working in government, Holmes told stories of his dealings with the Portuguese Communist Party, an Italian terrorist group known as the Red Brigades, high ranking Japanese officials, and Former General Secretary of the Communist Party of the Soviet Union Mikhail Gorbachev, the last leader of the Soviet Union.

“I had sessions with the senior man of the Soviet armed forces and he said you all probably don’t realize how committed we are to doing serious negotiations to reduce the nuclear standoff between our two countries, and the reason is Chernobyl,” Holmes said. “It really drove them and we made a lot of progress as a result of that.”

He also spoke about the responsibility that he had as an ambassador to look out for the best interests of the United States, especially in dangerous situations.

“I thought he was really interesting and engaging, and his lecture was more focused on past events and how we can interpret history to better understand current events,” Natalie Choi ’18 said. “He was very knowledgeable and experienced, and I enjoyed his lecture knowing that he had experienced international relations firsthand and that his stories were personal made the lecture even more impressive.”