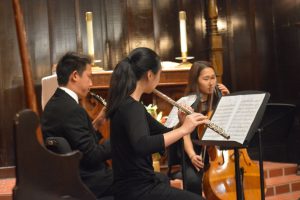 Musicians played in small groups of less than 13 Feb. 10 and 11. Students played pieces from the 17th through 20th centuries in Saint Savior’s Chapel and the Feldman-Horn art gallery. Photo Credit: Isabelle Eshraghi ’18/Chronicle

The first half of the performance took place in the chapel, and the entire performance was then moved to the gallery so that musicians could perform with the piano.

Students performed pieces from the 17th through 20th centuries, including Vincent Persichetti’s “Pastoral” and William Ryden’s “Tango 5 1/2” in small groups of 13 students or less.

Upper School Performing Arts teacher Mark Hilt said that he chose those pieces for the performance because he believes they fit well with the musicians in each of the ensembles.

“[The musicians] have been working on some of these pieces since August through September, some only started right after Thanksgiving break in December and some have just started four weeks ago,” Hilt said. “It’s not something that can be learned or practiced in class, it has to be taken on as a project that the students have the initiative for.”

Hilt only conducted one of the pieces, “Double Concerto BWV 1043” by Johann Sebastian Bach, which was performed in the chapel by a group of 13 students.

Myria Chen ’18, who plays the harp, said that there was a very unique variety of instrumental pairings in this performance that she was excited about.

“Everyone who is in this concert has been putting a lot of time and effort into making the pieces really dynamic, so the audience would enjoy listening to it and invest a lot of their passion into the music,” Chen said.

Violinist Tony Kukavica ’17 said that he enjoys performing a variety of different types of music in these types of chamber music groups.

Claire Dennis ’18, who also plays the harp, said that preparing for the concert was difficult due to a lack of time in common with the other member of her duet. However, she said that their work payed off.

“I felt very satisfied after our performance because I knew that we had played beautifully as a result of our hard work and dedication to the song,” Dennis said.

Dennis also said that the chamber concert presented a unique opportunity because it allowed her to showcase her abilities without having to play with the rest of the orchestra.

“The chamber music concert focuses on each instrument’s strengths,” Dennis said. “Everyone is heard more clearly than at a full symphony concert.”

Anna Gong ’18, who played three pieces on violin in the concert, said that rehearsing for each piece was time-consuming, she is proud of all that she accomplished through all that practice.

“The best part is when I took a bow at the end of each piece knowing I was done and feeling satisfaction because I’d actually implemented all I learned from practice,” Gong said.

Hilt said that because of the time spent on rehearsals, the show demonstrates the months-long dedication of his students.

“We use some class time for [rehearsals], but the best ensembles have really taken leadership and ownership of the ensembles,” Hilt said. “It’s very rewarding. This is an excellent group of musicians this year.”