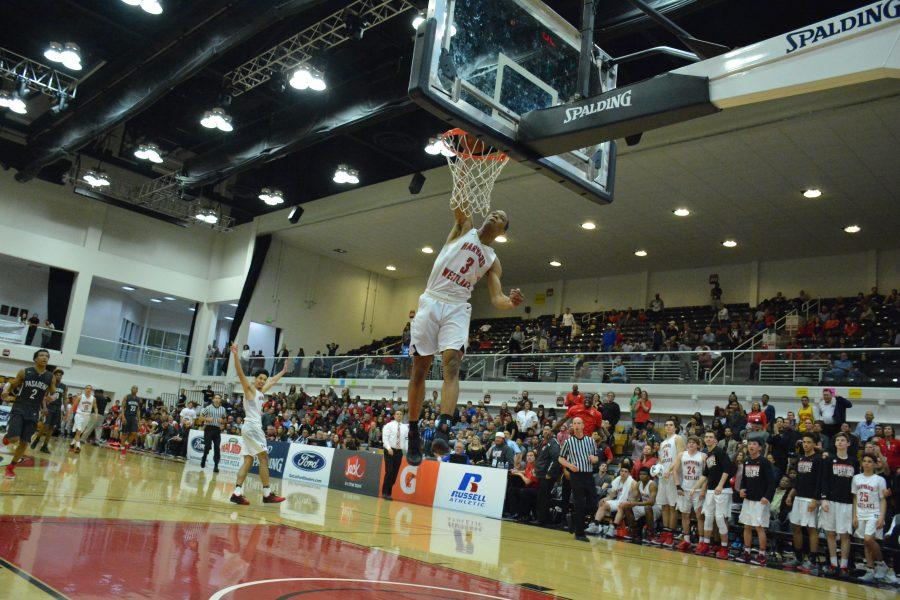 When the celebrations subsided and the ceremony was completed, the Wolverines were all smiles. All they could do for now was wait.

Harvard-Westlake would eventually defeat Pasadena 68-58 in the CIF-Southern Section Division 1A championship game, but that hadn’t happened yet. Brentwood had just defeated Burbank with a three at the buzzer to win the 3AA title. The Eagles were awarded the championship plaque, and then everyone was herded off the court so the next game could begin.

The Wolverines and the Bulldogs take the floor and start to warm up. They shoot, and shoot, and shoot, and shoot. Shootarounds normally last 10-15 minutes, not an eternity. And yet, the scoreboard clock is frozen as 7:27. Coaches are informed that the start of the game is delayed 40 minutes to allow fans waiting outside Felix Event Center to enter.

It’s past 9 p.m.–both teams have been waiting all day, all season, for this moment: a shot at winning a Southern Section title. This is supposed be a tense and nervous atmosphere. This is the part where players should start to feel the roof cave in on them, hearts racing, palms sweating. When the lights went out at the Mercedes-Benz Superdome during Super Bowl XLVII, pundits acted like it was the end of the world.

And yet, the mood is light near the Wolverines bench, as though it was their own trophy presentation that had just finished. L Simpson ’20 walks by and says something to Head Coach David Rebibo. Rebibo cracks up. Moments later, a similar exchange takes place between Rebibo and Cassius Stanley ’19. Blake Wong ’17 grins at the coach. Ray Mueller ’17 has a chuckle. It’s like the court had become an amusement park, with fun activities like walk to the Gatorade tank and shoot the ball a bunch of times. Popcorn and cotton candy would have fit right in had it not been past these unusually tall children’s bedtime.

Johnny Juzang ’20 led the Wolverines in scoring with 21 points. His eyes lit up when he was asked after the game if the team was having more fun than they did earlier this season.

“For sure,” Juzang said. “Definitely. It’s gotten a lot more fun–everybody’s moving the ball, sharing the ball, and everybody has more fun that way.”

Rebibo acknowledged that getting the team to gel was a challenge earlier in the season, but it appears those days are over.

“I think when you don’t know somebody and you’re standing next to them and working with them every single day, I think there’s an awkward deal where it’s like, ‘Hey, we gotta get to know each other a little bit’ to work together, and I think that’s what’s happened,” Rebibo said. “We had a lot of guys move in that we weren’t familiar with and a lot of guys move up that had different roles, and I think we’ve grown and we’ve learned and we’ve expanded and…they love each other now…they were one big happy family.”

Stanley expressed a similar sentiment with regards to team chemistry.

“During the summer, it was a brand new team,” Stanley said. “Even during [Mission League play] it was a brand new team because of injuries and other reasons. We just hadn’t really meshed, but these past coupled games–playoffs, end of league,–we just really bought in as a group, and I think it’s showing on the court: winning games, winning CIF.”

It was another postgame interview to suggest that the Wolverines are buying into Rebibo’s philosophy, with the coach and one of his players matching each other’s thoughts nearly verbatim in separate conversations–Rebibo remarked that “Our guys are really buying into each other, and it’s showing.”

But when did everything finally click? At what point does a group of high schoolers become brothers? Stanley believes the turning point was the team’s home win over Notre Dame on Feb. 1, which Rebibo missed due to the flu.

“We all just brought it together,” Stanley said. “We hate Notre Dame and we’re just going to come out and try to, as a team, just demolish this team, which we did, and I think that was really a turning point where we all just bought in, and ever since then I think we were pretty good.”

In the eyes of the writer, that was the first game in which the team really looked like it was having fun. It seems as though that fun has never stopped.

By the time the game finally tipped off, the Wolverine boys were men again, but their childlike fun remained. They went on a 21-4 run after trailing 5-3 early in the quarter. Harvard-Westlake led Pasadena 24-11 at the end of the opening quarter.

Harvard-Westlake out rebounding Pasadena 24-12 too.

A little over two minutes into the third quarter, Rebibo called a timeout with the Wolverines leading 45-27. Neil Iken ’18 gave his father a thumbs up from the huddle.

Neil Iken flashes his father a thumbs up and a smile from the huddle. Wolverines seem a happy bunch tonight.

Everyone in white was having a good time, but that would soon change. The Wolverines started to commit turnovers, although it wasn’t hurting them on the scoreboard initially. However, they continued to give the ball away, and the Bulldogs started making headway. The score went from 52-33 late in the third quarter to 52-43 early in the fourth. Harvard-Westlake committed six turnovers in final six minutes of the third quarter.

But the margin stabilized from then on out, with the Wolverines always keeping the Bulldogs at an arm’s length, never letting them within eight points for the remainder of the game. Rebibo believes it was his team’s unity that allowed the Wolverines to hold on.

Stanley punctuated the Wolverines’ victory with a steal and an emphatic windmill dunk as time expired.

The sophomore guard, who scored 16 points, admitted that even he was surprised by his dunk, though his thought process leading up to it was rather simple.

“[I was thinking] make it,” Stanley said. “Just make it. I missed a dunk earlier in…the game and I was like, ‘Okay, I gotta get one down,’ but I didn’t expect to throw it down with so much flare and power.”

After the game, each player received a commemorative t-shirt and patch, and Rebibo was presented with a championship plaque.

The Wolverines rejoiced, but they know that there is still more work to be done, with the CIF-State Division 2 tournament beginning shortly.

“[We have to] stay focused,” Juzang said. “We’re gonna celebrate, but eventually, we’re going to know that there’s another mission at hand and just stay determined, keep working hard.”

So once again, two hours later, when the celebrations subsided and the ceremony was completed, the Wolverines were all smiles. All they could do for now was wait.