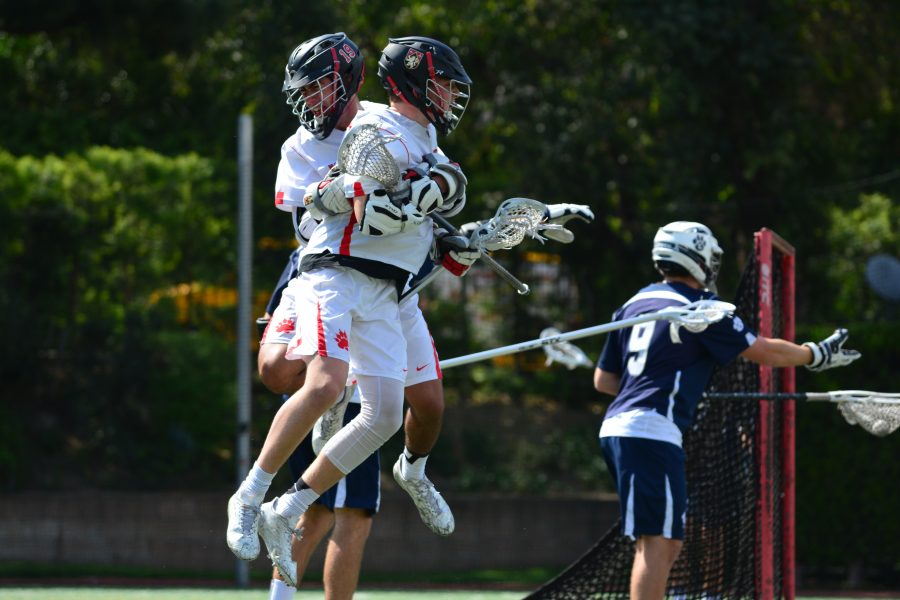 The boys’ lacrosse team edged rival Loyola 13-12 in overtime to keep its perfect record intact at 8-0.

The rivals kept the score close all day, exchanging the lead, neither team being able to edge the other by more than two points until the Wolverines managed to build a 12-9 lead with less than two minutes left in regulation. It seemed as though the Wolverines had the game in the bag, but the Cubs responded ferociously, scoring three quick goals to tie the game up. The Wolverines failed to score a goal on their final possession, and the game went into sudden death.

“We were up three goals, Loyola fights every single possession. Every single time the ball is on the ground, Loyola is always fighting,” Head Coach Erik Krum said. “They gained possession a few times, went down and they have very strong offensive threats. We weren’t respecting them and they made us pay. [When] they tied it up, I just told the boys we have to believe in ourselves, believe in each other and believe in our system and they came out and got the job done.

In the Wolverines first overtime offensive possession, Pompan sprinted down the field and flipped a pass to Rodriguez who found the bottom left of the net to seal the game. His teammates stormed the field, sticks and gloves went flying in celebration.

“When you’re playing a good team you can never just expect that the game is over,” assistant coach Riley Lasda said. “We knew they were gonna fight back. We gave them a couple of plays where we didn’t perform up to our standards but we showed composure and fought back and finished how we wanted to finish.”

The story of the day was the cross-town rivals leaving it all on the field despite both teams facing injury.

Lasda described Listen, the squad’s face-off specialist, as “touch and go,” as he has been facing a hip and hamstring injury all week. Notable absences also included Asher Early ’19 and Gideon Hyman ’20.

The team also received a scare when Harleston went down with a leg injury. Fortunately, it was just a calf cramp and he was cleared to return soon after.

Although today’s victory was impressive and a good sign for the future to come, the coaches emphasized that they would not become complacent.

“We’re focused on ourselves,” Krum said. “ We want to be one of the top teams in the state. We want to continue to work hard during practice and move forward for the rest of the season.”

“The target on our back just got a lot bigger after today’s game,” Lasda said. “This is a league where there is pretty good quality all around. If you lose focus for a second, you can get stung. We just told the guys in the locker room that they’re one of the best teams in LA. The best teams, regardless of if they have a big win, don’t get cocky, they just refocus. They dig deeper for the next match.”

The squad faces Chaminade next Tuesday.