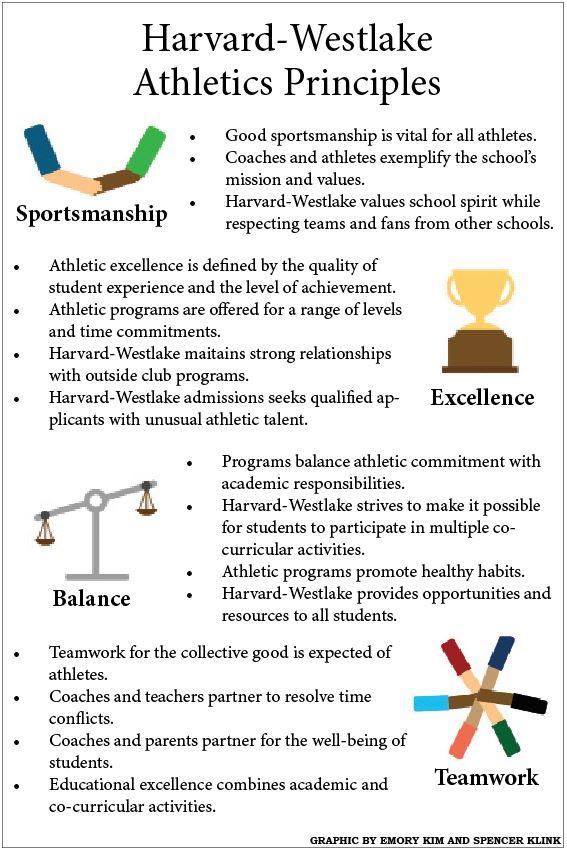 After six months of meetings, the administration will present a set of 15 athletics principles as a standard for the athletic department’s expectations and to address contemporary issues.

The Athletics Mission and Planning Committee, made up of 14 faculty and staff members, convened to answer two questions: In what ways is the HW Athletics Program aligned or misaligned with our mission and visions? What are the key questions & critical issues for Harvard-Westlake Athletics?

“There were all these open meetings to talk about concerns, issues, complements to the athletic department and things we don’t want to change,” President Rick Commons said. “What resulted is a set of principles that I think will help us to make sure that we’re living up to what it is that we, as a school, want athletics to be.”

The committee wanted to address students’ confusion resulting from some sports requiring more practice time and commitment than others.

Another discussion topic was how to aid athletes with their sports and school workload.

“I think that there was a sense that teachers and coaches weren’t communicating as well as they could and should, and students were getting caught in the middle,” Commons said. “If a student had a tournament and had a test either during that tournament or right after, it was left to the student to try to balance. The teacher sometimes was being inflexible and the coach sometimes was being inflexible.”

“When I go to a boy’s basketball game I love the fact that we’ve packed the gym,” Commons said. “But then the crowd makes some derogatory chant about some player or the other team and I’m appalled that we’re that school. I know that that happens in sports, but I don’t want that to happen here.”

As a result of the meetings, the committee formed principles under four categories: sportsmanship, excellence, balance and teamwork.

“I think that the athletic department is significantly different than we were ten years ago, so we continue to grow, which we view as a positive,” Head of Athletics Terry Barnum said. “We felt it was important for us to have some guideposts in place so that our growth is always positive and supportive of the mission of our school.”

“[By having the administration announce the athletic principles], we wanted to say Harvard-Westlake is going to decide how the athletic program functions within the whole educational experience of the school, and we all have to support,” Commons said.