Spin to Succeed: Is Harvard-Westlake worth it? 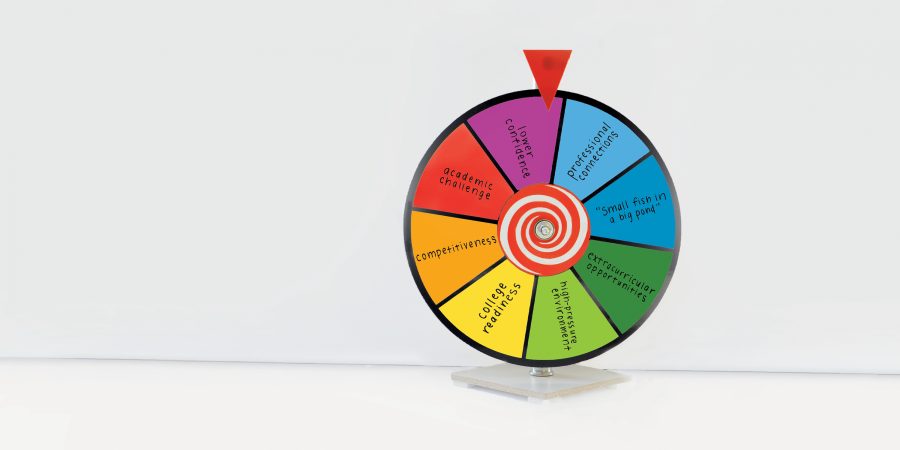 After first reading “Privilege and Pressure,” a 2013 article in the LA Times criticizing Harvard-Westlake’s intense environment Upper School Dean Sharon Cuseo said she prepared herself for an avalanche of verifying responses from alumni.

Instead, much to her surprise, she said, she received the opposite: Alums quickly and willingly came to the defense of the school, articulating their appreciation for their respective experiences and hopes that the article did not permanently alter the culture of the school.

A sophomore at Brown University at the time of the article’s release, Daniela* said she shared this sentiment of appreciation.

Daniela said she recalls repeatedly hearing the promise that after enduring the stress of Harvard-Westlake, college and life and the real world would be easy.

“There’s no question that [the school] prepared me for college so well,” Daniela said. “I learned a lot, I worked really hard and it got me where I wanted to be. I ended up wanting to go to brown because it didn’t have the competitiveness of Harvard-Westlake.”

In order to succeed at Harvard-Westlake, one must be naturally self-possessed and confident, Daniela said.

“I think that Harvard-Westlake, if you don’t have all those qualities, it’s easy to feel like you’re not capable or successful, and I saw that happen to kids all the time,” Daniela said. “I felt like everyone was always fighting to get to the top. At Brown, it was very different and far more supportive. I met kids from very progressive and relaxed schools who were also very smart and did amazing [at Brown.]”

Though Daniela noted the school’s strong relationships with selective colleges as a retrospective standout in her high school experience, Cuseo said she believes that the school’s unique array of opportunities is what sets its student experience apart.

“I always talk about our size as being a huge bonus,” Cuseo said. “It allows us to have more sports teams, more debate opportunities, more community service opportunities, more curricular opportunities and it allows students to find their people earlier. I think a lot of times students don’t have that experience of finding other people who are excited about the same things as they are until they get to college. Typically at other private schools, you have a lot of homogeneity, and here that’s different, which is exciting.”

As an Admissions Counselor at Lake Forest College, Jordan Gavens ’12 frequently meets with students who, similar to those at Harvard-Westlake, find that being surrounded by so many exceptional students makes it challenging to discover what makes them specifically smart or unique.

“I think that the competitive environment of certain schools can be toxic, in that it’s hard for an extremely smart and bright student to feel capable or special if they aren’t at the top of their class,” Gavens said.

Gavens said she continues to feel extremely lucky she attended Harvard-Westlake, and felt extremely prepared for college and life beyond. She said she is particularly grateful for her time at Harvard-Westlake because her experience directly led her to her current role at Lake Forest.

“I greatly enjoyed working with my deans during my time at the upper school. I found the intricacies of the college process so fascinating,” Gavens said. “While searching for a job, I spoke with numerous deans about their experiences in admissions, and each one of them readily volunteered to mentor me in the field. I will be forever grateful to Sharon Cuseo, and former deans Canh Oxelson and Pete Silberman, as each one of them helped me get my foot in the door, and I couldn’t be happier with my current job.”

Similarly to Gavens, Cuseo said she understands the lack of validation given to kids not at the top of their class.

“I hate to delay the gratification like this, but once you get out of this environment, you’re able to realize how spectacularly gifted and able you are,” Cuseo said. “I think that the comparisons here are rough, but when you get into even a larger competitive university environment, you’re going to start to feel pretty capable and pretty special.”

“I hate to delay the gratification like this, but once you get out of this environment, you’re able to realize how spectacularly gifted and able you are,” Cuseo said. “I think that the comparisons here are rough, but when you get into even a larger competitive university environment, you’re going to start to feel pretty capable and pretty special.”

Noah Martin ’18 said he came to the school seeking a challenge. After being at the top of his class at a small private school in New York, he said he felt ready for the difficulty of Harvard-Westlake.

My confidence was kind of shattered my first couple weeks here,” Martin said. “I never really had to study at my old school, and when I got here, I really had to try for the first time in my life. There’s a lot more on your plate, both academically and socially, and it was an adjustment that I wasn’t prepared for.”

Martin said after getting to know more about his new school environment, he began to appreciate what Harvard-Westlake has to offer.

“I definitely like it here more than I liked my old school,” Martin said. “After the initial culture shock, as I made new friends I started to understand from them why people like it here, and I agreed. I feel like there’s definitely a sense of solidarity among the students because we’re all kind of getting hammered by the school at all times. Even though I’m not at top of the class, I think I’ve learned more about myself and the world around me coming from here.”

Martin said that while looking at prospective colleges, he searches for schools that mirror core values of Harvard-Westlake and make community a priority.

“The promise when I came here is that high school would be hard, but then college won’t be that bad,” Martin said. That’s what I’m hoping for, because I’m mostly looking at fun state schools, so I’m kind of looking for a different experience in college where I can use the skills I got here, because I know that that in such a massive environment, people won’t really be checking up on me and I’ll have so much independence.”

“I think if there’s anything I could tell kids at Harvard-Westlake now, it’s that they’re all there because they’re really good at something,” Gavens said. “Even if it’s hard to see now, I genuinely think that it’ll become evident through their college experiences.”

Cuseo said that recently, the school has shifted to a more “journey-focused” approach in an effort to help kids make this realization earlier on.

Since Mr. Commons’ arrival, we started to really consciously think about what it is that we do here and what we want to do here,” Cuseo said. “I think missions are usually just fluffy words that all kind of sound the same, but I really do believe the process that we went through, and the fact that it is actually referenced a lot, is meaningful and has pushed us in a good direction. I personally am really excited about the AP maximums and the unweighting of the GPA. That’s not just lip service, that’s actual movement toward focusing on education and the opportunities that are here.”

Melanie Hirsch ’18 arrived at Harvard-Westlake in seventh grade looking an experience different of that of her elementary school, which she described as extremely progressive.

Hirsch said she chose Harvard-Westlake because she felt ready for an academic challenge, and because of the school’s robust sports program.

“I had super low expectations for myself when I came here because I thought that everyone was going to be better than me,” Hirsch said. “Everyone here, including myself, is very high achieving, which can be a good thing because success and being pushed is important.”

While Hirsch said she appreciates being surrounded by so many excellent students, she also said feels that the environment of the school becomes too competitive.

“I definitely admire everyone’s motivation,” Hirsch said. Everyone here genuinely wants to do well, which I appreciate. I don’t mind a certain level of competitiveness because it pushes me, but there comes a point when it’s too much and I wish people would just mind their own business and do what they can do instead of comparing themselves to other people.”

Overall, Hirsch said she is grateful for her high school experience.

“I’m very happy I went here,” Hirsch said. “I think HW gives the best education and opportunities possible, and I’m excited to see how that translates for me in college and life beyond.”