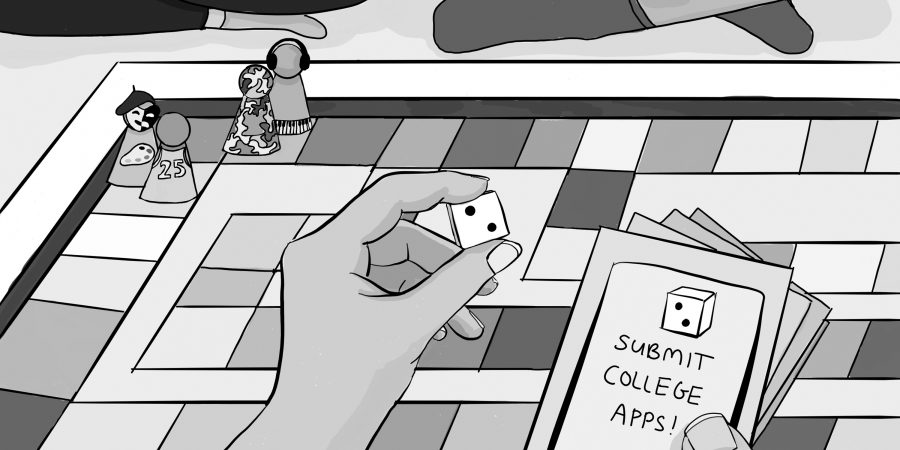 The infamous Nov. 1 deadline has come and gone for Early Decision and Early Action college applicants. For most students, juggling their applications with the workload of senior year was a struggle, and for many, hitting “submit” was a relief. They will now wait until December to receive early application decisions and potentially start working on regular decision applications.

However, as was the initial case for applicants Audrey*, Jenna*, Nate* and Christopher*, their waits and plans are still slightly out of the ordinary.

Audrey, though claiming to still be very sleep deprived, is thoroughly relieved to have submitted not only her early applications, but also her art portfolio. Producing and collecting components of her portfolio didn’t give her as much trouble as she had anticipated, she said.

In fact, her portfolio was fairly easy to assemble, Audrey said, since it was essentially a variation of her submission to The National YoungArts Foundation earlier this year.

Audrey is confident in what she submitted, which she said makes the waiting period more bearable. However, she also said her satisfaction isn’t necessarily indicative of how admissions boards will receive her work.

“I worked on [my portfolio] for a year consistently and it’s definitely very personal when you really just put that much effort into something,” Audrey said. “But art is so subjective that I don’t know how it’s going to be perceived. You don’t know if they’re really going to be in love with what they’re seeing.”

Audrey said she’s kept close connections with the schools she has the most interest in. She officially decided to apply as an Art History major, which means she will be applying with the standard pool of applicants to her early and regular schools.

For now, Audrey is waiting to hear back from Barnard College, her early decision school, in December.

“I feel nervous because you never know how these things are gonna go, but I’m glad that I got what I had to do done in time,” Audrey said.

Jenna is feeling surprisingly at ease at this stage of the college process: she submitted all of her applications well before November, passed the critical Candidate Fitness Assessment  over the summer and already completed most of her interviews.

Jenna also participated in a shadow program at West Point the weekend of Nov. 4 to retake her Candidate Fitness Assessment, have her interview and get a better understanding of the experience of a student at the academy. Unlike a typical college applicant, she may hear back from West Point very soon.

“They can choose whenever they want to [release your decision],” Jenna said. “So pretty much starting mid-November, or I think after I turn in my fitness assessment, from then until regular decisions come out, I could get accepted.”

While she is unable to formally commit to a service academy, West Point may send her a letter indicating she is likely to be admitted.

“I’ll hear back from West Point relatively soon with a letter,” Jenna said. “They do something that’s pretty different. It’s not technically rolling admissions, but if they see that you’re a really strong candidate, they’ll send you a letter of assurance.”

As long as she receives the letter of assurance from West Point, maintains a strong GPA and receives a nomination, she is most likely to be admitted.

While she said the period of waiting is certainly stressful, Jenna is relieved to put the process behind her.

“It’s good because I think a lot of people just finished their early apps the weekend of the deadline and haven’t started their other ones, but I’m done,” she said.

For four weeks between September and October, Nate missed every Thursday and Friday of the school week. While that may have been a nightmare for most students at Harvard-Westlake, Nate is excited to have spent time at potential colleges he may be interested in swimming for.

“I visited Williams, Brown, MIT, Amherst, and I took some unofficial trips to Pomona when I had time,” said Nate. “Those visits consisted of flying out, hanging out with the team for two days, eating with them, watching a practice and getting to sleep in the dorms. It was a really fun experience and I really got to meet the teams and kind of figure out really which one I bonded with the best.”

Luckily, Nate’s visits gave him some clarity about where he wants to be and prompted him to apply Early Decision to Williams College. Though he cannot formally commit to the school, he said he’s hopeful that his relationship with the coach will positively influence his admissions decision.

“On his end, the coach is going to support my application in any way that he can. Basically, since it’s [Division III], it’s not a guarantee, but it’s as close to a guarantee as he can give me,” Nate said. “It was a long process just because of having to go back and forth every week to keep the Williams coach interested. But I think I managed.”

Since Nate is not considered to be a recruit or “commit,” he is applying along with the standard pool of applicants Williams will receive.

“Now it’s just a waiting game,” said Nate. “I won’t know before anyone else, since the admissions team wants to be the one to give the decisions, not the coaches.”

Until his decision is released, Nate will continue to push through the academics of senior year and plans to continue his everyday schedule as usual.

For a student with mainly regular decision schools, Christopher is far ahead of the curve. With the exception of the UC schools, he already completed all of his applications and put together his set lists for their audition components.

Of the five total songs Christopher will need submit, he has already recorded one and plans to have completed the others before the December deadline. He applied Early Action to one of his top choices, University of Colorado Boulder, and plans to apply regular to his other top choice, the University of Southern California Thornton School of Music.

“I feel like I have a solid list of schools, and I think it’s pretty good,” Christopher said. “I had a couple of other recording sessions just to find the songs that were right to record, and we’ve already got all of them.”

Due to different schools’ dissimilar requirements for music submissions, Christopher will need to record both audio and video performances.

“I have to get into the recording studio for three songs that I’m doing for [USC] Thornton,” Christopher said. “They have to be videoed, so those are kind of second priority. The ones for [University of Colorado] Boulder’s musical theater department are due November 15, but they’re only audio so they’re not as hard to record.”

The potentially most difficult aspect of his application, the original song requirement, came rather naturally to Christopher.

“[I wrote my original song] recently, like in the past two weeks,” said Christopher. “I was kind of going through a little phase, so to speak, that kind of inspired me to write an album. So I’m just gonna pull one original song from that.”

Overall, Christopher said he is pleased with his work and will now endure the nerve-racking wait for decisions with his classmates as decision dates approach.