Rebound season ends in first round of playoffs 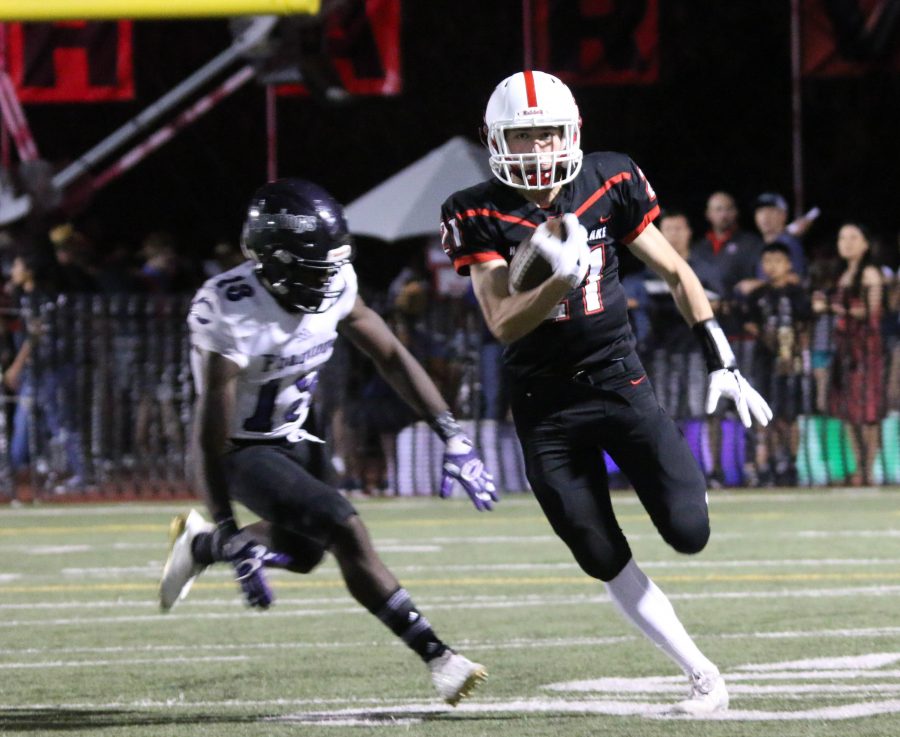 Halfback Jake Kelly '20 runs with the ball in the homecoming game against Cathedral on Oct. 7. Photo Credit: Pavan Tauh '18 / Chronicle

The football team has made significant strides since its 2016 season, improving upon last season’s overall record of 3-8 and a league record of 0-5 to this season’s 8-2 overall record and 3-2 record in league. Despite the improvement, the team’s chances of a CIF championship vanished Friday when the squad lost 49-44 to Saint Joseph’s in the first round of the CIF Southern Section Division V playoffs.

From the start of the summer, the Wolverines have not only changed their defensive and offensive line, but also the coaching staff and plays.
Players say that the team has been better this year on both sides of the ball because of adjustments the coaching staff has made to the playbook.

“I believe our offense is more explosive this year,” halfback Thomas Glover ’18 said. “I think that we have players on our offense who can give us big plays any time they touch the ball. Our defense is more confident this year than last year. I think that our scheme is also a better design for the players we have.”

Head Coach Scot Ruggles, who relinquished offensive playcalling last season, assumed the role of offensive coordinator this year, and the result has been a quicker-paced offense.

“Coach Ruggles calls plays now, and he runs a really fast, uptempo offense, which wears defenses out, then tries to knit pick a little hole that occurs once the defense is tired,” USC commit and offensive lineman Liam Douglass ’18 said. “Jameson [Wang ’20] has done a really good job for us, we need that offense and we have some great playmakers like Cam [Jones ’18] and Thomas [Glover ’18].”

Ruggles has also worked to base the new, uptempo offense around the talents of Wang, using the read-option to best utilize his talents.
Wang has emerged as a talented dual-threat quarterback who can pass from the pocket or rush out of the read-option.

With 15 rushing touchdowns and over 20 passing, Wang leads the team in not just passing yards but also rushing yards.

“Last year I feel like we were young, some of us were trying to figure out how to play football,” Douglass said. “This year I feel like we all bought in, there are guys who bought into the whole ‘we’re going to go as far as we can and win a CIF championship’ mindset. Obviously with Coach Ruggles calling the plays we get them a lot quicker, and we are able to move faster which plays to our strengths. Also our defense is so much better than it was last year with Defensive Coordinator Patrick Cartmill.”