Transforming the Policy: Students and faculty reflect on the experiences of transgender people on campus 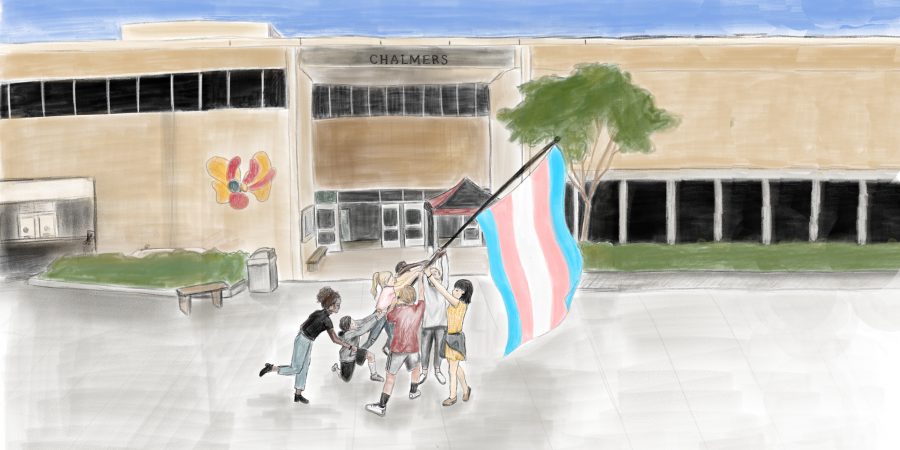 Uriah Celaya ’18, who identifies as transgender, remembered when his French teacher Simona Ghirlanda asked to talk to him after class. Nervous to speak with her, Celaya tried to recall what he could have done wrong.

“I’ll protect you like a mother lion protecting her cub if anyone tries to mess with you,” Ghirlanda said, offering her support and giving him resources to consult.

Despite feeling initially afraid, Celaya described the experience of coming out to his peers as transgender as primarily positive. At the beginning of this year, Celaya’s dean, Jennifer Cardillo, sent an email to his teachers, dean group and students in his classes. She explained that he now identifies as male and instructed his peers and teachers to use his correct pronouns and name. After the first week of coming out, Celaya said he felt significantly more comfortable on campus.

“No one’s really been disrespectful,” Celaya said. “Other than misgendering, which I know is accidental I hope, the reactions have been good.”

California Governor Jerry Brown signed a bill Oct. 15 that will allow California residents who do not identify as male or female to indicate their preference on driver’s licenses and birth certificates with an ‘X’ in January of next year. The bill will also make it easier for transgender residents to change the gender they are legally classified as by removing the previous requirement for a psychologist’s note to make this legal change.

In an effort to help everyone feel accepted on campus, the school administration is working to implement policies promoting gender inclusivity, Diversity, Equity and Inclusion Coordinator and science teacher Nate Cardin said.

“Realizing they can go in January of 2019 and have that changed and be seen as who they are has to have such a positive impact on their self worth and their morale,” Cardin said. “If you have people feeling better about themselves and feeling seen and acknowledged, then they can bring that into the community. That’s why I think representation across the board is so important.”

Similarly, Cardin said that he hopes to make it easier for students to change their gender on Didax and official school documents and to offer a third gender option by the end of the school year.

In order to provide a space to further discuss these issues and to pursue change on campus, Cardin said he is working to form a committee consisting of faculty and staff to tackle gender inclusivity concerns at Harvard-Westlake. Cardin said the committee intends to consider ideas from other schools in order to learn from the successes and difficulties that other institutions have faced when adopting more gender-inclusive policies.

“I’m excited that the school is super supportive of these changes, and they’re also supportive of us taking a step back to figure out what’s the best thing to do and what’s the way that is going to make as many people feel as included as possible,” Cardin said.

In a Chronicle poll of 266 students, 86 percent of respondents said they think the all-gender bathrooms are a positive addition to the school; however, not all students have felt comfortable using the restrooms.Last year, it was common for students to lock the library’s all-gender bathroom and pull it closed so no one could get in, English teacher Darcy Buck, who identifies as gender non-binary, said.

“I think that the perception of our institution is that it’s an extremely queer-friendly and queer-supportive environment, and I think that uniformly our queer students will tell you that that’s not the case,” Buck said. “They often feel marginalized, they often feel bullied and they feel that it’s very difficult to come out.”

Quinn*, who identifies as transgender, remembered walking out of the all-gender bathroom to students laughing and whispering under their breath.
“I think that a lot of students don’t really understand,” Quinn said. “There are a few that are outwardly transphobic, but I think that the majority of people just really don’t know that much or are just internally transphobic.”

Quinn said seemingly small actions, such as insensitive jokes regarding gender identity, can have a large impact on queer students.

“That’s funny I guess, but that’s also the life I’m living right now,” Quinn said. “If you make ‘did you just assume my gender?’ jokes it makes trans people sound like they’re always getting unnecessarily upset.”

Celaya said his entire gender identity experience was not completely positive, as he received some negative feedback from his family.
“I really do feel like Harvard-Westlake is a good place to come out,” Celaya said. “I came out to my mom and that didn’t go the best way, so I know the other side of it too where coming out might not be so great.”

Although Celaya said he considers the school a safe community where he can embrace his gender identity, he recognizes that the school’s history as separate boys and girls schools can make it difficult for it to be naturally inclusive.

Last year, in the hope that it would create a more inclusive community and prevent students from being confined to identifying as a certain gender, the administration and Prefect Council decided to have all seniors wear white robes at graduation.

In response to the gender separation on Prefect Council, members of the middle school GSA have started an initiative to make student government positions welcoming to gender non-binary students.

Cardin said that although this system was put into place with the intention of providing more equal representation, the consequence is that students who are gender nonconforming or gender non-binary don’t know where they fit at all.

Both Quinn and Celaya said that since the administration is working to make the school more inclusive, the attitudes of other students on campus toward the LGBTQ community will ultimately be the biggest factor in determining whether or not the school can be considered a safe place for students to come out.

Buck said education is the best way to ensure the student body is aware of the spectrum of gender identities and is welcoming of all students.

“I think what is needed is that these conversations about gender begin in seventh grade when you get to Harvard-Westlake,” Buck said. “We need to start having those conversations very early on so that by the time we get to this point, there aren’t people who are arguing that there are only two genders or that trans people are making it up.”

Rivera de León said that once students are familiar with the gender spectrum, they will speak with more sensitivity and realize the potential harm their words can cause.

“I think it is very easy to judge something that you’re uncomfortable with, so moving forward, the best thing for everyone to do is just keep an open mind and try and see where people are coming from,” Rivera de León said.

Cardin said his goal is to ensure that everyone in the Harvard-Westlake community feels a sense of acceptance and belonging.

“Being seen and recognized for who you are is so essential,” Cardin said. “We don’t always have to all agree on every single topic, but every single person should come to this campus and be seen for who they are and not feel like they have to shy away from anything they want to do.”