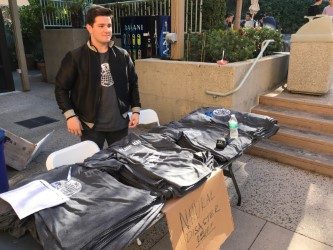 T-shirts sold for $25, and all of the proceeds went to benefit to the Global Giving Organization for natural disaster relief. The organization has already collected more than $15 million  for victims of the three hurricanes, with a majority of funding benefiting Puerto Rican relief efforts.

Settelmayer said that charity is an important aspect of his company’s motto, and he is inspired by the generosity of members of the school community.

“I think that there is a responsibility that we hold to help those that may be unable to help themselves,” Settelmayer said.

Settelmayer said that he started the company because he felt restricted by the strict uniform policy at his previous school and wanted a way to discover his sense of style.

Settelmayer said that his fundraiser is one of many charitable projects to come.