Jam-packed: Students share their opinions on the art and athletic requirements 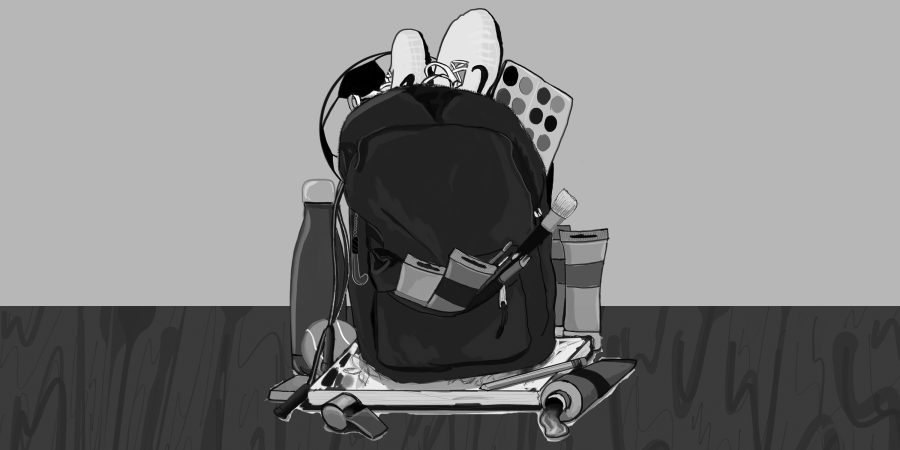 Watching her new classmates slide into a split on the black floor, Jess Grody ’19 felt nervous and out of place.

“What if everyone’s better than me? What if it’s too difficult?” she thought, scanning the room through the mirrors that lined the wall.

She had only signed up for the class to fulfill her P.E. requirement.

“I wasn’t excited at all,” Grody said. “At the beginning I was just really nervous and kind of resented the requirement.”

However, as the course progressed, it became one of her favorite classes. She said she came to appreciate the supportive environment, academic break and exercise it provided, and continued to take dance for another full year at the Upper School.

“The studio ended up being a really nice place to hangout where I felt comfortable,” Grody said. “I think it’s important to do things that are outside of your comfort zone and take classes you wouldn’t normally take.”

Every student is required to complete six trimesters of P.E. or interscholastic sports and one year of performing or visual arts before graduation. The art and athletic requirements are set in place to ensure that students are well informed across all disciplines, upper school dean Celso Cardenas said.

“The job of a school is to educate the whole person, and I think art classes are a part of that,” Visual Arts Department Head Cheri Gaulke said. “It’s developing that voice within all of us.”

Even though she knows some students feel restricted by the requirement, Gaulke said she has also seen it spark a passion in students who never expected it to.

She remembered Alex Popof ’10, who took Video Art I as a senior because he still needed art credit. As an adult and professional, he revisited the skills that he was exposed to in high school to start his own company that provides body cameras to police officers.

Students attending LAUSD schools are required to complete one year of visual or performing arts and one year of physical education in addition to the academic core, according to the LAUSD website. Since the University of California system expects students to have taken those courses, and many students apply to UC schools, the Harvard-Westlake requirements serve to ensure that students are eligible, Cardenas said.

“There’s so much that students can benefit from having enrollment in art classes,” Cardenas said. “It’s the idea of having one class in your day that allows you to think very differently about your work and gives you a very clear sense of mind. There’s this great benefit to creating, so I would encourage students to do the art classes.”

Gaulke and Director of Upper School Dance Cynthia Winter both said they have had many students who take their classes with the goal of fulfilling a requirement but are inspired to continue studying a specific discipline for the remainder of high school.

“I have students who take a video class because they think, ‘Well, if I have to take art, I’ll take video because I can’t draw or paint,’” Gaulke said. “Somehow, video is technology so it feels more accessible. Then after taking it, they realize that they love it and they take it for three years.”

Despite the fact that some students find their passion as a result of requirements and continue to take classes in those areas, others said that the restrictions the requirements cause outweigh the possible benefits.

Since the school implemented a policy that requires lunch periods in 2015, limiting students to seven classes per year, some students think that the requirements inhibit their ability to take the classes that they are genuinely interested in.

Mason Hooks ’20 took computer science for two years at the Middle School but could not take it again this year because he takes Three-Dimensional Art to fulfill the requirement. He was advised to complete the requirement during sophomore year and said he didn’t have any other option than to take a break from computer science.

“I’m not really interested in art in general,” Hooks said. “The class is fine but I’m not passionate about it. Computer science is just something I’d rather be taking, to be honest.”

Similarly, Octavia Tyagi ’19 was hoping to take Philosophy in Art and Science or AP Microeconomics and Macroeconomics her senior year, but will not have room in her schedule because she has not yet fulfilled her art requirement.

“It’s just frustrating that I’m not going to be able to take more classes that I want to pursue in the future,” Tyagi said. “We have so much freedom to take classes senior year, yet I still have to take pottery, which is not a particular interest of mine, and I don’t think it’s a necessity.”

As the school moves in a direction to encourage students to take classes that they are interested in by instating a new AP limit and unweighing GPAs, Cardenas said he hopes the art department will grow.

“I think one of the biggest deterrents right now with regards to specifically the arts is students are constantly thinking about their GPAs,” Cardenas said. “If you take that out of the equation, students will dive into some of the robust offerings that we have in the art department.”

Tyagi said that both the requirement and the new limit stifle students’ abilities to take the classes that they are passionate about.

“I believe that with the progressive freedom to choose our classes as we move [through] the Upper School, it seems strange to have a requirement to take a specific class,” Tyagi said. “If someone wants to take entirely APs and no art, I think that by senior year, when most of them are legally adults, they should be able to make that choice.”

There are some reasons that students can be exempt from the athletics requirement, such as playing a sport outside of school, Cardenas said. However, he also said the administration would rather students complete the requirements in school, and thus offer after-school yoga and in-school P.E.

“We still want them to get the benefit of doing these classes at Harvard-Westlake with our faculty here,” Cardenas said.

“If this is the sport I want to do, this is the path I have to take,” Baskin said. “Since I can’t get a lot of credit, it feels like they’re not really supportive of it.”

Although some students do not think the requirements are necessary, Cardenas said he thinks it is a valuable part of the education that the school provides.

“I think having an art requirement and a P.E. requirement ensures that students are delving into all areas that, sometimes, once they get to college, they don’t have to do,” Cardenas said. “Doing them in high school allows them to be able to flex those creative muscles.”