Fires cause midterm schedule to change, lead to outpour of support 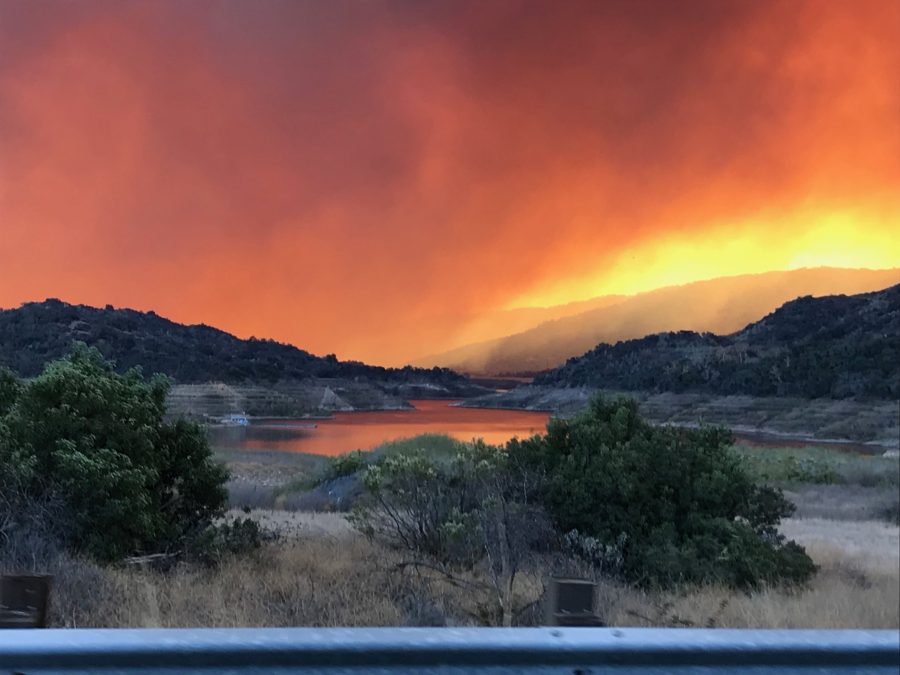 Smoke from the Thomas County fire covers Lake Casitas in Ventura. The fire, which was the largest wildfire in California history, forced some community members to evacuate. Credit: Printed with permission of Henry Jugan

When Grace Burton’s ’20 dad woke her up in the middle of the night and told her they had to evacuate, her trumpet, family photos and a handful of clothes were some of the only items she could grab.

The Skirball fire was spreading through Bel Air early on the morning of Dec. 6, leaving her with little time to decide what to bring as she left her home.

“I wanted to take all of the stuff I wouldn’t be able to replace,” Burton said.

An illegal cooking fire at an encampment in the brush next to Sepulveda Boulevard caused the Skirball fire, which burned 422 acres, damaged 12 structures and destroyed six, according to the Los Angeles Fire Department. The Skirball fire, as well as the Thomas fire in Ventura, Rye fire in Santa Clarita and the Creek fire in Sylmar, caused poor air quality that shut down both campuses Dec. 6 and 7.

As a result, students lost two days of review and preparation before Mid-Year Assessments, which were supposed to begin Dec. 11. To compensate, the administration altered the assessment schedule.

Students returned to school Dec. 8 and had a review day with no X periods. The reading day, which was originally scheduled for the middle of the assessment week, was moved to the beginning of the week.

Without all of the materials that she needed to study for Mid-Year Assessments, Burton said she was grateful for the amended schedule.

“It was just really stressful and I didn’t have an opportunity to study, so it was very helpful that we could have the extra day off before midterms started,” Burton said.

President Rick Commons said that most students he talked to echoed Burton’s sentiment, saying they were appreciative of the schedule that the administration made in response to the fires. However, Rileigh Goldsmith ’20, who also had to evacuate, said that she wished there had been one more review day.

“I didn’t have time to take all of my books with me, which made it a lot more difficult,” Goldsmith said. “I think it was an added stress that they weren’t really sensitive of. I wish I could have had one more day of class instead of just a day off.”

Some teachers altered assessments to compensate for lost review time and to accommodate those who were affected by the fires. Additionally, classes including Precalculus: Trigonometry and Functions, AP Human Geography and Unconventional Leadership postponed assessments until after winter break.

“I feel very lucky that I was not affected by the fire,” Eve Baxter ’19 said. “However, I know that a few people in the community had to evacuate and students and their families or teachers were affected in a very devastating way, so it was very considerate of some departments to amend the finals with those who were affected in mind. I think it definitely lifted a lot of stress from those students who were affected.”

Although most students and faculty were not affected by the fires, at least one family’s house was damaged or destroyed, Commons said.

“Even one tragedy is enough to be sobering and to deserve our sympathy,” Commons said.

Almost 300 students showed support for those who were affected by the fires by joining the HW Fire Relief page on Facebook, which was started by sophomore prefect Michael Lehrhoff ’20 and sponsored by Prefect Council as a platform for students who were displaced to reach out for help.

“The idea is to foster a centralized platform for the HW Community to help each other throughout and after the fires,” Lehrhoff said. “I hope that it remains a beneficial space for the community to support and thrive in the coming days and weeks. There is still a lot of work to be done, and hopefully this platform can connect and spread support throughout our Harvard-Westlake community.”

Kyle Hearlihy ’19 took to the page to ask students to donate clothes to victims of the Ventura fire, which Cal Fire declared the largest wildfire in California history.

He and his mother, girls’ basketball coach Melissa Hearlihy, collected enough clothes to fill a suburban and flatbed truck in Hamilton Gym on Dec. 10.

Melissa Hearlihy decided to collect clothes after she spoke to basketball coaches at Ventura High School, who said that four families in the basketball program at their school had lost their homes in the fire.

“People wanted to help,” Kyle Hearlihy said. “They just had no outlet, and this was their outlet.”

He dropped off the clothes at Ventura High School after the drive.

“I felt helpless, but now that I could do this for those people it made me feel way better,” Kyle Hearlihy said.

In order to donate, Esther Grover ’19 took a bus to the Upper School from West Hollywood and walked up Coldwater carrying two bags filled with clothes.

Grover said she had been affected by house fires before, so she empathized with the victims of the recent fires and wanted to help.

“I know how scary and devastating it is, so I wanted to help in any way that I could,” Grover said. “I was just glad that my family’s old clothes could help.”