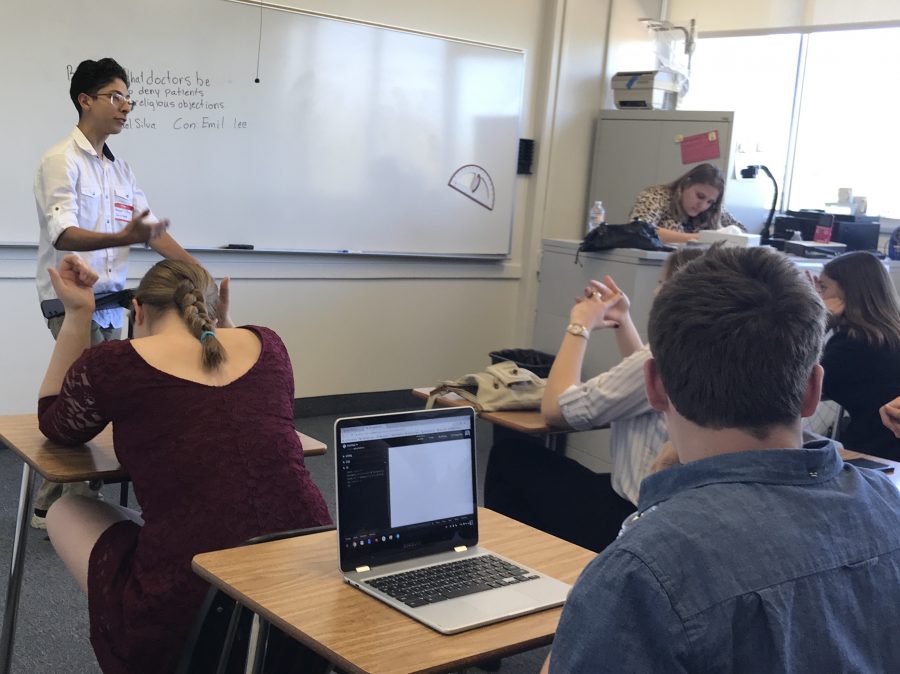 A student debates at the Junior State of America conference in Chalmers. Credit: Sophie Haber/Chronicle

The Harvard Westlake chapter of Junior State of America hosted a conference on civil rights that gave students the opportunity to participate in a variety of debates and activities Feb. 3.

Participants debated topics including the effectiveness of the Women’s March, the pay that prisoners should receive for their work and a fictional debate about whether or not Star Wars accurately portrays facism.

Lucy Kim ’19, a member of the JSA cabinet as convention support staff, where she helps run and organize the larger conferences, participated in the time machine debate. In this debate, participants pretended they were in a specific era and argued from the point of view of someone living in that era.

Kim debated over whether or not Malcolm X should be considered a leader of the civil rights movement.

“I don’t have the strongest opinion about that [topic], but one of the things I really like about JSA is that it forces you to look at issues from all sides, even if it is not own perspective,” Kim said.

Students also participated in customized activities, such as one in which participants debated while playing musical chairs.

JSA is a nationwide organization that works to strengthen American democracy by educating high school students on how to be leaders in a democratic country, according to its website. They have many chapters throughout the country and have a government made up of governors, senators and assembly members.

The one day conference was run by students who are involved in JSA.

“The one day [conferences] are really a great way to pique interest about JSA because [they are] not the biggest commitment but also a great way for people to stay involved in JSA year round,” Kim said.