Report to HQ: Is HQ a distraction in the classroom? 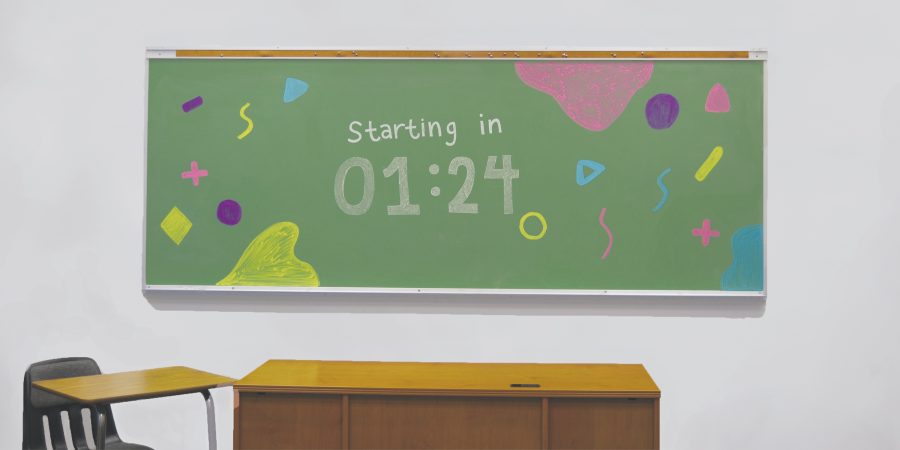 Ryan Stanford ’19 had a secret weapon for the HQ Trivia Christmas round: her grandma. Anticipation built as she and her sisters approached the game’s 12th and final question. Finally, the question flashed across the screen: “Which U.S. President has never earned a Bachelor’s degree?” “Harry Truman!” her grandmother exclaimed, winning Stanford both the round and the game’s real cash prize.

Since HQ Trivia’s iOS launch in Oct. 2017, the app has developed a large fanbase, becoming the thirteenth most popular iOS app in the United States as of Jan. 1, according to Quartz, a news website owned by Atlantic Media.

HQ’s national popularity peaked during their special game at Super Bowl LII halftime: a record number of more than 2 million players competed for 20,000 dollars, their biggest prize ever.

Even though Stanford started playing HQ within a few weeks after the app was released, she said she got her first win during the Christmas HQ Trivia game, a $5.17 share of the $2,000 pot.

“[Winning] was the most validating thing,” Stanford said. “I had been playing HQ for a long time at that point. I figured I was never going to win.”

The app demands the attention of a noticeable fan base each day at noon.

Upper school dean Celso Cardenas said he is unfamiliar with the app but has seen students playing it in his office.

“It was during a free,” Cardenas said. “They were counting down and waiting for it to come on so they could play.”

Cardenas said he thinks in the last few weeks, HQ has circulated around campus to the point where he began to hear about it, but he does not know how widespread it is yet. Although he has not heard of students playing in class, he imagines that it might be a growing concern.

Math teacher Adam Varney said that he knows very little about HQ but sometimes sees students in his fifth and sixth period classes on the app. He said the app can be distracting but has a creative method to keep students focused on classwork.

“[I] take their phone, turn their phone over and select the wrong answer for them,” Varney said.

Varney also said that he would prefer if HQ’s playing times were later in the day so that the app wouldn’t interfere with student’s learning in class. He also explained that a later start time would encourage productivity.

“I think [HQ] should start around midnight because then I think they would have a higher player base, as all our students would still be up doing work,” Varney said. “[HQ] could be a nice companion during the evening hours when there’s cramming for exams the night before, rather than while they’re in class trying to learn.”

Varney said he thinks if playing in class becomes a greater distraction to students, the school should regulate the use of cell phones altogether.

Cardenas also said he thinks if playing HQ at school rises to a distracting level, the administration might make a no cell phone policy or be more strict about use during classes.

“If we see it impeding on the education of students throughout the day, then I think we would want to have teachers enforce it a little,” he said. “I know some teachers are a little bit more lax about students having cell phones out and whatnot, so we would probably just try to do something to curtail it.”

Some students, however, feel like the impact of HQ on campus is not enough to establish any rules or limitations on when or where students may participate in the game.

Michael Lehrhoff ’20 said he disagrees that HQ is too much of a distraction to be a concern based on the time students spend playing it. He said he enjoys playing HQ because of the live aspect and the exciting prospect of winning money.

“Because it’s only on for about 15 minutes during one part of the school day, I don’t think it interferes with school if someone just plays during a free period,” Lerhoff said.

One day in Student Government class, after Head Prefect Julia Cosgrove ’18 and her fellow prefects finished up their work, they decided to play HQ.

By question 12, each student gathered around Cosgrove’s phone, as she was only one correct answer away from victory.

“I had never made it that far, and I was proud of myself for guessing so many of the questions correctly,” Cosgrove said.

When no one knew the answer to the final question, Cosgrove was left to randomly guess.

She guessed incorrectly, but said she found it more rewarding to focus on the fun she had playing trivia rather than the money she could have won.

“I honestly did not care about the end result,” Cosgrove said. “I was just happy to have made it so close.”

Some students, like Coco Kaleel ’20, play HQ to destress rather than compete to win money. Kaleel said she does not have the app on her phone, choosing to play with her friends on their phones instead.

“I enjoy playing HQ because it is low stress with a fun reward and has fun questions,” Kaleel said. “If nothing else, you can learn a bit of trivia.”

Kaleel, who plays exclusively with friends, also said she thinks that using the app should not be restricted at school because of its brief air-time and the relatively low disturbance it makes.

“I think HQ should be permitted so long as it isn’t played in class,” Kaleel said. “Since it is short and only twice a day, only once during school hours, it should be fine. Compared to many other apps, HQ is not a major distraction in my opinion, and should definitely be permitted.”