24/7 School: Punishment for actions off campus 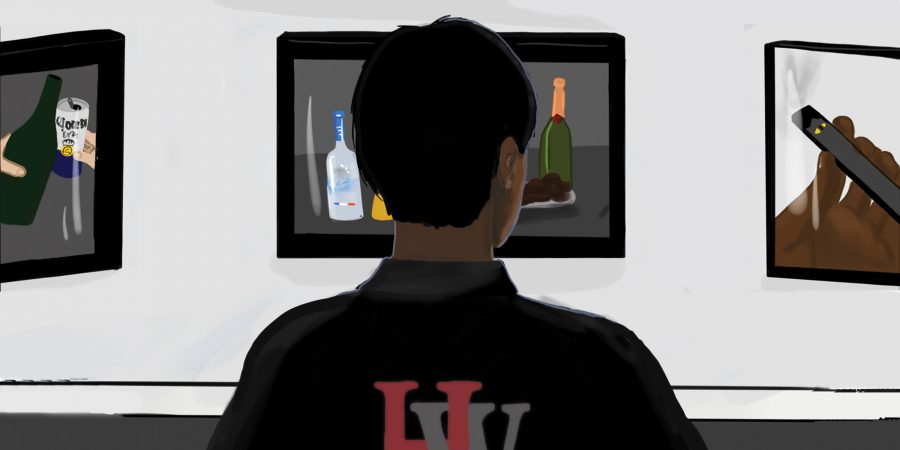 Joe* ’18 glanced anxiously around the grocery store, his heart racing, wary of skeptical onlookers. Taking a deep breath, he placed the vodka bottle in his shopping cart, reassuring himself that it was legal.

In a foreign country where the drinking age is 16, Joe said his friends promised him that drinking would make the school trip more fun. Hours later, however, a chaperone smelled the alcohol in his hotel room, and he and his friends were promptly suspended for three days.

They had violated the school’s disciplinary policy for outside of school activities, which dictates that the school can punish students for their actions even when they are not on campus during school hours.

The school reserves the right to punish any behavior that “constitutes a major rules infraction, is a violation of the basic standards of ethics and morality or is illegal,” according to the Upper School Student/Parent Handbook.

“It was a school-sanctioned trip, and I personally signed the liability form where I said it was something I wasn’t going to do,” Joe said. “I think [peer pressure] made me act the way I did, and I regret it of course. You’re going to another country representing your own country and your school.”

In several nationwide cyberbullying court cases, the court held schools responsible for harm done to students online, which Church said was major impetus for the policy.

“Legally, schools are being brought more into the situation, so it becomes under our purview,” Church said. “Who you are as a person is extended onto that online presence. Social media exists everywhere, including on our campus. If we knew about two students doing something really harmful to each other on campus, we would do something about it. So the question is, ‘where does that extend?’”

However, most violations of the outside-of-school disciplinary policy do not involve social media, Head Prefect Julia Cosgrove ’18 said.

Cosgrove also said violations of the school’s policy for outside-of-school behavior only constitute about 10 percent of honor board cases overall.

Despite the infrequent violations of the policy, Cosgrove said she agrees with the school’s decision to continue to enforce the policy.

“I think it’s a fair rule, but it’s hard to punish somebody when they did something on a Saturday night off-campus,” Cosgrove said. “However, as a student at Harvard-Westlake, you represent the school no matter where you go. If you technically violate the honor code, then I think that is under the school’s jurisdiction.”

Caught up in the freedom of a school-sanctioned trip, she said she accepted a friend’s offer to smoke weed one night. Once the school found out about her actions, they kicked her off of the trip and suspended her for one day.

“I don’t have that much regret because it was a very impulsive decision,” Lindsay said. “We didn’t go out with the intention of getting high. The amount of independence we had on the trip played a part in our lack of reasoning. It was almost as if we forgot we were on the school trip.”

Joe, in contrast, said he does not feel the school is justified in punishing students for behavior outside of school. The actions of students outside of school are out of Harvard-Westlake’s domain, he argued, and the school should allow them to enjoy their own free time during their formative years.

“The school [values] their reputation highly, and I think their way of making that reputation stay at such a high standard is by trying to control students outside of school,” Joe said. “I disagree with it because, to a certain extent, teenagers will be teenagers, and we are all developing and learning about ourselves.”

Although he believes he deserved some form of punishment, Joe said he was surprised at how drastic the consequences were.

He said he was unaware that it would end up on his transcript, which colleges would be able to see and reduce him to that single incident.

“I don’t feel as though my reputation has been tarnished, but I do think it sucks,” Joe said. “When someone doesn’t know you and what type of person you are, they see that, it’s like, ‘Oh, this is the type of person you are.’ That sucks, but at the same time, having the school hold me accountable for my actions has helped me a lot.”

The threat of punishment has led some students to be more cautious of their behavior outside of school.

Deterred by the actions the school has taken against students who have violated the school’s policy, Alissa* ’19 said she has not been able to enjoy parties as much as she used to.

“When I go to parties, I actively try to be more reserved, and I usually get scared to drink or anything like that,” Alissa said. “In a sense, I understand that the school is trying to protect themselves and us as students, but I feel like the rule is just taking away an important part of our high school experience.”

Alissa said that restricting high school behavior only creates more problems and does not effectively act in the way the school intends it to.

As a result, she said students will instead behave more impulsively in the future.

“It’s not really protecting us,” Alissa said. “If they restrict us in high school, more kids are just going to get crazier in college. Since they aren’t under the intense supervision of their parents, they will have freedom that they never had before. When they aren’t used to this freedom, they’re more likely to flout it.”

Although the rule can be harsh, Lindsay said the school helped her move forward in a positive way, so she could use the experience as a productive lesson from which to grow.

“[The school] definitely helped me make the best out of it while at the same time acknowledging what I did was not right,” Lindsay said. “It was kind of a wake-up call. It helped me to realize how careless my tendencies were, and it helped me to be more conscious of decisions I make, especially when it’s something to do with school or a school trip.”