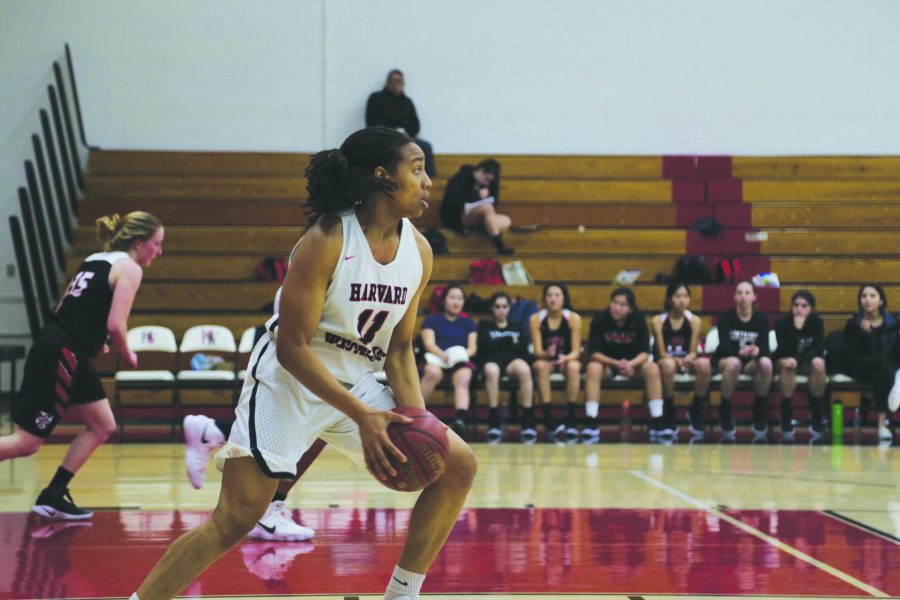 HARD IN THE PAINT: Forward Jayda Ruffus-Milner ’18 drives against FSHA at home in a 64-33 blowout win Jan. 25. She averages 10.7 points per game and 7.6 rebounds per game. The team is 2-0 against FSH this season winning each by more than 30 points. Wing Melanie Hirsch ’18 finished 13 points, 10 in the first quarter. PHOTO CREDIT: Luke Casola / Chronicle

Coming off of a 25-5 overall and 6-2 league record last season, the girls’ basketball team ended its regular season with an undefeated league record and claimed the Mission League title. The team finished with an overall record of 22-4 before playoffs.

“The bonds I’ve created with my teammates have helped boost my confidence in myself and those around me, since I know all my teammates are capable of doing great things to help us win,” Wong said. “The team has benefitted from the support on the bench, encouragement from each other and even the little things like high fives after making a great play.”

The team had a point differential of +244. The team also won every game in league, only three of which were won by less than ten points. The squad was able to claim the title after beating Chaminade on Feb. 8.

With the team chasing a league championship, forward Jayla Ruffus-Milner ’18 had to exit early with a shoulder injury.

“It’s a really great feeling, especially since we haven’t won since 2011,” guard Melani Hirsch ’18 said. “We came into [the game] determined to win it for [Ruffus-Milner] since she couldn’t play and she’s been an integral piece in getting us here.”

The team also finished the season strong on a seven-game winning streak after losing to Centennial on Jan. 15.

Head Coach Melissa Hearlihy said that she has a preparation plan for the girls’ playoffs.

“In preparation for playoffs, we need to balance practice time with rest,” Hearlihy said. “It is late in the season, and we have played a very tough schedule, with our two toughest league games being the last two games of the season.”

Hearlihy leads her team into the Open Division for the second year in a row.

“We will compete in the Open Division,” Hearlihy said. “Therefore, we will play three Saturdays in a row, leaving the weekdays for practices. During this time of the season, that can be a plus and a minus.”

Wong added the team’s attitude is also very important as they head into playoffs.

“The key to our success is to stay together as a team and be positive,” Wong said. “We know how good we are and the only thing that will beat us is ourselves. If we play our game and believe in each other, we can achieve our goals.”

Center Kiki Iriafen ’21 said they are prepared for playoffs.

“We expect to see some great competition and some very talented teams,” Iriafen said. “But we have worked so hard, we don’t let anyone’s record or the name on someone’s jersey define how we play. We always give it our all no matter what.”