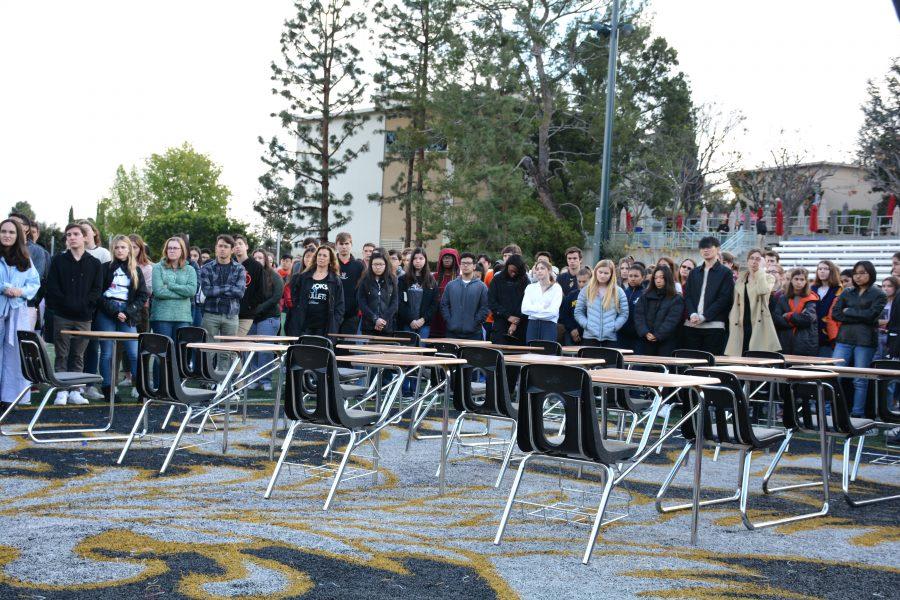 Students, faculty and staff walked out of class as part of the National School Walkout Wednesday to honor the 17 victims of the Marjory Stoneman Douglas shooting last month in Parkland, Florida.

The community gathered around 17 empty desks and victim profiles on Ted Slavin field as student organizers Rachel Grode ’19, Lauren Juzang ’20, Abbie Howell ’18 and Eli Timoner ’18 addressed students about ways that they can evoke change and encouraged them to register to vote.

“I didn’t want this walkout to be small and meaningless,” Timoner said. “I didn’t want kids just walking out and not knowing what to do. I wanted it to be very powerful and I wanted to help other kids’ voices be heard.”

The empty desks placed in the middle of the field symbolized each of the victims.

“It’s what’s left behind by these kids,” Timoner said. “These spots are empty and their lives are taken. That’s where they should’ve been. They should’ve been in class, and instead they will never get to do that again.”

Screenshots of texts that students at Marjory Stoneman Douglas sent during the shooting and bios of students and faculty that were killed lined both sides of the field. A video looped in the background of speeches that members of the Never Again movement made to government officials.

“It really humanized these victims instead of just hearing about it on the news,” Angie Tan ’19 said. “These people are our age and they had interests and did things before. It made it real and reopened the discussion.”

After the walkout, student organizers set up a table on the quad with fliers that gave information about the walkout. Students could buy t-shirts that read “enough is enough,” and sign petitions to ban assault rifles.

“This is a subject that means a lot to me and I feel really passionate about it,” Tan said. “I just wanted to be a part of something bigger.”

The organizers were inspired to get involved by the students at Marjory Stoneman Douglas for speaking up in the wake of a tragedy, Timoner said.

“I think it’s just incredible that we’ve banded together and so many people wanted to work on this across all grades,” Juzang said. “It’s really cool to see.”

The walkout was school sanctioned but organized by students. No detentions or suspensions were given to students who walked out of class. However, Director of Student Affairs Jordan Church said it was important that the walkout was student-led, in conjunction with the initial mission of the National School Walkout.

“A lot of people came up to me and congratulated me,” Howell said. “It felt really great to know that I did a positive thing. We were just trying to unite people and make change, and I think the school really came together.”