Black Panther: Inspiring a conversation about race empowerment and representation 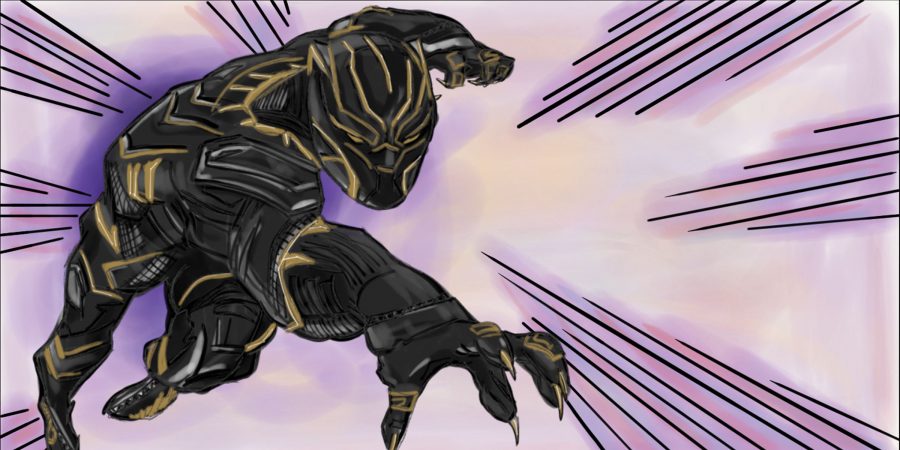 By the time Charles Flippen ’18 was five years old, he was already well versed in the world of Marvel and DC comics.

Inheriting his love for superheroes from his father, Flippen vividly remembers trips to the comic book store and his amazement at his dad’s cooler stuffed with the comics he grew up reading.
Though an ardent fan of the Avengers and Batman series, Flippen said that reading “Black Panther” as a young boy was particularly influential for him.

“When I first started reading ‘Black Panther’ comics, I was so excited because I got to see a superhero that looked like me,” he said. “He had a reputation of always knowing the right thing to do which made him someone I aspired to be like. Even though he’s a fictional character, I saw him as a role model.”

The comic’s origins date back to the late 1960s. Writer, editor and publisher at Marvel Comics Stan Lee and writer and artist at Marvel Comics Jack Kirby, both white men sympathetic to the Civil Rights Movement, introduced “Black Panther” into the Marvel world. His first appearance came in July of 1966 in Fantastic 4 #52.

In 1998, comic book writer Christopher Priest expanded the Black Panther mythology in a 60-issue series, and in 2016, author Ta-Nehisi Coates wrote another “Black Panther” comic series to be followed by the 2018 screenplay.

The story centers around T’Challa, the Black Panther and king of Wakanda, an isolated, high-tech African nation that derives its wealth from the powerful metal substance, vibranium. Conflict arises when Ulysses Klaue, a mad scientist with his eyes set on stealing Wakanda’s vibranium, and Killmonger, who has a personal vendetta against the nation, threaten the sanctity of the utopian state.

The 2018 movie starring Chadwick Boseman, Michael B. Jordan, Lupita N’yongo and Danai Gurira is the latest film to earn more than $1 billion, the 33rd film in history and the fifth Marvel movie to ever do so. 52 percent of Harvard-Westlake students have seen Black Panther, according to a Chronicle poll of 360 students. This resounding success is both empowering and significant, Flippen said.

“A lot of people didn’t think [‘Black Panther’] was going to do well because it’s an entirely black cast,” Flippen said. “The worldwide success that this movie had will hopefully show studios that movies with all black casts and mainly minority casts can be successful, which will hopefully allow for a shift in Hollywood where people will start making more of these movies.”

In terms of box office sales, “Wonder Woman” was the most successful movie of the summer of 2017. Following its release, some people echoed a similar sentiment to Flippen’s, noting how its success dispels a Hollywood myth that movies centered around women or people of color wouldn’t generate an impressive box office revenue.

During a segment of the 90th Academy Awards, actor Kumail Nanjiani highlighted the importance of diversity in entertainment, referencing “Black Panther,” “Wonder Woman” and “Get out.”

Though inspired after seeing both “Black Panther” and “Wonder Woman,” Nicole Bahar ’18 felt a different sense of empowerment in viewing the respective movies.

“What I loved about ‘Wonder Woman’ was how awesome [the character] was, but it was also very unattainable because she was one stunning woman who was all-powerful,” Bahar said. “Even though she came from an island of powerful women, it was still very much about her. In Black Panther, pretty much every woman in the movie was amazingly powerful.”

Bahar is referring to the Dora Milaje, the group of Wakandan warriors trained to militarily defend the king. Recruited from all the tribes throughout Wakanda, these warriors are exclusively female. Okaya, played by Gurira, heads the Dora Milaje in the film adaptation.

“The idea with ‘Black Panther’ was to have femininity and ferocity as this thing that was so completely covered and so totally normal,” Danai said to Vice. “It wasn’t something you had to choose, one or the other. It was the embodiment that all women can be, which was really on the page from the get-go.”

Aside from the Dora Milaje, “Black Panther” featured other significant female supporting characters, including Wakandan princess Shuri, who controls all the technology in the nation, the queen of Wakanda and Nakia, T’Challa’s friend and love interest.

“‘Black Panther’ did an amazing job of empowering women,” Nya Beckham ’19 said. “In the movie, we protected the black men, and no decisions were made until a black woman of power approved them. The fact that the army guarding the king and his family was solely black women was extremely revolutionary.”

Furthermore, the movie was groundbreaking in its casting of these female characters, Beckham said.

“Being able to see darkskin girls in a place of power in the movie was so important because colorism is a serious issue in the black community,” she said. “We tend to divide ourselves by skin tone and the lighter you are the ‘better’ you are, which is completely untrue. I think that it was time to put that argument to rest and show young black girls that no matter their skin tone, they are important, beautiful and powerful.”

Movies like “Black Panther” could demonstrate a positive shift for the future of mainstream cinema, students said.

“[‘Black Panther’] paves the way for other Afrocentric movies to find success in the film industry,” Flippen said. “Diversity is important in pop culture because that’s how many people learn about other cultures. Entertainment holds so much power over how we view the world. Everyone makes assumptions about things they’ve never experienced in the real world before based on what they see on TV and in movies. Having a movie like ‘Black Panther’ is so impactful because it portrays black people and Africa in a way that no other movie ever has.”

Studies have shown that representation in pop culture can have tangible effects on the way members of society, regardless of their own demographics, perceive different groups of people.
“We’re pretty confident that the more TV you watch, the more media you consume, the more likely it is that media, almost like radiation, builds up,” director of the Ralph J. Bunche Center for African American Studies Darnell Hunt said to HuffPost. “And the accumulated effect is to make you feel that what you’re seeing is somewhat normal.”

According to a poll of 360 Harvard-Westlake students, 82 percent said that what they see in pop culture affects them personally. In 2012, Professor at Indiana University Nicole Martins and Professor at University of Michigan Kristen Harrison co-authored a study on television’s effect on self-esteem. Using children as the subjects of their study, they found that white males reported higher self-esteem as they watched, while girls and boys of color felt worse about themselves.

“We’ve seen all these other Marvel movies that people are all talking about,” Flippen said. “There’s a sense of pride in coming to school and having your friends talk about a movie that’s about black people. All the time it’s always a white hero saving the day and having this change, and its good to see people appreciating a black movie for a change.”