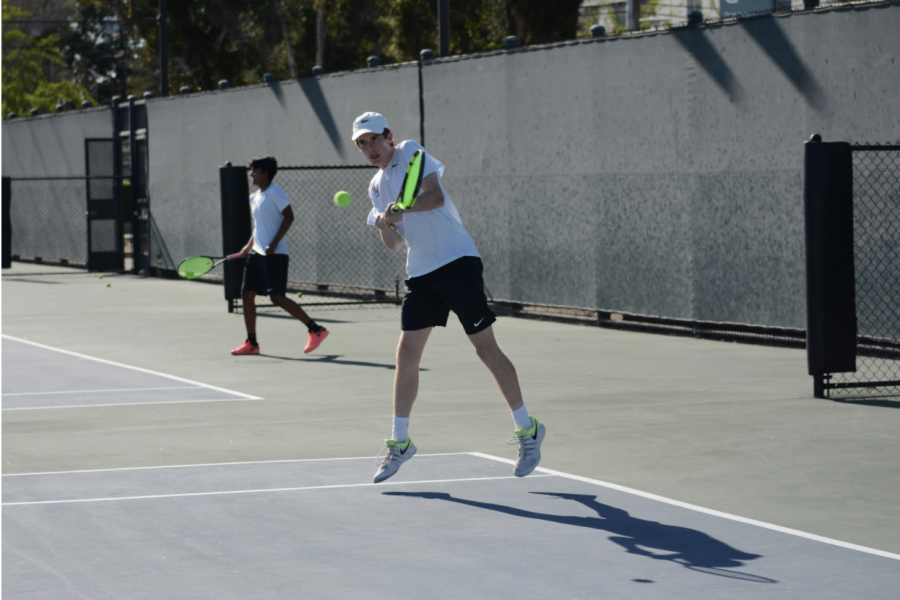 The Wolverines defeated the Knights in dominating fashion Tuesday night, winning by a score of 16-2. The win improves the squad’s overall record to 12-1 and its league record to 6-0, continuing the 195-game Mission League winning streak under head coach Chris Simpson.

Due to a lack of available players, members from the junior varsity squad were called-up to represent the Wolverines. Call-ups included Gavin O’Leary ’19, Ian Litchmann ’19 and Adrien Navarre ’21.

“It feels good to come up and play at the next level,” O’Leary said. “Even though it’s against one of the weaker teams in the league, it’s a lot of fun, you get really good competitive matches and the experience of what it’s like to be on the varsity team.”

O’Leary won his only match of the day 6-3, while Litchmann and Navarre picked up one win in three matches.

The match included some quick victories, notably a golden set by Corey Marley ’20 which was completed in under twenty minutes.

The two squads faced off earlier this season, seeing the Wolverines walk away with a 18-0 win.

St. Francis’ roster featured Ian Freer, who is ranked as a four-star and top-100 recruit by The Tennis Recruiting Network. The Wolverines were able to shut down Freer, winning every match against him. The closest match of the day saw David Arkow ’20 defeat Freer 7-1 in a tiebreak.

Arkow went on to drop only one game in his next two matches.

Doubles pairing Kenneth Lee ’19 and Pat Otero ’21 went 3-0 in matches, only dropping one game across all three matches. Another doubles pairing of Nico Guillien ’20 and Mike Thomas ’20 replicated their teammates’ success.

“I think it’s always important to have matches like these because they help remind us how good we really are and that we can all really be a part of something special and hopefully win a championship this year,” he said.

Otero, who is playing in his first season for the varsity team, expressed his enjoyment being on the squad thus far.

“It’s been a great experience for me,” he said. “Not only because I’m learning a lot of tennis tricks and skills from these older kids but also about different ways to live my life. A lot of kids sacrifice time for schoolwork and it’s interesting for me to see and evaluate my own choices for the past and the future so I can really make something of myself here in this Harvard-Westlake community.”