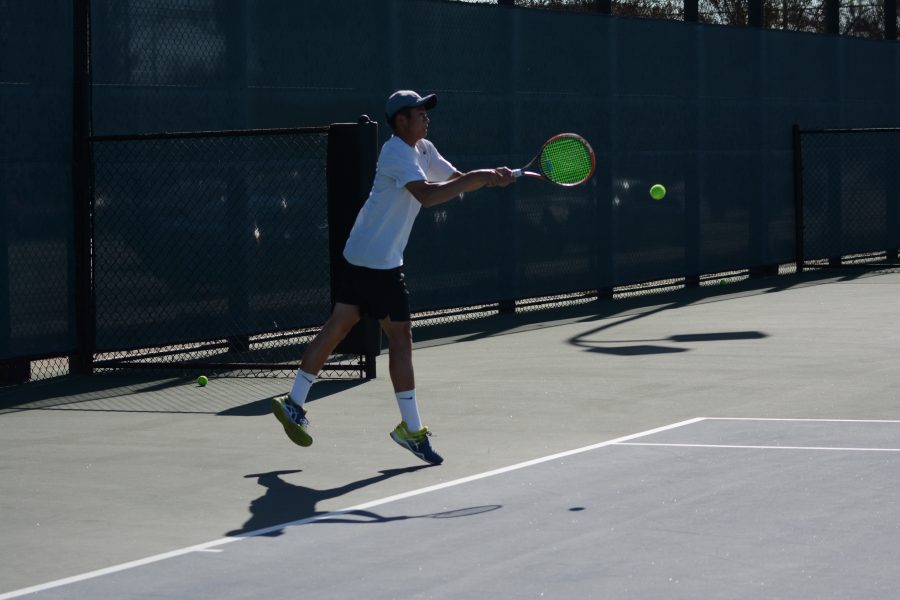 The former CIF-SS D1 Champions have been able to replicate their immense success from last season, going 14-1 in their first 15 matches and continuing the now 198-game Mission League winning streak under head coach Chris Simpson.

After the departure of six senior leaders from last season, the squad is youth heavy, featuring five sophomores and two freshmen.

Though he is still young, the team’s number one singles player is David Arkow ’20. Arkow is ranked as a four-star and top-100 recruit by The Tennis Recruiting Network.

On March 23, ten members of the varsity team departed campus to embark on their journey to the All-American tournament, which featured 16 of the best teams in the country. The Wolverines were ranked the No. 3 seed heading into the tournament.

The boys advanced to the semifinals, defeating rival UNI Irvine in the process. The match came down to the wire, seeing the Wolverines barely edging the Trojans in total games.

The boys’ tournament run came to a close, falling to Menlo in the finals. The Wolverines walked away from the tournament as the No. 2 ranked team in the country.

“It was a great experience,” Kenneth Lee ’19 said. “The team really bonded, and we didn’t think we would make it that far, so we were proud of our performance.”

Due to the Wolverines’ dominance and lack of competition in the Mission League, members of the junior varsity team are often given the opportunity to play up on the varsity team to gain experience.

“It feels good to come up and play at the next level,” Gavin O’Leary ’19 said. “Even though it’s against weaker teams in the league, it’s a lot of fun, you get really good competitive matches and [you get] the experience of what it’s like to be on the varsity team.”

The Wolverines have dominated the league for over 20 years, not dropping a single match in the process. The ascendancy of the league has been under Boys’ Tennis Program Head Chris Simpson.

While league matches have not posed a challenge to the Wolverines, Mike Thomas ’20 says players still find positive takeaways from league matches.

“I think it’s always important to have matches like these because they help remind us how good we really are and that we can all really be a part of something special and hopefully win a championship this year,” he said.

League match ups also allow younger members of the team to gain more experience. Pat Otero ’21, a first year member of the varsity squad, expressed his enjoyment being on the team thus far.

“It’s been a great experience for me, not only because I’m learning a lot of tennis tricks and skills from these older kids but also different ways to live my life,” Otero said.. A lot of kids sacrifice time for schoolwork, and it’s interesting for me to see and evaluate my own choices for the past and the future, so I can really make something of myself here in this Harvard-Westlake community.”

The Wolverines will travel to compete in the Ojai Tournament on Thursday.