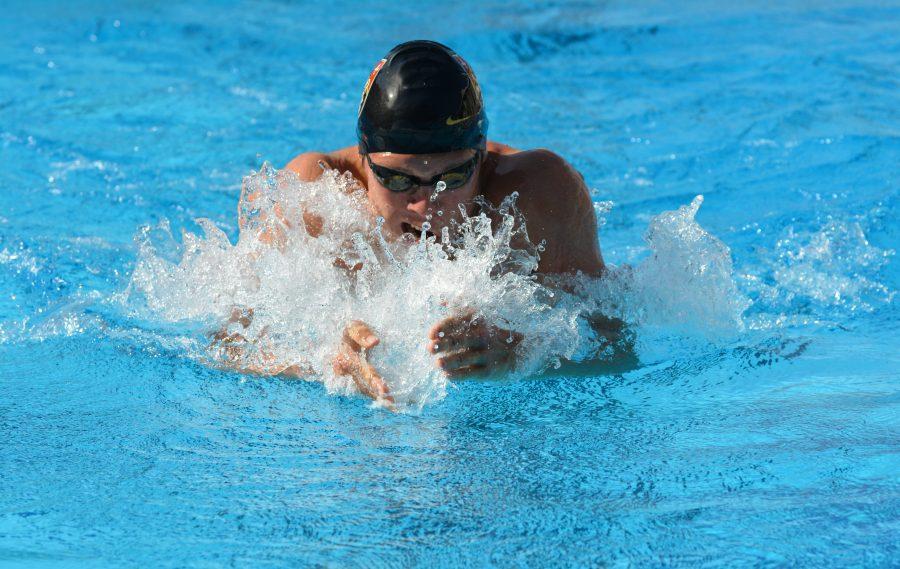 The boys’ and girls’ swim teams finished out the regular season with the girls’ team undefeated and the boys’ overall record standing at 6-1.

Both teams defeated Alemany on April 17 in the final league meet of the season.

The teams also defeated Saugus High School on April 13. The boys won with a score of 134-49 with the girls won 126-57 . The meet was also senior night for the boys, beginning with a ceremony in which the boys’ team’s four seniors were honored with flowers and pictures taken with their parents. There are no seniors on the girls’ team this season.

The boys’ team was dealt its only loss by Loyola on March 15. Loyola also defeated the boys’ team in last season’s league meet.

“As a team our biggest challenge is overcoming the Loyola barrier which has been a big issue for a while now,” Nick Zhang ’19 said.

Both teams are preparing for the upcoming Mission League Championship meet April 23 and 24, with select swimmers potentially moving on to CIF prelims, finals and state championship meets in May.

Last year, the girls’ team won the Mission League Championship, with the boys’ team coming in second place behind Loyola. Even so, both teams continue to focus on improving.

“We’ve already had some really fast swims this season,” Mila Fejzo ‘19 said. “I think the goal is to keep improving because we’ve already set the bar so high.”

In the absence of a large senior presence on the team, Jameson McMullen ’19, Adam Copses ’20, Eve Hookstratten ’20 and Fejzo have emerged as leaders and major point scorers. Team captain Paul Leclerc ’18 said they have been tantamount to the team’s success.

“The season is going great,” Leclerc said. “We have a pretty young team with a lot of sophomores. I wasn’t really sure coming into the season how it was going to pan out with the team being so young, but over the season everyone has developed pretty amazingly.”

In addition to its regular season successes, the boys’ team is also in the hunt for a top-10 finish at the CIF State Championship meet, where last year the squad ended in 12th place. The team plans to rely on their under-appreciated diving squad to help them accomplish this goal, as the points earned by the divers combine with the swimmers to produce a final score, and points from a strong diving team can make a difference in the outcome of a meet.

“We need to keep going to practice and maybe get a good taper in and rest up before CIF,” Marcus Leher ’18 said. “Something that’s not mentioned a lot is our diving, which is really important. Will Rains ‘19 is an absolute beast, and hopefully this year he’ll do really [well] for us and that will help propel us forward.”

While Rains, the school record holder in 1M diving, was injured last year during the CIF State meet, he is expected to be back for this year’s final meets.

Both teams will travel to CIF prelims May 10.