The Harvard-Westlake Chronicle • May 2, 2018 • https://hwchronicle.com/51789/sports-home-page/boys-volleyball-drops-match-to-alemany/ 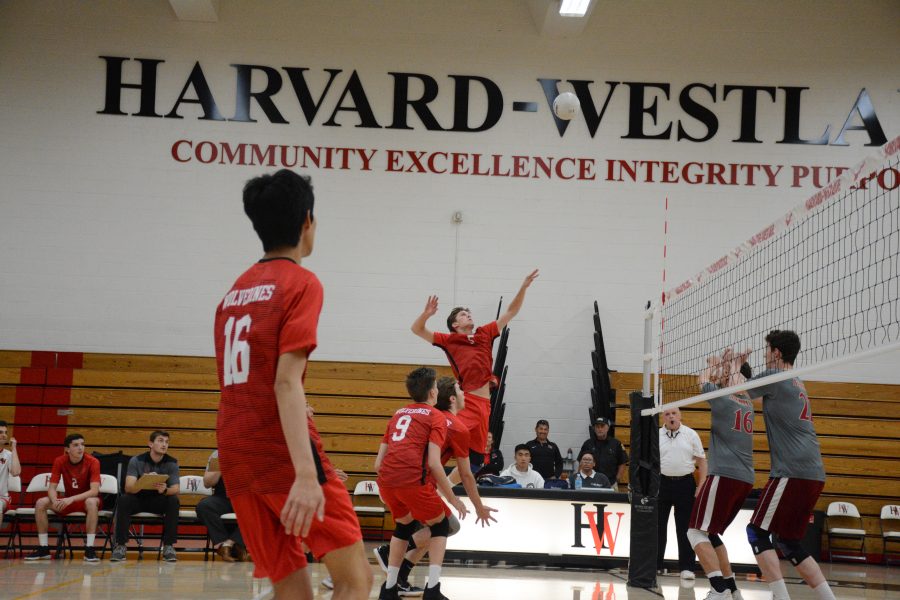 After a perfect set from Will Mallory '20, Justin Eitner '18 is in position to spike the ball. Credit: Jackie Greenberg/Chronicle

The boys’ volleyball team dropped a 3-0 match to Alemany at home Tuesday night on senior night. The Wolverines’ current records are 5-7 in league play and 6-10-1 overall.

“Even though we didn’t get the win we wanted and struggled with little errors here and there, I can’t say enough about these seniors,” setter and Chronicle staff writer Will Mallory ’20 said. “They bring an energy to the team that will never be duplicated, and all of us will miss them very much next year.”

“This wasn’t our best game but we still came together as a team to celebrate the departing seniors one last time,” middle hitter Griffin York ’19 said. “Our team is going to have to be a lot more efficient next year as we have very little depth. A lot of the guys are practicing passing or serving that wouldn’t normally be, because next year they will have to.”

The Wolverines will face Notre Dame on May 2 at home to determine if the team is eligible for playoffs.

“We still have one more match tomorrow to determine if we make playoffs or not, so hopefully we can pull it all together for one final push,” Mallory said.