Big Issues on the Small Screen: As TV shows are becoming more accessible than ever, they are also becoming more representative, inclusive and educational 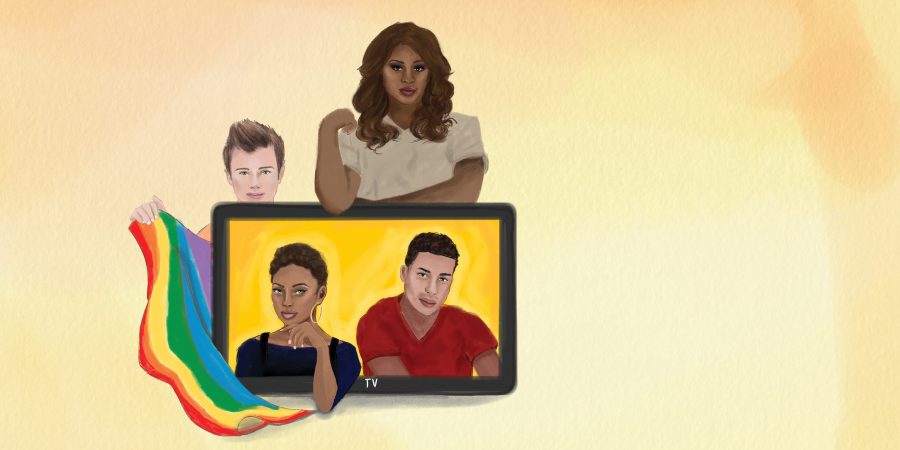 When Leyah Barris ’19 first told her friends that there would be a show about her and her family on ABC that her father Kenya created, she didn’t think they would refuse to watch it. They didn’t make excuses about being too busy with homework or being uninterested in the plotline; instead, they had a problem with the name: “Black-ish.”

When “Black-ish” first aired in 2014, many were turned off by the show because they felt the name carried racist connotations. A petition from change.org that same year argued that the show should change its name because protesters found it “racist, socially damaging and offensive based on its concept that non-stereotypical black people are less their race than others, that hip hop culture is [something that] all blacks are supposed to embrace and that culture and race are one in the same.”

Among those troubled by the name was Donald Trump, who would be elected president two years later.

“How is ABC Television allowed to have a show entitled ‘Black-ish’? Can you imagine the furor of a show, ‘Whiteish!’ Racism at highest level?” Trump tweeted in October 2014.

But after having discussions with her friends encouraging them to be open-minded about the show, Barris finally convinced them to give it a try.

“Maybe it took them a couple seasons, but a lot of people watched it and came back to me and said, ‘Wow, I’m so sorry I said I wasn’t going to watch it because of the name, because this is really important,’” Leyah Barris said. “Not only [was it] funny, but it was really important to them, and they’d watch it with their families.”

The sitcom follows Andre “Dre” Johnson, an affluent black man, in his attempt to reconnect his family with their ethnic roots while balancing the privileges that come with their socioeconomic status.

“Black-ish” was the eighth most popular show on ABC in Fall 2017 behind “Grey’s Anatomy” and “Modern Family” but beating out “Shark Tank” and “How to Get Away with Murder,” according to TVLine.

Other shows addressing issues of intolerance and inequality have become mainstream in the past decade. According to Forbes, “Glee” was the fourth highest revenue-earning TV show of 2012, and viewership for the fourth season of “Orange is the New Black” made it the most popular Netflix original of 2016, according to a study by Symphony Advanced Media. More recently, the Netflix original “Dear White People” became one of few shows to receive a 100 percent critics’ rating on Rotten Tomatoes after its first season in 2017.

Shows like these with more diverse cast members allow wider audiences to relate to the characters. For Leyah Barris, it’s particularly easy to see herself on the small screen: the character Junior on “Black-ish,” a studious teenager whose friends are predominantly white, is based off her. Like the children of the Johnson family, she said she is tasked with finding a place for herself in the world given her racial identity in addition to navigating the normal trials of growing up.

“That’s what being black-ish is—it’s just growing up in this world where you’re still black, you’re physically black, and someone looks at you and you’re black, but at the same time, you’re not growing up with the same struggles as your parents necessarily or in the same way or same environment,” she said. “It’s just learning to cope with this new world of being kind of in the middle.”

Representation became important to Taylor Redmond ’18 since watching “That’s So Raven” and “Proud Family” on the Disney Channel. Growing up with these shows, Redmond said she appreciates seeing different depictions of people of color on TV that don’t just stick to unrepresentative and oftentimes inaccurate cliches.

“I don’t necessarily think there’s one specific image when I think of being represented well,” Redmond said. “Obviously, people are more three-dimensional than a caricature type on some shows or something that’s just about the ghetto or violence and drugs. People have more dimensions than just stereotypes.”

Shows like “Black-ish” and “Dear White People” break down racial barriers not only by providing more representation, but also by discussing salient social issues in the storyline. Redmond praised “Dear White People” for its focus on individual character development by devoting each episode to a specific character’s backstory, a structure shared by “Orange is the New Black,” which creates more room for a wider range of topics to be addressed.

“Dear White People,” for example, shows a group of African-American students at a fictional Ivy League college who are faced with social injustice and racial discrimination.

“[TV shows] have really changed because in 1985 we didn’t have ‘Black-ish’ dealing with social commentary,” Director of Diversity, Equity and Inclusion Janine Jones (Taylor ’18, Avery ’23) said.

Jones remembers crowding around the TV set on Thursday nights with her family to watch “The Cosby Show,” which at the time was the only show that represented people of color in a wholesome and positive way, she said. But while the series shined in representation, it still lacked in deeper discussion about important racial issues.

The reason more recent shows have been more effective in accurately representing what America looks like today can be attributed to the growing diversity behind the scenes, Yvette Lee Bowser (Drew ’20), executive producer on “Dear White People” and consulting producer on “Black-ish,” said.

“We’re in a moment where more people of color are the voices and the production entities behind the work, which I think deepens the work,” Bowser said. “More and more often we’re sitting in rooms that are diversified that don’t exclude white voices or straight voices, but the rooms are much more inclusive, and I think that’s really reflective in the work in a beautiful way.”

Having been in the entertainment industry for 31 years, Bowser said she was previously used to being the only person of color or woman in the writing room to be consulted on issues that the majority of writers had no experience with.

“That’s not exactly inclusion when you’re the exception,” she said.

But with crews that are becoming more diverse and the polarizing nature of today’s political scene, the world is ripe for a show like “Dear White People.”

“The current political climate creates a certain urgency for a show like ‘Dear White People,’” Bowser said. “There’s more of an urgency for season two than there was even for season one, but I believe there’s always been an appetite for advancing the conversations that we need to have as Americans to make our society a better, more productive society. Obviously, with the advent of social media, we’re becoming more acutely aware of the daily atrocities committed against people of color, and I think that’s what makes the show feel and be even more relevant.”

“Orange is the New Black” also takes on issues of inclusion, addressing topics such as sexism, racism, transphobia and problems in the criminal justice system. The show traces the stories of a diverse array of characters in an all-women’s prison and sets itself apart because of the breadth of issues it tackles. Sophia Burset, a trans and black inmate on the show, is unjustly put in Maximum Security, where she is isolated and mistreated by security guards. Poussey Washington, another black inmate, winds up behind bars for possession of marijuana, a relatively minor offense when compared to those of the white characters on the show.

In each episode, the show attempts to elicit empathy from its viewers, showing inmates’ families and their complex relationships with each other. And there’s a large audience eager to learn about these women’s stories: “Orange is the New Black” reaches millions, largely due to its home on Netflix, which is available in over 190 countries. Streaming has become a popular way to tune into today’s most popular shows, with 61 percent of young adults aged 18-29 saying that online streaming services are the primary way they watch TV, according to Pew Research Center.

Not only do streaming platforms help shows to reach a global audience, but they also allow for more creative freedom, as the content does not have to be made more palatable for a broader audience like that of a network show, Bowser said.

“Dear White People” capitalizes on this freedom by utilizing satire to address issues like racism head on rather than trivializing the issue. But even before streaming platforms like Netflix and Hulu, programs like “Glee” made waves on network television. “Glee” promotes the idea of being yourself by bringing together high school kids of all different backgrounds and identities in an unexpected space: the Glee Club.

Jake Schroeder ’20, who watched the show before he entered high school and came out as gay, said he appreciated seeing gay characters who were so unapologetically themselves on screen. Although he said he hasn’t experienced homophobia in high school, he nonetheless felt the show sparked important conversations about acceptance.

“It’s a lot more stereotypical than high school,” he said. “By making it very stereotypical, they’re pushing the awareness of the problems that we face or we supposedly face in high schools today.”

Schroeder said he felt especially comfortable being queer in Harvard-Westlake’s increasingly accepting community, citing the introduction of all-gender bathrooms and the election of two prom kings at this year’s prom.

But representation of queer people in TV has not always been mainstream. Coordinator of Diversity, Equity and Inclusion and science teacher Nate Cardin said when he was growing up, few shows showed LGBTQ people in a positive light.

The only show that Cardin said he remembers watching as a teenager that included a queer character was “Dawson’s Creek,” so even now, as an adult, seeing more representation of people like himself is powerful.

The entertainment industry is dawning on a particularly exciting time because of all the recent change, Bowser said.

“We’re still at the beginning of it,” Bowser said. “And the good news is, I don’t see the end of it. There are infinite depictions of people of color that have yet to be showcased in the medium, and I think that’s important for people to recognize because there are so many versions of us that haven’t been seen.”

Although shows incorporating more social commentary help introduce young people to new ideas, Jones said this exposure to topics as complicated as race and diversity must be supplemented off-screen by engaging in conversations and reading on these issues with a critical eye.

“Kids have to know that everything that they watch on a TV show isn’t necessarily real, just like everything that they may read on the internet in an article or see on a television news channel, that might not be real or it may be skewed, so you have to do your own independent research,” Jones said. “To form really strong opinions based on things you’re seeing on television is not the smartest way to approach things.”