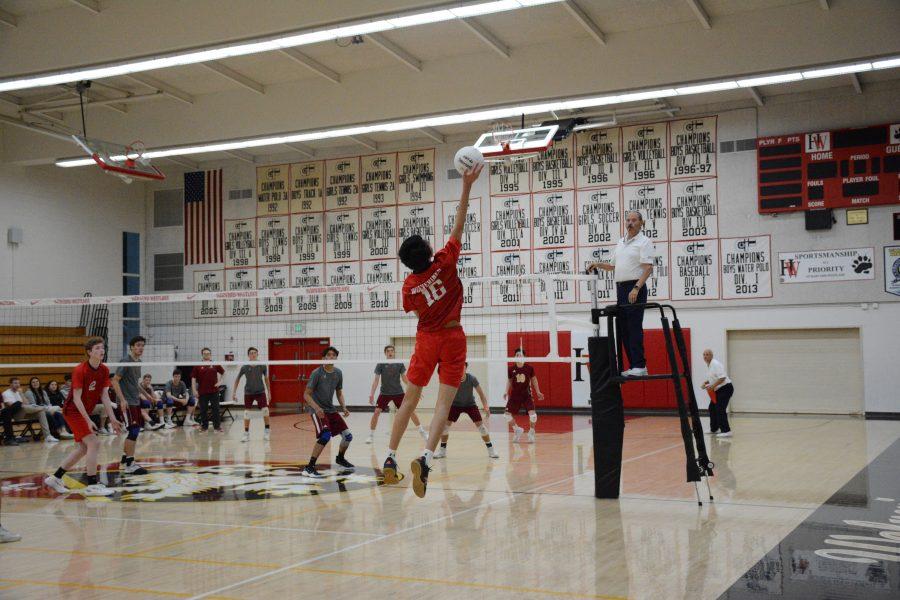 Anthony Navarro '18 and his teammates face off against Alemany on senior night May 1. Photo Credit: Jackie Greenburg/Chronicle

The boys’ volleyball team dropped a 3-1 CIF Wildcard match to Arcadia High School on May 5, stripping away the squad’s possibility to compete at playoffs that they earned after their 3-1 win over Notre Dame on May 2.

“Teamwork and talking on the floor helped us win some sets, but we need to bring more intensity throughout the whole game to help us win more matches,” outside hitter Jasper Richards ’20 said.

“It’s really hard to prepare for the loss of nine seniors whatsoever,” setter and Chronicle staff writer Will Mallory ’20 said. “With that being said, I think our team has the talent and potential to step into the roles that we’re losing next year but it’s definitely going to be hard to adjust. I can’t say enough about these seniors, they have been really helpful this year and have played really well. It’s hard when you have a leadership vacancy like that. They bring an energy to the team that will never be duplicated, and all of us will miss them very much next year.”

The team has to prepare for the loss of players and adapt to underclassmen that may not be as ‘varsity- ready’ as the veterans.

“We’re having some players begin to get experience playing new positions that won’t be filled next year,” middle hitter Griffin York ’19 said. “This means our team is going to have to be a lot more efficient next year as we have very little depth.”

Major weaknesses the team faced this season was a lack of communication and commitment. Although players worked to improve team dynamics, the effort put in was not sufficient. Many players had little motivation toward the end of the season, sprouting from their complacency.

“One thing the team needs to do more is communicate – on and off the court,” York said. “We also need to adapt to our opponent’s disadvantages and use them to our advantage during the game.