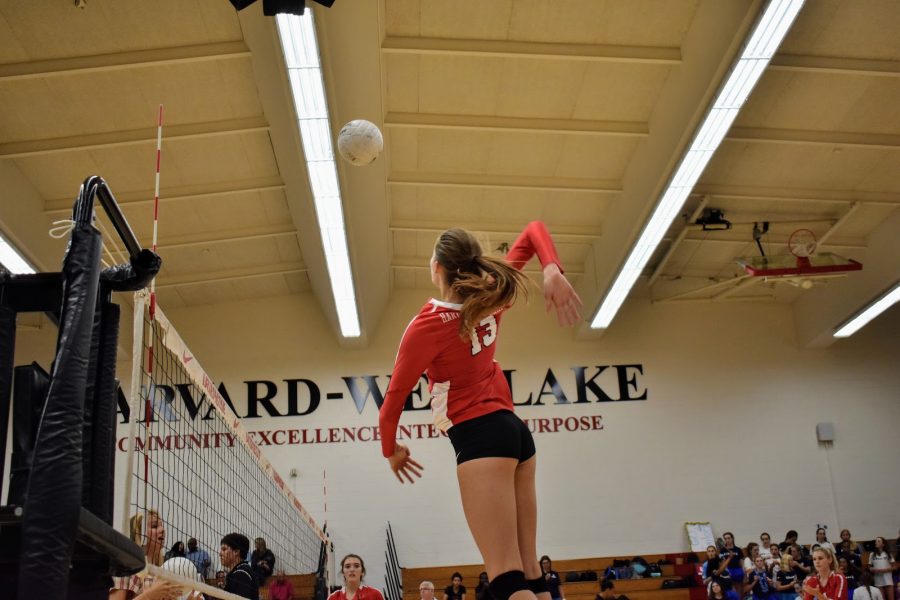 PICK IT UP AND SLAM IT DOWN: Britt Gronemeyer ’20 rises up for a spike in Girls Volleyballs 3-0 loss against Marymount High School on Sept. 7 in Taper Gym. The team returns to play Oct. 4 at home against league rival Notre Dame High School. (Photo credit: Astor Wu/Chronicle)

Leading 12-8 in the fifth set, the girls’ volleyball team was three points away from solidifying a victory Sept. 18 against Notre Dame High School. After nearly three hours of back-and-forth play, the Wolverines hoped for one last serving run to defeat their cross-town rival and cement a 2-1 league record.

However, the Knights were not going down without a fight. They proceeded to go on a 9-3 run to defeat the Wolverines and defend their home court. Mobs of navy and gold stormed the court, leaving the Wolverines stunned and exhausted, looking helplessly through the net as the Knights celebrated their 17-15 victory with their teammates and fans.

Two weeks later, the Wolverines said they have only one thing on their mind: revenge.

“We definitely didn’t play to our full potential, and it served as a reality check for us,” opposite Bella Treadwell ’20 said. “We need to clean up our side of the ball so we can show them our true capabilities and beat them at home.”

Despite the loss, the Wolverines impressed in the first half of the season, posting an overall 21-7 record along with a 3-2 league record. Led by Girls’ Volleyball Program Head Hayley Blanchard, the squad also placed well in the Lakewood and Durango Tournaments, re-establishing its dominance outside of league competition and extending its success in tournament play.

In the first round of league matches, the Wolverines defeated Flintridge Sacred Heart High School 3-0 on Sept. 4 but fell 3-0 to Marymount High School three days later. Outside hitter Britt Gronemeyer ’20 said the loss was tough but she was confident she and her teammates would rebound.

“Obviously losing to Marymount isn’t what we wanted,” Gronemeyer said. “We definitely played competitively, and there are a lot of good things we can take from this game and apply to practices and future matches.”

The squad then fell to Notre Dame but bounced back with a 3-0 win against Marlborough on Sept. 20, completing the first half of league play. The Wolverines defeated the Mustangs once again just a week later with an overall score of 3-1.

Defensive specialist Eve Baxter ’19 said that she thinks the squad got distracted by their opponents’ style of play in both league losses.

“One of the most important things for our success this season is treating every team that we play the same,” Baxter said. “If we focus on our side and our game, we can handle any team we play.”

This summer, the squad traveled to Hawaii for a week to establish team bonds and develop early chemistry both on and off the court. Throughout the year, the team has spent a lot of time together both in and out of school and their connections have translated well on the court this season.

“While a few losses have definitely stung, the girls have bounced back stronger,” Blanchard said. “We have a number of girls who have stepped into new roles and positions and have improved a ton over the course of the season.”

Most notably, opposite Eva Lekovic ’21 has blended well into the Wolverine offense and established her presence on the right side. Lekovic, returning from the 30-day sitout period required from all transfers, recorded nearly 40 kills during the Durango Tournament in Las Vegas from Sept. 14-15. The sophomore hitter said she was nervous to play at first but ultimately found comfort in her teammate’s encouragement.

“The whole experience was very nerve-wracking at first,” Lekovic said. “The whole team was super supportive, which made it a lot easier.”

As the season progresses, the Wolverines will continue to refine their skills in hopes of making another playoff push. Blanchard said she has seen a lot of potential from her players but acknowledges that there is still a lot of work to be done.

The squad looks to even the series with Notre Dame at 6 P.M. on Oct. 4 in Taper Gymnasium and will finish their league play on Oct. 9 at Flintridge Sacred Heart HS.