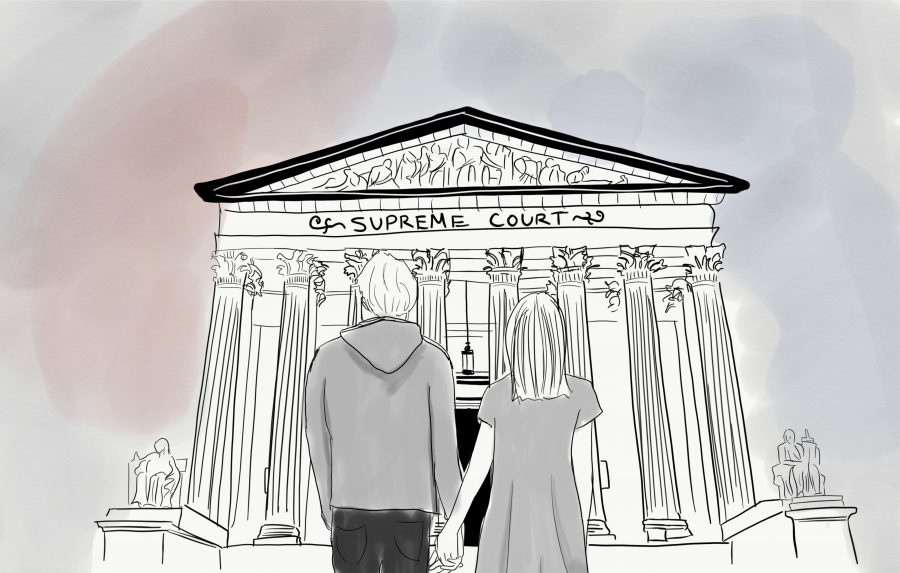 Chronicle Editor-in-Chief Sophie Haber ’19 and Digital Managing Editor Lucas Gelfond ’19 weigh in on the impact of Supreme Court Justice Brett Kavanaugh’s confirmation Oct. 6 for their generation and the significance of gender roles.

I’m Sophie Haber. I am lucky.

Everyday, I walk through the campus gates amongst a diverse student body that respects each other for our individual passions and accomplishments. Despite the common mantra “boys will be boys,” I expect that the classmates sitting next to me will not make a “mistake” that could alter my life or the life of my friends. I go to a school where the students hold each other accountable. My teachers provide a space where I can form opinions and voice them. My parents show me what it feels like to be respected. I’m reserved by nature, but as a high school student, I’ve had the opportunity to emerge as a leader. Yet still, I hesitate before I assert myself for fear of being viewed as too strong, too emotional or impolite. I am a quiet 17 year old girl, and I know that respecting me is not compulsory for most.

I have grown up in a world where women’s voices are often dismissed. Since the #MeToo movement began last year, I did not think I would grow old in it.

But, when Brett Kavanaugh was confirmed to the Supreme Court today, I realized how wrong I was.

Today’s world remains one where women cannot speak up against injustices with the confidence that they will be taken seriously.

Already, only five to 20 percent of all sexual assaults are reported, according the the Wall Street Journal. Under-reporting instances of sexual assault is a major problem today, as women fear their allegations will be regarded as purposefully fictitious. Today’s decision will exacerbate this problem. I want to feel like I would be able to report any future instances of misconduct without guilt. I want my friends to feel like they would be able to step forward without fear of persecution. Most importantly, I want stories like Christine Blasey Ford’s to live solely in the past. Girls should not anticipate experiencing instances of sexual misconduct in the first place.

I fear that the outcome of today’s confirmation will send a message to my classmates and other people my age across the country that they will not be held accountable in the future for their actions today. At school, my peers and I are expected to act responsibly and with a strong moral guide. Such expectations should stand for every action we take, no matter where we are. We may be 17 year old high school students, but we understand the difference between right and wrong, and the concept that there should be consequences for our actions. Today’s confirmation sends a different message.

The Supreme Court is one of the most important institutions in the country. Its justices should be held to the highest of high standards. The fact that Kavanaugh was approved for the position despite multiple accuser testimonies sets a terrible precedent for people my age. This should not have been a partisan issue. This is an issue of the culture toward women in our country for generations to come.

I’m Sophie Haber. I’m a high school girl who treats others with respect. I want my Supreme Court justices to do the same.

I’m Lucas Gelfond. I’m a white male in a major city who attends a top private high school. I’ve never worried where my food is going to come from. Aside from one memorable incident, I’ve never been discriminated against for being Jewish, and I couldn’t imagine being discriminated against for being white. As a male, I’ve never worried that my gender has negatively affected how people view my work or ambitions. I come from immense privilege and I know that. That’s also why I’m a feminist and why Brett Kavanaugh’s confirmation has also been my nightmare.

As such, reasonable doubt of Kavanaugh’s guilt seems like an irrelevant standard. We instead should ensure that, beyond a reasonable doubt, Kavanaugh has the temperament and good morals that a Supreme Court justice should. Credible accusations from brave women like Christine Blasey Ford, as well as his own testimony, should have been more than enough to show that he does not.

In light of this standard, the limited nature of  the FBI’s investigation was even more infuriating. Both the lawyers of Blasey and another accuser, Deborah Ramirez, noted that the FBI “failed to follow obvious leads,” according to the New York Times. In light of credible and damning testimony from both Ford and Ramirez, it seemed blatantly disrespectful to not pursue a serious and in-depth investigation about the allegations. In their failure to do so, the FBI seemed to communicate a strong message: Kavanaugh’s denial outweighed the accusations of many women. This was only corroborated by President Trump’s mocking of Ford’s testimony. As a friend of several women who have been sexually assaulted and harassed, this was an outrage. The confirmation served only to make coming forward about sexual assault more difficult for victims.

“We’re Still Living in the Boys’ Culture of Kavanaugh’s Youth,” New Republic writer Roge Karma titled an article he published today. It certainly feels that way. Any concept that “boys will be boys” is deeply offensive to me. The idea that any bit of my gender could make assault acceptable is revolting. The idea that this is inherent to my hormones or nature is shameful. The boys I know are not like this. I would hope no boys are.

Yet, Kavanaugh’s confirmation similarly delivered a vile message to young boys: privilege trumps all. For instance, Senate Majority Leader Mitch McConnell could justify confirming Kavanaugh without a new legislature from nearby midterm elections while refusing to hold hearings for former President Obama’s nominee, judge Merrick Garland, in 2016 on the same grounds.

Kavanaugh’s hearing insinuates something terrible: our privilege will always lend more credibility to the things we say, insulating us from accountability. In spite of credible assault allegations, we can succeed, as long as we continue to deny and rely on reasonable doubt.

I’m Lucas Gelfond and I come from immense privilege. That doesn’t mean I would ever want something like this.

We are a boy and a girl in high school. Justice Kavanaugh is 53 years old, and his lifetime appointment on the court means this confirmation will likely leave a legacy that lasts well into our adult years. Hopefully, the views of sexual assault displayed by some during his confirmation will not.