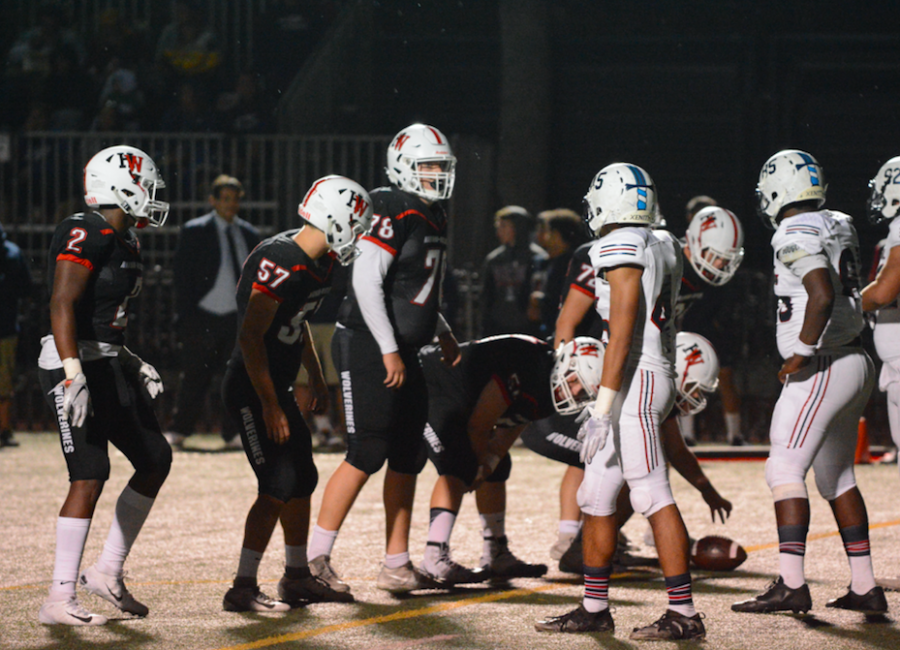 Senior offensive linemen Garnett March '19, Evan LaTourrette-Ghez '19 and Kyle Hearlihy '19 getting ready for the play as rain begins to fall on their senior night.

Football’s senior night game against St. Paul was rescheduled for tomorrow at 2:00 p.m. due to thunderstorms. The Wolverines played one quarter until being called off the field around 7:30 p.m.

They waited about an hour and a half before deciding to continue the game tomorrow. Although it was was senior night, the seniors still waited eagerly during the lightning break in hopes of returning to the field and are now focused on tomorrow.

“It is what it is,” linebacker Will Goldberg ’19 said. “It is not ideal, but at the end of the day, St. Paul has to deal with the same adversity that we do, so we have to push through it and finish strong.”

During the quarter they played, the Wolverines were unable to score and the St. Paul Swordsmen scored two touchdowns, making the score 13-0 at the end of the quarter. Goldberg had an interception leading to a touchdown run by running back Sultan Daniels ’19 which was called back on a penalty, but showcased the seniors during their quarter long senior night. Other than a few promising plays, the Wolverines were unable to convert on a first and goal and were weak defending the running offense of the Swordsmen.

“After seeing their offense today we know they want to run the ball,” Daniels said. “On defense we need to make sure all the gaps are covered and really bottle up their running backs.

Upon hearing the news of the game continuing tomorrow, quarterback Jameson Wang ’20 said he is ready to come back stronger.

“We are fortunate to have the opportunity to redeem ourselves tomorrow,” Wang said. “We can watch the film to see what we need to fix and go from there. We have to come out with more intensity and urgency to win this game. This is really important for all of us because this is for the league championship, hopefully we will turn this game around in the three quarters we have left.”

The game will resume tomorrow at 2:00 p.m. at Harvard-Westlake.