U.S. Belong With Me 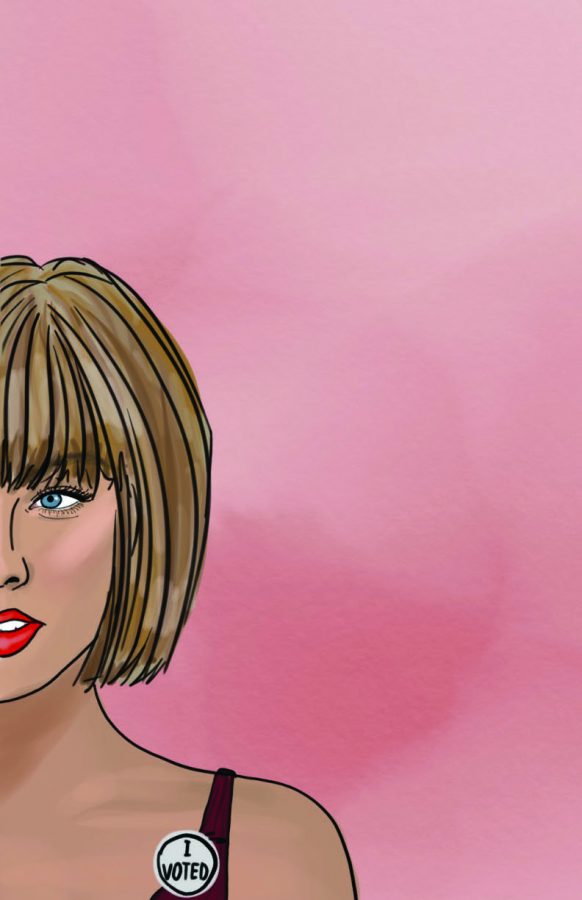 After scrolling past what she expected to be just another photo on Taylor Swift’s Instagram, Rebecca Frischling ’19, co-president of La Femme, was struck by a caption commenting on the then-upcoming midterm elections. Once the initial shock of reading a politicized statement made by someone who was previously apprehensive to talk about politics passed, Frischling said she remembers the distinct sense of empowerment she felt after reading the post.

“I really loved how [Swift] spoke out,” Frischling said. “I just felt very proud because she was using her voice for an extremely important purpose, getting people to vote, and I really appreciated that.”

According to the Pew Research Center, political parties are more divided along ideological lines as of 2014 than at any point in the past two decades.
While celebrities have long been known to play an important role in American politics, celebrities have more recently had increased reach due to social media, according to research conducted by the University of Rochester. Founder of Our First Vote Andrea Yagher ’20, who organizes on-campus voter registration drives, said she feels that politicized statements from celebrities are important to help citizens become more aware of the world around them.

“I think it’s vital in our society that people from all ends are connected to the backbone of what our country is about and the importance of voting for everyone,” Yagher said.

Christian von Sikorski, a senior researcher at the University of Vienna who focuses on political psychology, political communication and the media’s effects on politics said that the impact celebrity endorsements have varied impacts based on a variety of factors.

“As always, it depends,” von Sikorski said. “However, celebrities and their endorsements can have a relevant impact when persons actually identify with a certain celebrity. Specific target groups, like younger individuals who do not regularly use mainstream media like television and newspapers and receive an endorsement directly from a celebrity they follow on social media can be especially affected.”

The impact of such endorsements is usually short-term unless the celebrity repeatedly posts about the respective endorsement and has a big reach, von Sikorski said.

“Under certain conditions, such endorsements can actually have an impact,” Von Sikorski said. “A good recent example is the case of [Swift] and her post on Instagram, for which data shows the post actually had an impact on U.S. voter registrations. Endorsements can be particularly influential in mobilizing individuals with congruent prior attitudes and positive prior attitudes toward a celebrity to vote.”

In the politically-charged post that Swift shared to her 112 million Instagram followers in October, she declared her support for Tennessee Democratic candidates Phil Bredesen for Senate and Jim Cooper for the House of Representatives and encouraged her followers to register to vote. According to TIME Magazine, about 105,000 people registered to vote in the hours after Swift released her statement. According to vote.org, September saw a total of 190,178 new voters who registered. On the other hand, von Sikorski said that endorsements can also have negative effects.

“Endorsements can also hurt a politician when it comes from a scandalous celebrity, like if a person is racist and then publicly announces support for a candidate.” von Sikorski said.

Furthermore, since many people already have pre-existing opinions on celebrities and policians, if a celebrity someone dislikes endorses a politican it can actually lead to that person having more incentive to vote for the alternative candidate, von Sikorski said.

Regardless of whether an endorsement helps or harms a politician or political group, some students believe musicians should not discuss their political beliefs. In a Chronicle poll, 75 percent of 330 respondents said they feel as if it is a positive thing when musicians speak up on politics, while 25 percent said they think it is not a musicians place to speak about something they don’t necessarily know a lot about.

George Grube ’20 said he falls into the latter category. Grube thinks musicians should not use their platforms to try and teach people about politics or any particular policy, he said.

“Although in anyone’s right, I think the power to sway what people believe and just talk about politics, in general, is often irresponsibly used by musicians,” Grube said. “People may not necessarily think as critically about a celebrity opinion when compared to that of an academic, reporter, or more reasoned debate.”

Grube said that the greatest danger in paying attention only to musicians or any celebrity figure about politics is that it could lead to people believing things as a result of being misinformed.

“Even if someone has the ‘right’ opinion, if that opinion is not reasoned or justified correctly and truly, then it doesn’t matter whether or not it’s considered ‘right’,” Grube said. “Talking about these important topics in a well-informed way is a great responsibility that is rarely if ever exercised.”

Other students, like Zach Lechter ’19, feel that regardless of what a musician believes, they have the liberty to speak out.

Yagher said that while ill-advised statements could be harmful, musicians should use their wide-reaching influence to encourage participation in upcoming elections.

“I think that people should not force their beliefs on others, but encourage them to participate in democracy in any way possible, so others can vote for what they themselves want, not necessarily what the celebrity wants,” Yagher said.