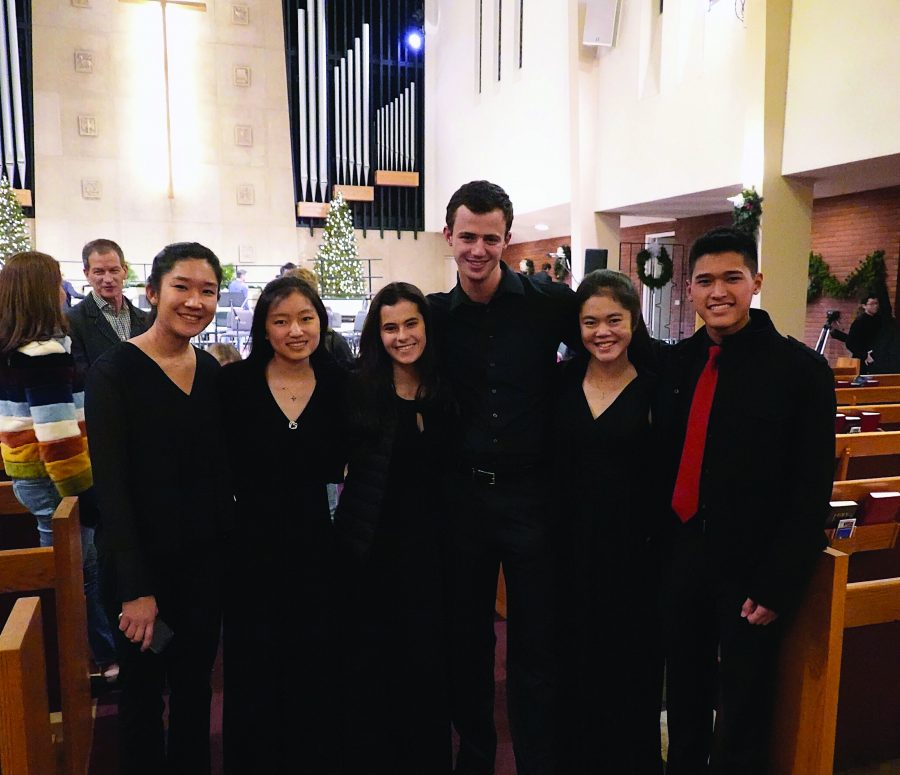 Upper school students in orchestra and choir performed in The Fall Instrumental and Choral concert, their first joint concert of the year. Students ranging from 10th to 12th grade were featured in the concert at Emmanuel Lutheran Church on Nov. 30 and Dec. 1.
Preparation for the concert started at the beginning of the school year in August. Performing arts teacher Mark Hilt said the process of preparing for a concert is about mastering musical techniques and practicing the music often.
“I see the whole piece and hear it in my head and then see on the page what might present difficulties,” Hilt said. “Then, we just take it apart and put it back together. We do a lot of repetition and break out into small groups.”
Additionally, the string section had a specific coach that came to help them perfect and master the music, Hilt said.
“[The coach] will work with them on individual passages that might be tricky or just technical stuff, and then we’ll put it back together and keep stopping and starting and refining and honing,” Hilt said. “It’s sort of like writing a paper. You don’t just sort of sit down and write the paper; you have a vision of where you want the paper to be and you start filling in the bits and pieces.”
Both choir and orchestra performed, which is different from past concerts. In the past, the choir has been featured in orchestra concerts, but this was the first of its nature. Choral director Zanaida Robles and Hilt chose the combined concert because they wanted to have pieces that included both the choir and the orchestra, they said.
“We wanted to do combined work with the orchestra and the chorus, and this presented itself as a sort of discrete manageable thing to do,” Hilt said.
Friday’s concert included Instrumental Ensembles and closed with the choruses and symphonies performing a piece together.
While Saturday’s concert was in the same venue, it featured choral ensembles in the first half and closed with the same ending piece, a 40 minute “Magnificat” by John Rutter.
Upper School student, Ben Beckman ’19 and middle school accompanist Christopher Wong each composed pieces that the Chamber Singers performed during the concert.
Hilt said the concert included five pieces from wind ensemble and one joint piece with Camerata Strings. Camerata Strings and Symphony each played two pieces.
“It’s a nice wide variety of a little bit of everything,” Hilt said. “We [played] Bernstein, Dvorak, Chabrier and some Bach in there.”
Symphony member, Jasmine Li ’21 said she believed everyone involved did a really good job.
“We played really well during the concert,” Li says. “Everything that we struggled with before musically seemed to come together when we played our pieces. It was overall a really fun experience and I really enjoyed playing.”
Hilt said that students accomplishing something that they have been working hard on is both a satisfying and beautiful feeling.
“I’m always excited to see the joy and the satisfaction that the students feel when they’ve completed a good thing like this,” Hilt said. “That sense of when you really accomplish something and it’s not just satisfying but it is beautiful as well makes me happy.”