Experience and depth result in an undefeated season 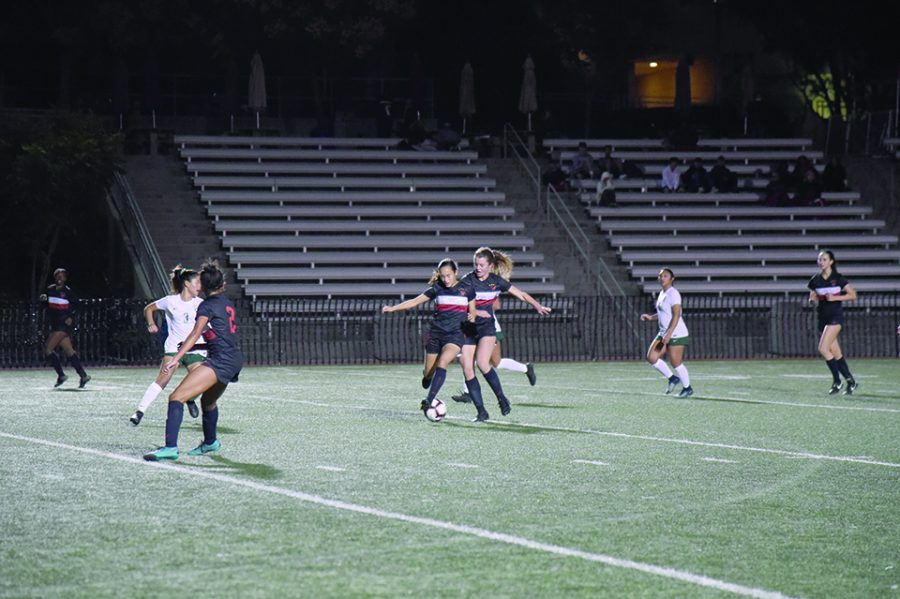 The Wolverines have yet to lose a game so far this season and clinched the Mission League title on Friday after beating Flintridge Sacred Heart High School. They have also outscored all of their opponents by a margin of 25 goals as of press date.The team is experienced; it has 12 seniors and a few strong underclassmen. So far, the squad is 5-0-1 in league play and is first in Mission League.

“It feels so good to have clinched the league title, and we are all so proud to be part of such an amazing team,” defender Sasha Vogel ’21 said. “I am so grateful for the camaraderie we have.”

The Wolverines capped off non-league play with an impressive showing at the National Elite Prep Showcase in Fort Worth, Texas, holding their own against the nation’s best. They went 2-0-2, with wins against Texas schools, Vandergrift High School and Boerne-Champion High School. While it wasn’t counted as a win, the team’s most recognized feat of the tournament was arguably their 1-1 draw against Southlake Carroll High School, who is the number one team in Texas according to coach Simms,

“We have a group that is truly a collective: great leaders, hard workers that press the opponent from start to finish, and players that train hard every day and truly compete,” Simms said. “The commitment and attitude of the group is phenomenal.”

The Wolverines had a solid season last year, finishing 14-5-3. While holding the best overall record and the largest goal differential in league, the team fell a game shy of first place.

“Last year was the first year in many that we didn’t win the title, so that is definitely something encouraging us to continue to do well,” Barnouw said.

The team’s depth and consistency has been key to its winning record this season.

“We have a pretty deep roster this year, so we are more comfortable,” forward Katherine Hollis ’19 said.

Even though they have clinched the Mission League title, the Wolverines still feel that they can improve, especially when it comes to converting on the front-end, Hollis said.

“I think one of our biggest challenges has been finishing in the final third portion of the game and capitalizing on our opportunities,” Hollis said.

With the season coming to an end, the team looks to win out in Mission League and make a playoff push.

“If we can finish the season strong, I think we will be set up for a strong showing in the playoffs,” Simms said. “We can compete with anybody and would love to win the first Division 1 CIF championship in program history. We have the team to do it.”

The Wolverines are using their disappointing end to last season as fuel for this year, as well as their current momentum of winning league, to hopefully set new heights for the program.

“We have a very determined attitude to finish the season off strong,” Barnouw said. “We want to go further in the playoffs than we did last year.”