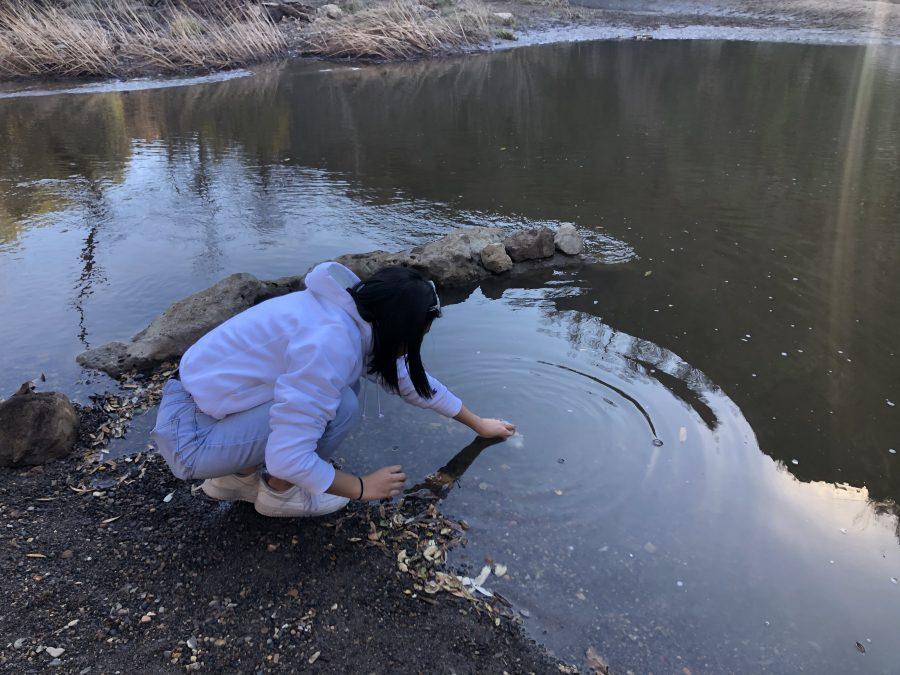 During a class field trip, an AP Environmental Science student measures the pH of the water from a stream in Malibu Creek state park. The excursion allowed students to test different water samples, which they will compare for a lab write-up. Printed with permission of Nadine Eisenkolb.

Students conducted several tests on the creek water, including a pH value test, a total solids dissolved test and a turbidity test.

“We went to several parts of the creek to gather different water samples, so that we could compare and contrast different levels of pollution within the water sources and whether it was safe to drink or not,” AP Environmental Science student Sam Yeh ’20 said.

Guy Hartstein ’20 said that water’s potability is dependent on the level of nitrate within it, and too much nitrate could be fatal.

In the past, students have conducted tests and observations at other sites, including a trip to the local White Point Tidepools in Malibu.

“I thought this trip, although less hands-on than our trip to the tidepools, was still a really good experience for us because we got to go out here to collect live samples in nature, something actual scientists would also do for research,” Hartstein said.

The trip to Malibu Creek State Park was delayed due to the heavy rains during the week prior.

Other obstacles, such as a mudslide that occurred while the students were on the trip, affected the accuracy of the water tests.

As a result, students drew water from only two to three sites, instead of the originally planned three to four as was intended for the experiment. Students in the class said they plan to use the water samples and the data collected from the excursion to complete a lab analysis.

The lab will analyze differences in water quality, and is the culmination of their current unit, Human Resources and Ecology.