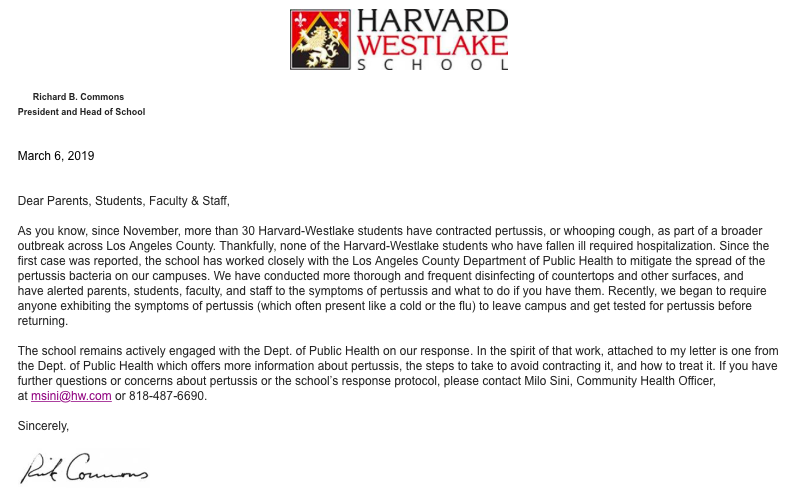 If the whooping cough outbreak at school grows from the 30 cases reported between Nov. 16 and Feb. 26, the next step may be to limit interschool activities, according to the Los Angeles County Health Department Office of Communications and Public Affairs.

Eighteen students at Harvard-Westlake have medical exemption from vaccinations, but none of them are among the 30 students who contracted whooping cough, Head of Communications Ari Engelberg ’89 said.

“My understanding is that starting in 2016 the law only allows students to be exempted from the pertussis vaccine requirement for medical reasons that must be documented by a doctor,” Engelberg said. “There is no more religious or ‘personal beliefs’ exemption.”

According to the LA County Health Department Office of Communications and Public Affairs, school closure due to the whooping cough outbreak is not probable, and there is not a specific number of cases at which the Health Department would tell the school to close.

President Rick Commons said that the administration has not contemplated closing the school; however, if they felt that the health and safety of the community was ever at stake, they would make that decision.

The outbreak is not unique to Harvard-Westlake, the Office of Communications said.

As of Feb. 19, there were three reported clusters of pertussis among 11 to 18-year-olds in Los Angeles County since the end of 2018. There were no prior clusters in 2018, and only two clusters throughout 2017, showing in increase in the disease in the area.

To curtail the outbreak at Harvard-Westlake, the Health Department told the school to mandate that everyone who presents cold-or flu-like symptoms at school, or who stays home sick from school, gets tested for whooping cough. Students are not allowed to return to school without proof of a negative pertussis test or completed treatment.

In a Chronicle poll of 318 students, 20 percent said that the whooping cough policy has deterred them from staying home from school.

When Rebecca Sugerman ’19 stayed home sick due to a sinus infection, her parents received an email saying she would not be allowed back at school until she had proof that she did not have pertussis.

“I had to miss the next day of school, which made me wish I hadn’t stayed home in the first place,” Sugerman said.

The pertussis vaccine wears out after 10 years and is only successful in protecting against whooping cough 90 percent of the time, according to the County Health Department. People who are vaccinated but still contract pertussis have milder symptoms.

Head of Upper School Laura Ross said that since whooping cough is not presenting as dramatically as it does in younger kids, she has noticed that doctors and families are surprised when students are diagnosed. She said she recognizes how hard it can be for students to miss so much school under those circumstances.

“I just told the faculty ‘I just need you to be super compassionate and super proactive if people are sick,” Ross said. “Encourage people to go home, be flexible with things and would just tell students to err on the side of caution and just stay home.”

Keith*, who was diagnosed with pertussis in December, said he came to school for two weeks with symptoms, under the assumption that he just had a bad cough. After a week of mild symptoms, he said he started having coughing fits during which he had trouble breathing, sometimes causing him to vomit. He went to his doctor and tested positive for whooping cough, which he said prompted a call from the Health Department, who notified the school.

Now, months later and back at school, he said he still coughs because the illness damaged his lungs.

“If you’ve been coughing, go get the test,” Keith said. “It’s good just to be safe.”

*Names have been changed to protect anonymity