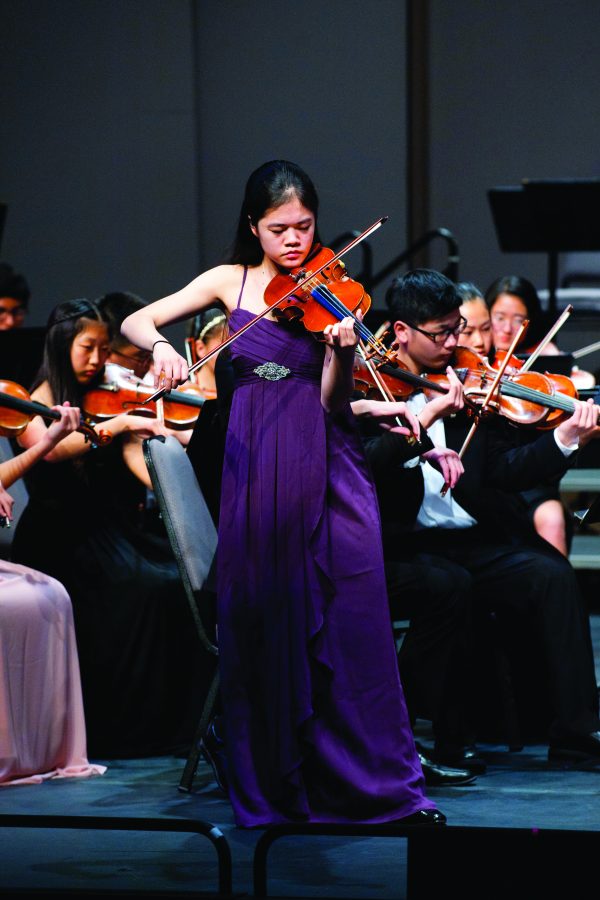 They moved in unison on the stage. Bows sliding side to side, the violinists played their instruments as one fluid mass. Seated in the audience with her family, a nine-year-old Megan Chang ’19 sat transfixed.

As it ebbed and flowed, the music surrounded Chang. She was mesmerized by the violin sections as the musicians swayed together. When the Los Angeles Philharmonic Toyota Symphonies for Youth’s performance of Prokofiev’s Peter and the Wolf ended, Chang knew she wanted to be like the performers gracing that stage.

“I think my favorite part of playing music is being able to share my love with others,” Chang said. “Music is just such a universal language that can touch the hearts of everyone and anyone.”

In addition to cultivating her skills in her schools’ music ensembles, Chang has attended programs outside of her community to further her interest in the violin. This past summer, Chang played at the Boston University Tanglewood Institute in Lenox, Massachusetts and performed in its Young Artists Orchestra. She was selected as concertmaster for the first concert of the summer, an honor Chang said allowed her to develop her leadership and communication skills.

“[It was] honestly the best experience of my life,” Chang said. “Words cannot express how magical that summer was.”

Chang said that through out-of-school programs such as Tanglewood and more local opportunities, she has been able to meet other musicians. For the last two years, Chang has also been a member of the American Youth Symphony, a prestigious, pre-professional orchestra of mostly college and graduate students. Since she is one of the only high school members of the orchestra, Chang said she is motivated and inspired by her collegiate-level and professional peers.

Chang also continues to make the two-hour commute to Palos Verdes to play with the Palos Verdes Regional Symphony Orchestra (PVRSO), a community that she said has supported her since she first began playing. “PVRSO has become almost my second home, like another family that I can always rely on for love, encouragement and joy through all the ups and downs of life,” Chang said.

Nearly a decade after first falling in love with the violin, Chang took the stage of the 2018 California Chapter of the American String Teachers Association State Competition at UC Davis in October. A few months after attending Tanglewood, Chang said she felt as connected to music as she had ever been. Ready to play, Chang approached the stage energized and enthusiastic.

As she lifted her violin towards her chin, Chang took a few breaths and let an unexpected calm overtake her. Buzzing from the rush within her veins, Chang moved her bow and lost herself in her performance, pouring her emotions into the music.

Chang said she was so immersed in her playing that she didn’t hear the judges and audience members clapping for her to stop.

“When I walked offstage, I was so happy,” Chang said. “I didn’t expect to win, just because there were so many amazing musicians competing against me, but I didn’t really care because I was so proud of my performance. And then when I found out that I had won, that was just the cherry on top.”

Chang considered her performance at that competition as an indication of the progress she has made.

“The competition aspect of music is one that I used to dread,” Chang said. “I used to get so nervous and so in my head before competitions that by the time I had to audition, I had convinced myself I was going to mess up or somehow fail epically, which negatively affected my playing. But now, realizing that music isn’t solely about competition, I’ve been able to relax before performances, see each competition as a learning opportunity and appreciate the music for what it is – art. There’s nothing quite like the feeling you get during or after a successful performance.”

Despite not auditioning for a conservatory, Chang said she still plans on playing music in the future. In college, Chang said she hopes to double major or minor in music, join her school orchestra and play in chamber ensembles.

“Playing violin has honestly become one of my greatest joys in life, and I am forever grateful that I have had the opportunity to learn and play,” Chang said. “Through violin, I’ve been able to express my emotions in a way that I cannot with words, I’ve developed bonds and friendships with other musicians and I’ve been able to share my love and touch the lives of others.”