King of the Court: Johnny Juzang 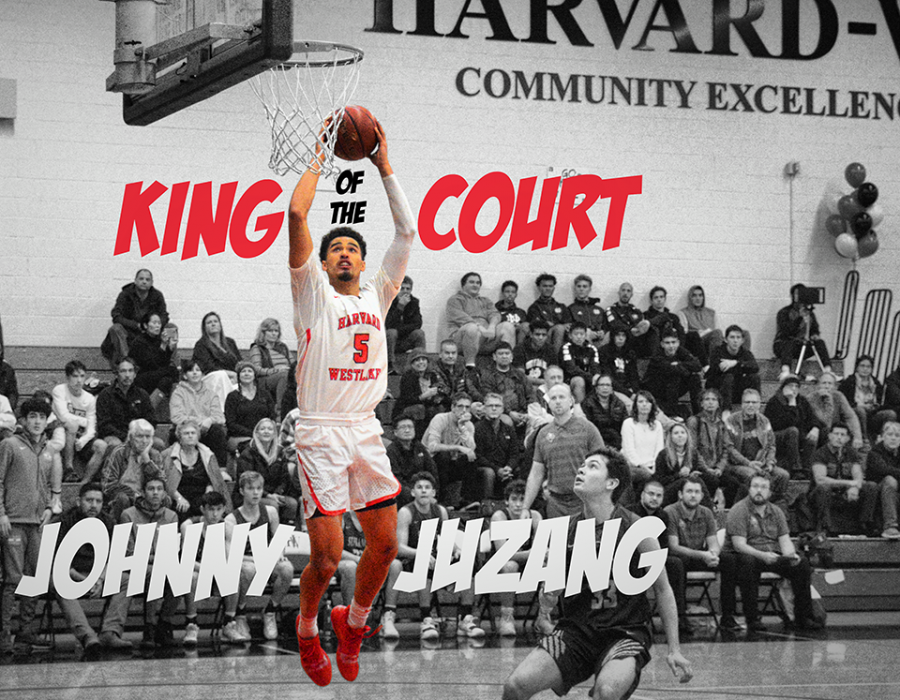 It’s 6:30 AM. The average Harvard-Westlake student is in bed, hearing the sound of their alarm clock go off. Johnny Juzang ’20 has grown accustomed to hearing the “swish of a net” and a basketball bounce on the hardwood at this hour. In the early hours before school, Johnny Juzang consistently puts in work either on the basketball court or in the weight room.

His busy schedule continues throughout the school day.  He spends free periods with the trainers and after the school day is over he usually lifts with his team, followed by practice.

Johnny Juzang’s work ethic  has lead him to be the 19th ranked player in the 2020 class, and  a five-star recruit according to ESPN.

Johnny Juzang said playing basketball started at a young age because of his older brother Christian’s influence. Christian Juzang graduated from Viewpoint School in 2015 and is now a key member of the Harvard University basketball team, starting in 21 games last year at point guard, according to Harvard Athletics.

“I started [playing basketball] when I was like four,” Juzang said. “We [Christian Juzang and Johnny Juzang] had a basketball hoop in my front yard so we’d just go out and play for fun.”

Although Johnny Juzang has been playing basketball for years, he didn’t always watch basketball.

“I didn’t really watch a lot of basketball growing up, until the last like year or two,” Johnny Juzang said, “I always looked up to players like Kobe [Bryant] and Steve Nash.”

Johnny Juzang said he has tried to emulate these players on the court.  In his three-year high school career so far, he has averaged 19.5 points per game and 8.2 rebounds per game, according to MaxPreps.

Teammate and forward Brase Dottin ’20 said Johnny Juzang is a game changer when on the court.

“[Johnny Juzang is] very talented,” Dottin said. “He can shoot the ball wherever, he can get his own shot at all times, that’s what makes it easy for us when we need a bucket late.”

Off the court, Johnny Juzang said he still holds himself to a high standard in the classroom.

“I pay attention in class, try and get as much done during the school day as I can,” Johnny Juzang said.  “I manage my time well, so I don’t really end up doing too much work at home.”

His work ethic on and off the court is part of the reason he currently holds 15 Division I basketball offers. His list of offers include schools such as the University of Kansas, and the third ranked University of Virginia, yet Johnny Juzang said he feels unphased by the pressure that comes with the recruiting process.

“I’m taking my time with  [the recruiting process],” Johnny Juzang said. “I want to find a place that really feels right, and has a coaching staff with people that I really like and trust. Also a place that can help with my goals and what I want to do.”

“To keep it real, I want to be in college for a year, have a great year, learn a lot, have a great experience,” Johnny Juzang said. “Then my goal is to go pro.”

Over the past two years, high school basketball has gained a much larger following nationally due to social media. Players such as Zion Williamson (now playing at Duke University) and LaMelo Ball (Spire Institute) became household names due to their play and social media presencewhile still in high school. While Johnny Juzang admits that social media and basketball are intertwined, said he prefers to let his play on the court do the talking.

“I don’t really worry about social media too much,” Johnny Juzang said. “The biggest thing for me is focusing on becoming a better player. There’s a lot of players that have great highlight reels but aren’t great basketball players. At the end of the day that’s great. You get a lot of followers but you don’t really translate to being a good basketball player and hopefully playing pro one day. I’ve learned how to keep myself relevant [on social media], but it’s not my priority.”

Johnny Juzang said that for the rest of the season the team is focused on working hard in order to achieve success in the playoffs.

“Our goals for the team [is] just for everybody to strive to get better everyday, and learn something new everyday,” Johnny Juzang said. “I think that will help accomplish our goals which are to be league champions and win the CIF and state titles.”