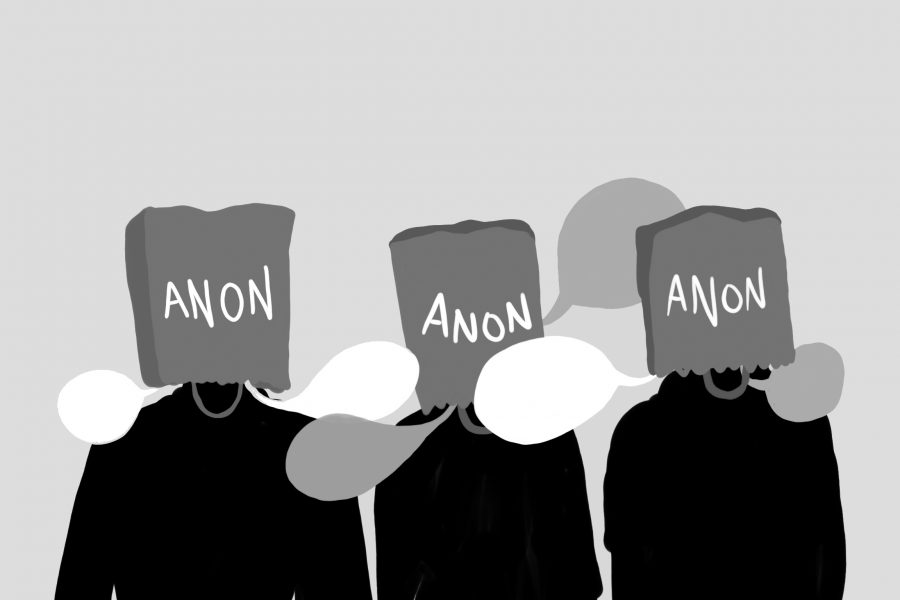 Louis, Megan, Lauren, Gordon, Phoebe*. A name and a star, the Chronicle’s method of citing anonymous quotes, can elicit powerful reactions within the school community. When a source who criticizes the school is cloaked in anonymity, backlash often follows. Some question the accuracy of the quote. Others wonder whether it is ethical for students to potentially damage reputations without putting their own names behind it. Though many anonymous quotes are not critical toward the school, those which are present a complicated issue. It is not lost on the writers that such quotes can have a significant impact on the reputations of the targets. Nevertheless, the school paper is a necessary channel for members of the community to air their concerns, whether they choose to remain anonymous or not.

When students have issues with members of the faculty, though, they should not immediately turn to the paper. In many cases, the easiest way to resolve a problem is to speak directly to the source or talk to deans and other trusted advisers. Our administrators are trained to deal with sensitive issues and attempt to resolve them privately.

However, the answer may not always be that simple. Only the student fully understands the situation that they are in, and it is not appropriate for others to tell them the best approach to take. For example, to some athletes, the thought of voicing concerns to the coaching staff may raise fear of retribution like getting benched in the next game or possibly endangering their playing future. And while the school administration can speak to teachers and coaches on behalf of students, the message they convey may be diluted or distorted in translation.

The paper presents another option–one that guarantees unfiltered communication, a wide audience and protection through anonymity. Students who choose to speak to the paper anonymously often do so because they have exhausted all other options, their opinions stifled but not ready to be silenced. The paper can give them voice, projecting it through a megaphone heard by the entire school community.

Controversial quotes also spark a constructive dialogue among all stakeholders. When someone speaks up in a public forum about an issue, it can motivate others to do the same. Rather than keeping the discussion confined to just a few people, the quotes draw the larger school community into the conversation and can lead to a successful resolution.

The decision to publish anonymous criticisms comes, of course, with substantial responsibility. Though all readers may see are harsh words on a page, hidden behind each anonymous quote are weeks of hard, meticulous work. Writers do all that they can to corroborate quotes. They contact a litany of other sources, ask for a wide variety of opinions on the subject and make sure that the quote is factually correct. In addition, writers give all interested parties the opportunity to respond to criticisms in order to present a holistic story.

Even after taking these steps, it is never guaranteed that the quote will be fully representative. That is a risk that the paper must nevertheless be willing to take for the health of the community. At the end of the day, students must be able to hold the school accountable. Eliminating the anonymous quote, a device specifically designed to let students fearlessly tell the uncomfortable truth, would do just the opposite. We cannot live in an environment where we are afraid to ruffle feathers, where comfort takes priority over controversy and where complacency prevails. Expression that could lead to positive change is simply too important to silence.