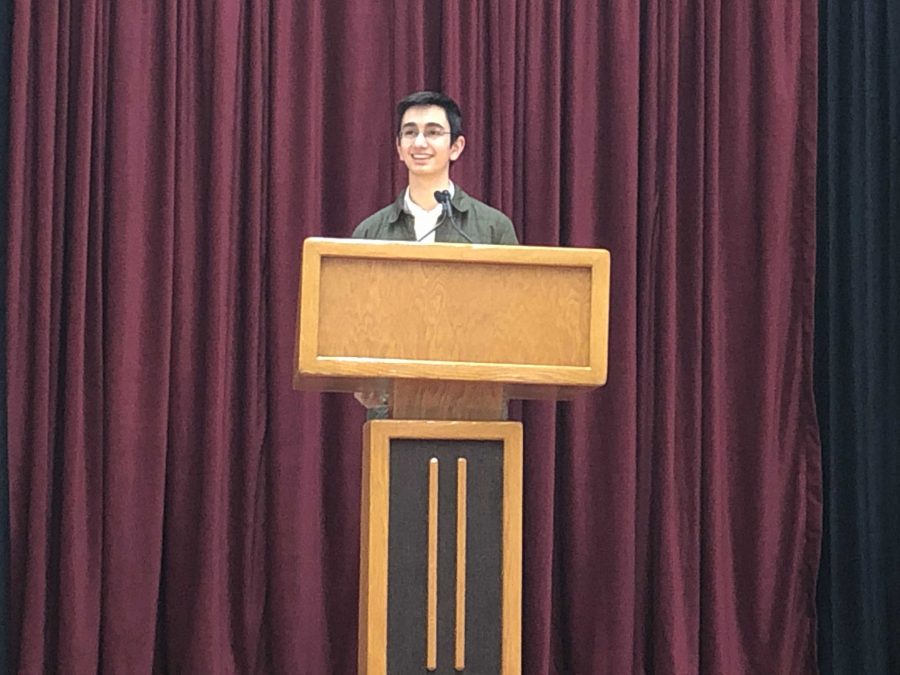 Grace Burton ’20 and Michael Lehrhoff ’20 will serve as Head Prefects for the 2019-2020 school year. Results were announced after school in an email to the student body March 25.

Following an ad-hoc committee’s recent suggestions regarding ways to make the school more inclusive, this year’s election determined Head Prefects based on the number of votes each candidate received, regardless of gender

The four candidates were notified of the election results in Dean of Students Jordan Church’s office after polls closed. Lehrhoff said he was honored to be elected by the student body.

“It’s a bizarre feeling,” Lehrhoff said. “I had always hoped to serve in the position, but now that it’s a reality, I’m eager to see what next year brings. After the speeches, everyone was exiting the gym at once. Being in that large crowd reminded me that I’m just one part of a whole community of people trying to improve Harvard-Westlake for everyone. It’s gratifying to know that.”

Burton said she aims to enhance the community even further in her position next year.

“I hope to welcome the new sophomores and help ease their transition to the Upper School,” Burton said. “Overall, my primary goal will be to create a stronger community in order to make Harvard-Westlake feel more like a home, rather than simply somewhere we study.”

In addition to Burton and Lehrhoff, Noah Aire ’20 and Jaya Nayar ’20 promoted their campaigns to the sophomore and junior classes March 20.  The four candidates first introduced themselves with brief personal statements, before answering an unprepared question addressing what the biggest misconceptions about themselves are.

Lehrhoff said his peers tend to think he is self-assured, despite his personal insecurities.

“One of the biggest misconceptions about me is that I have a very confident approach to things and that I’m a very good student,” Lehrhoff said. “But it’s really a struggle coming to Harvard-Westlake. I came in seventh grade, so it was helpful to have a group of students that I have grown up with. It is difficult to establish yourself in a new place; it’s difficult to make this place your own and to interact with people within your circle and within other circles.”

Aire also explained his own struggle with self-confidence, something he said he is constantly striving to overcome.

“One of the biggest things I’ve had to deal with this past year was two voices in my head,” Aire said. “There’s one voice in my head that tells me, ‘Don’t go out there. Don’t do it because no one wants to hear you.’ Then I choose to listen to the other voice, which is like, ‘Go out there. Do it. The only way you’re going to get over it is to do it.’”

In addition to addressing misconceptions about themselves, the candidates answered a prepared question about how their failures have shaped their current mindsets and goals.

Nayar disclosed her personal struggle with her health and explained how the experience motivated her to better herself and reduce stress for the entire student body through policy changes.

“I’ve had a pretty easy life,” Nayar said. “It was predictable until the end of tenth grade, when I was told that I had a tumor. That’s not easy when you’re 16 years old. My greatest failure was that I could empathize with, but not truly understand major struggles other people face until I had my own health issues. Recognizing this is what’s driven me to improve myself at Harvard-Westlake.”

Burton said that a prefect should act as a friend for the student body, which she learned after the death of her grandmother four years ago due to brain cancer.

“In the months before [my grandmother] passed away, I only visited her once,” Burton said. “I was afraid to confront the emotions and to see her weak, and because of my immaturity, I missed those last moments with her. And worst of all, I wasn’t there for her when she needed me most. That’s my greatest failure. So ever since then, I’ve promised myself that I will never again let fear control me and stop me from doing what’s right and from being there for those who need me.”