The Harvard-Westlake Chronicle • May 1, 2019 • https://hwchronicle.com/56707/sports/average-season-follows-coaching-change/ 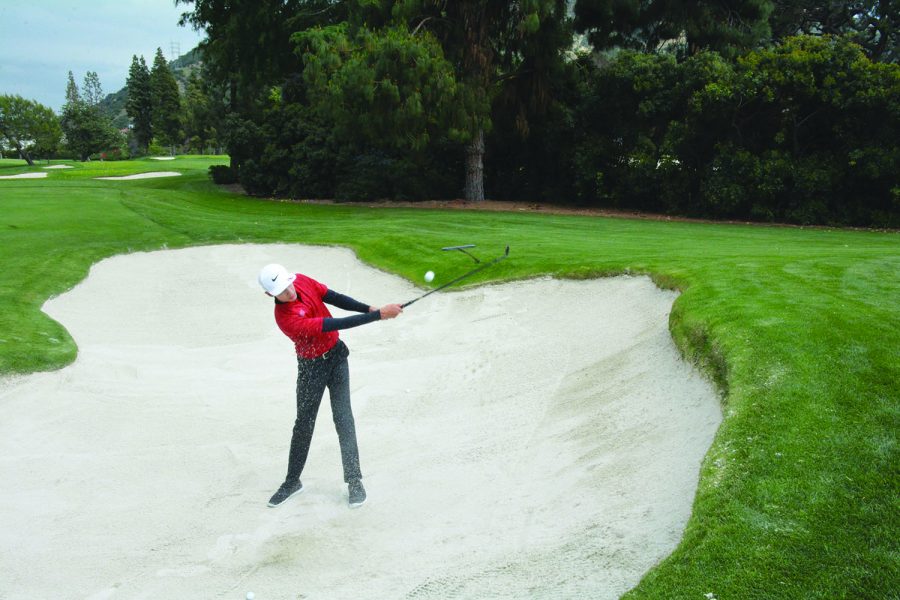 BATTLE OF BUNKER HILL: Assistant Opinion Editor Tammer Bagdasarian ’20 chips onto the green from the bunker in the 209-212 win over Notre Dame High School on April 16. Credit: Jay Lassiter/Chronicle

The members of the boys’ golf team struggled with consistency as they almost split their first ten tournaments of the season, bringing them to an overall record of 6-4 and a league record of 4-3 as they prepare to enter the Mission League Individual Tournament.

“We have had many ups and downs in the season so far, but mainly downs,” Dean Barkin ’20 said. “I think that everyone has had a good time though since we all get to play.”

The Wolverines started this season with two wins against Brentwood School and Chaminade College Preparatory School on Feb. 20 and Feb. 27 for their home opener respectively.

“The coaching change was tough at the beginning, especially with the team being accustomed to the old coach,” captain Alex Hong ’19 said. “As time has gone on, [Wood] has grown on us and is definitely making an effort to make this team better for the future.”

Lyon Chung ’21 said team bonding was important to him and the team.

“Besides winning, I hope that we can grow together as a team,” Chung said. “I hope that for the rest of the season, the team plays better every day.”

The team will play in a Mission League tournament on May 2 at Brookside Golf Club in Pasadena, followed by three CIF Southern Section playoff matches.

Wood said he is proud of the team’s growth this season.

“The team has done a good job of coming together, adjusting to the new program routines and going through some adversity,” Wood said. “Hopefully, we are peaking at the right time, and we can give our best to see where that puts us.”