The Harvard-Westlake Chronicle • May 1, 2019 • https://hwchronicle.com/56733/sports/late-season-upsets-over-bishop-alemany-and-notre-dame-improve-mission-league-record/ 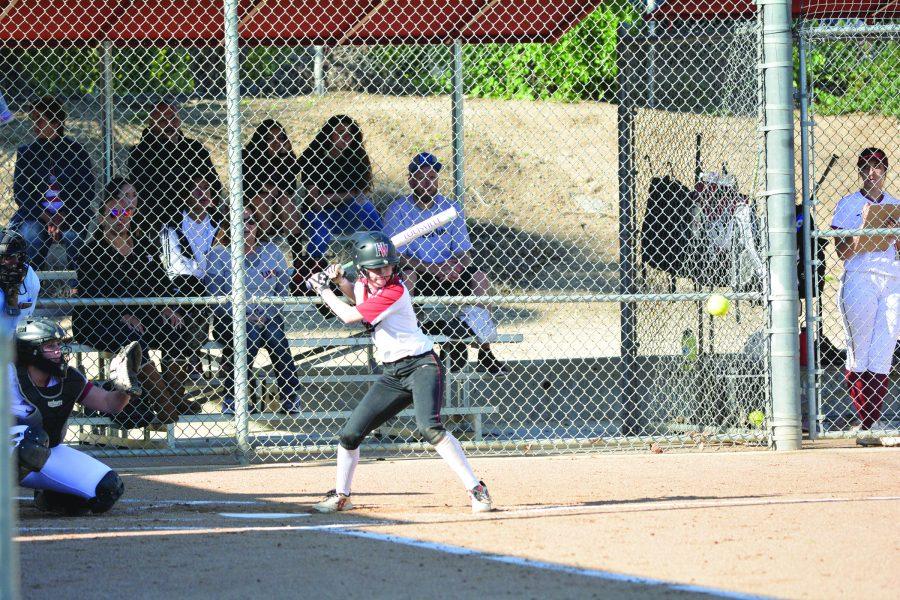 KAT IN THE SOFTBALL HAT: Shortstop Kat Swander ’19 prepares to hit in the 7-0 loss against Alemany High School on March 12. The squad is currently 1-1 against Alemany this season, beating the Warriors for the first time April 17 in its second matchup. Credit: Jay Lassiter/Chronicle

Following a slow 0-4 start to league play, the softball team pulled off three league wins in their last four games and won four of their last six games overall.

Coach Brittany Moeai said that she credits the team’s transformation to their positive attitude.

“The team has learned to work together and stay positive no matter what the outcome of the games could be,” Moeai said. “This has helped them to stay motivated and keep their efforts going until the last pitch.”

The team credits its success to finding its identity at the perfect time.

“I’d say part of our success has come from changing the strategy to fit who we currently have, and we’ve found what works for our team,” center fielder Lauren Witmer ’19 said. “We have a lineup that can really string together runs, and our biggest strengths are our energy and communication.”

Moeai said that she also felt impacted by team’s energy.

“These girls are a joy to coach, and inspire me to be the best person I can be,” Moeai said.

The recent surge in success included a win over league rival Notre Dame High School where the Wolverines scored a season-high 13 runs to defeat the Knights 13-8. Less than 30 days before, the Wolverines lost to that same team 11-1.

To go along with their 13 runs against Notre Dame, the Wolverines defeated Marlborough School 6-1 in one game and 10-0 in another.

Players said that although the team is relatively small, it is very close-knit and together, they have created a positive energy.

“You can feel the energy in the dugout,” Witmer said. “Everyone wants to be there to play and to support, and we all cheer each other on.”

The squad will compete in the first round of the playoffs this week, but the game time and opponent has yet to be determined as of press time.