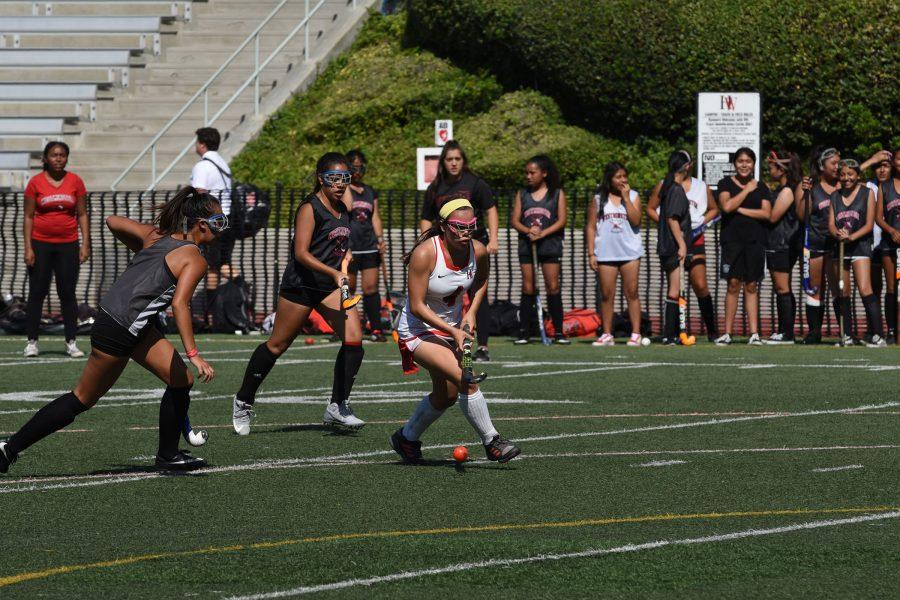 My first experience with Harvard-Westlake field hockey was in third grade. Young and scared, my three best friends and I had recently started playing and were looking to perfect our skills during the summer, or at least hit the ball a few yards further. The days were filled with great games, super fun, cool older girls and some field hockey too. We were all very impressed with Harvard-Westlake, and I don’t think I could have even imagined coming here at the time. The girls were too mature and full of confidence. Even now, I look around and realize my third-grade self would never believe I attend Harvard-Westlake next to amazing debaters, robot builders and people overall. When the hours get too long and I get home from practice a little late, I think of how my third-grade self would be in awe of my school. As a freshman, the Harvard-Westlake field hockey team was intimidating. I didn’t know anyone yet and soon would have to fly to Florida with them. Always following the advice of “don’t get in the car with strangers,” it was even more daunting that soon I would get in a plane with a bunch of people I didn’t know to stay far away from home.

But, the moment I got there, the team embraced me as their own. I suddenly gained 20-something upper school role-models in a day. Every day, I looked forward to the shuttle bus to the Upper School (which is hard to do) because it meant I would soon get to hang out with my awesome new heroes. While I was still intimidated by their incredible skill, I was able to recognize how their abilities brought greatness to our team. Whether they are incredible at drama, chemistry, fencing or even dressmaking, each person is able to bring a different outlook and allow the team to see a full picture.

Freshman year was a great experience with 12 returning seniors on the team. Perhaps it was the move to the new campus or just that we were closer in age, but sophomore year I began to see myself as not only a team member but a friend to the seniors that had sometimes intimidated me the year before.

This transition has carried over to my general view: one day, you will probably be in the position that you look up to and see leaders not as someone to be scared of but someone to learn from. Be a friend to everyone coming up, once you were there, and soon they will be at the upper campus too. But, just like at the end of that year, when I lost my 12 role models, your leader might have to go one day too. This, however, doesn’t mean that you can stop learning from them or forget the lessons you learned while you were there. You can only become your best self by constantly learning, so gather as many people to learn from as possible.

We ended my sophomore season undefeated, winning the League and Tournament of Champions games. Having finished such an amazing year, and then losing 12 senior players, who had guided us to victory, we thought we may be in for a rebuilding year this year. The summer was spent at lots of camps, and we had many students continue to join WC Riptide so we could work together offseason in a hope to maintain our excellence. As readers of the Chronicle Sports section may know, we did it!

Harvard-Westlake field hockey has been integral to my high school experience. As a student-athlete, there is often pressure put on improving one’s own game. With the pressure of academics and the long bus rides, there can be a temptation to just focus on improving one’s individual skills, but the excellent coaching and team bonds I found playing at Harvard-Westlake have provided me with skills and friendships that will last long after I leave Harvard-Westlake. I look forward to cheering our Harvard Westlake field hockey team in 2021 and beyond.