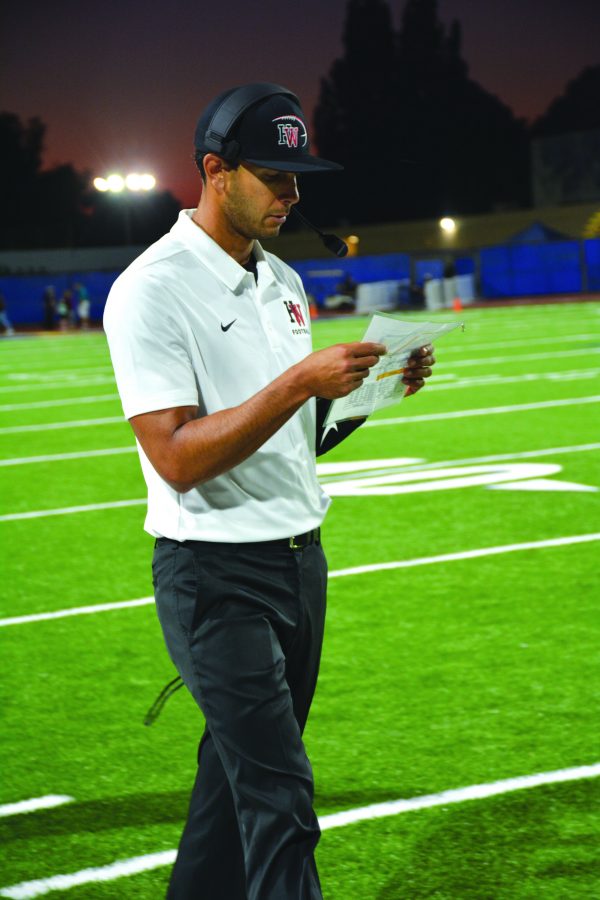 “I have always preached that being a good husband and father is the most important part of being a man, and my last few years of coaching have not allowed me to be those things to my family,” Burnett said in an email to the football families. “The external pressures of coaching football have increased dramatically over the last several years, and those pressures over the past year have taken a personal toll on me and my family.”

Head of Athletics Terry Barnum sent an email with Burnett’s message to the football families Aug. 5 before the first day of team camp, the program’s annual summer training.

“Summer has been going great,” Barnum said. “We have 50 guys out for the high school team which is a good number for us. The camp went really well. Guys had a good time. It was a mix of football and social activities, so they really got a chance to build some team bonds which hopefully carries to a successful year.”

Lambert said although the coaching change was a surprise, the players are still focused on their initial preseason goals.

“It was definitely a little bit of a shock from everybody’s standpoint, from players to administration, to parents and myself and the rest of the staff as well, but I think the kids’ resiliency really helped us move from absorbing that shock,” Lambert said. “We started this with a mission in the off-season, working hard in the weight room and working hard on our skills. We have to get back to that because we don’t want that to go as time wasted in the off-season. We want to make sure that becomes something fruitful for us on Friday nights.”

“Over the span of the team camp we all really came together and bought into each other and our coaching staff as we focus on the season ahead,” Thompson said. ‘[Lambert] has shown a lot of trust in us players and is designing a lot of our game plan based on the personnel we have on our team, playing to our strengths.”

Lambert joined the coaching staff this summer as an assistant intended to primarily focus on defense. Although Lambert is a new addition to the staff, Barnum said the athletic department wanted to ensure the team was comfortable with the Interim Head.

“Instead of trying to introduce someone new two weeks before the first game, we felt giving someone who has already been here with the boys, understands our system has a good relationship with the players gave both our boys and our program the best chance for success,” Barnum said. In addition to years of college playing and coaching experience, Lambert was most recently the head coach at La Cañada High School and Santa Monica High School.

“I’ve had amazing mentors from multiple state championship coaches, the college level, being at a public school as well, my experience from all those mentors really gave me a perspective on different aspects of football,” Lambert said. “When I became the head coach, I was able to look back, ‘well, which coach did that really well,’ and how can I implement that into what we are trying to do at this school.”

Lineman Julian Kay ’21 said Lambert is a great addition to the program.“[Lambert] brings passion, energy and the unique ability to communicate his ideas as well as implement suggestions from the team,” Kay said.Wide receiver Brendan Kang ’20 said despite the unfortunate timing of the coaching change, the team has recovered well.

“We strongly believe that the team handled the adversity of last minute head coaching change extremely well,” Kang said. “We believe it helped us come together and understand that we are all striving for the same goal: winning games and eventually a division championship. We are determined to win, and we are buying into [Lambert] and the rest of the staff.”