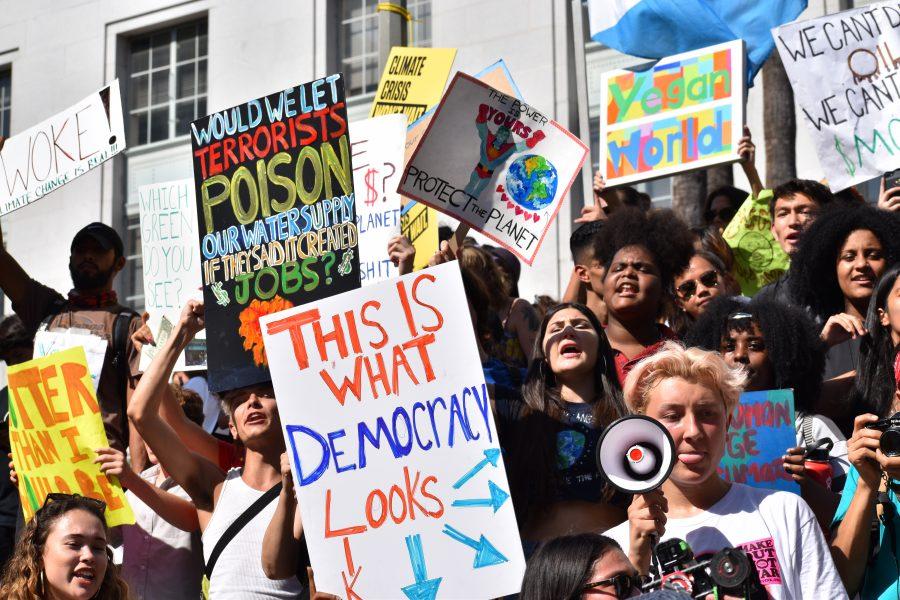 Upper school students skipped class to join the Global Climate Strike on Sept. 20 at Pershing Square in Downtown Los Angeles, raising their voices against lack of government and business action regarding the climate crisis.

Participants of the strike urged leaders to take meaningful initiative in order to help the environment, according to the Los Angeles Times.The school administration decided to excuse students from class with parental permission, after receiving encouragement from Environmental Club leaders Erika Ekstrand ’20 and Helen Graham ’21.

In an email sent to all upper school students, Ekstrand and Graham provided directions to the march location, with specific metro routes and a meeting place for students to gather.

Greta Thunberg, a 16-year-old from Sweden, is a prominent figure in this youth activist movement.

Last year, Thunberg missed school every Friday to protest outside the Swedish parliament.

Thunberg’s actions sparked the Fridays For Future movement, which has inspired students across the globe to miss school and hold their own protests in their own cities, according to the movement’s website.

Ekstrand said that she is a long-time follower of Thunberg’s movement. She has been working with faculty members to invite more speakers to address the issue on campus, and hopes to inspire more students to get involved and spread awareness.

“I’ve been really inspired by [Thunberg] and what she’s been able to do,” Ekstrand said. “It just shows that if you’re really committed to something, you can make a difference, and you just have to continue and go through with it.”

Spanish teacher Margot Riemer said she supports Ekstrand, and hopes that more students become excited about the promise of youth activism in the future.

“When I first heard about [Thunberg] last year, I was in shock that a teenager was taking on a problem that we adults should have been dealing with,” Riemer said. “Bit by bit, my shock has turned to hope. I admire her and all the people participating in the climate strikes so much, and I am so grateful to them for showing me a way forward, a ray of hope.”

The ultimate goal for the strikers was to convince governments to make active policies that will cut carbon emissions and lower the global temperature to under two degrees Celsius. The strikes came just days before leaders around the world gathered in New York at the United Nations Climate Summit to discuss new prospective plans of action that would bring meaningful change, according to The Washington Post.

“We need to raise awareness and let [leaders] know that we want governments to change, [especially] environmental policy changes, because that is so important for the whole world,” Ekstrand said.

Younger generations encouraged to care for their environment

At the strike, students listened to keynote speakers and marched through the streets until they reached City Hall. Graham, who attended the strike, said that she enjoyed seeing the wide range of people who attended.“[It was nice to see] all of the really young kids that were really enthusiastic and passionate about the issue,” Graham said. “Even elementary school kids were talking knowledgeably about the topic.”

This march marks one of the biggest youth-led climate strikes in history. Many cities, in over 150 different countries, experienced turnouts totalling about 100,000. In Los Angeles approximately 8,000 individuals participated in the strike downtown, according to the New York Times.

George Grube ’20 said he attended the strike to show his support for the cause and to emphasize the importance in numbers.

“We don’t have any more time to act on climate change,” Grube said. “No matter what the president says, no matter what the [Environmental Protection Agency] says, human society has to act now in order to fix the problem. There’s not another way. No matter what individual people can do to decrease their carbon impact, there has to be widespread societal change, so these climate strikes are vital to the health of our world and future human civilization.”

Ford McDill ’21 said that what stood out most for him at the strike was the sense of unity. He said he feels it is important for the youth to protest in this way to speak up about policies that they can not vote about.

“It’s up to the youth to fix this issue because this is our planet and if we ignore it, we will destroy it,” McDill said. “That’s why we have to show that we care with things like the strike. We have to illustrate the important issues and make our voices heard, despite being young.”

Fighting for climate change is not only a matter of caring about the Earth, but also about everyone who lives on it, Graham said. Graham added that she thinks more people need to strike to protect the world’s inhabitants, especially people of color and low-income communities, who tend to be affected disproportionately.

“If you feel that you care about other people and your own future, then you should also care about climate change and the effects that it has on your quality of life, the quality of life of others and the environment around you,” Graham said.

Despite the monumental turnout globally, it is unclear whether the strikes will actually convince governments to change their policies and attitudes about the climate, according to the New York Times. World-leaders were expected to attend the summit last week with concrete plans to change the global economy that will avoid worsening the climate; however, China, one of the biggest industrial economies of the world, did not mention any new plans to take stronger climate action, according to the New York Times.

Nevertheless, it is evident that the movement will continue to grow as Thunberg and students take charge all over the world, concerned about their own future, according to the Washington Post.

“Our engagement with the public, the media and with government officials is part of what changes the kinds of policies they put in place,” Graham said. “Apathy is what leads to decisions that do not benefit the people of the United States and the environment, so it is important to stay politically engaged.”