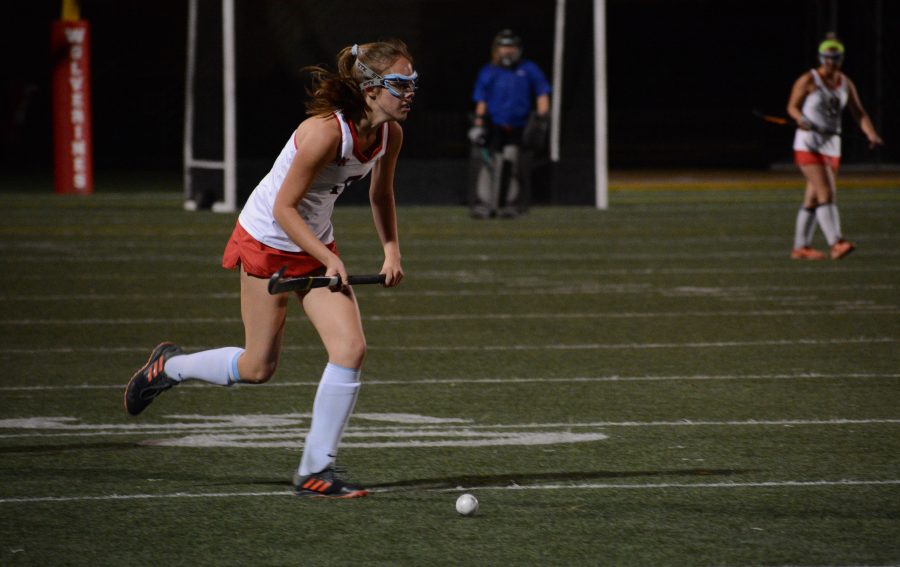 Tessa Augsberger '22 pushes the ball up the pitch against Great Oak in a 8-0 victory. Credit: Lucas Lee/Chronicle

In the first round of the Field Hockey Tournament of Champions, the field hockey team defeated Great Oak High School 8-0 and will advance to the semifinals to continue its quest for a LAFHA Championship.

In previous games, the Wolverines struggled to put points on the board, but this was not the case today. In the first three minutes, Midfielder and Captain Rachel Brown ’20 scored off of a fast break. Forward Bella Ganocy ’22 added to the lead shortly after. By the end of the first ten minutes, the Wolverines led 3-0 with another Bella Ganocy goal. In the second half the team pulled away as they scored five more goals.

Out of the Ordinary

Tip off started later than scheduled so Coach Creznic’s team could practice inbounding drills on offense. During the first half, Two Great Oak players suffered minor injuries: an injured ankle and ball to the head. Despite this, they finished the half without needing a substitution. Throughout the entire game, Creznic rotated in players at different positions. Fullback Iris Huang ’21 and Sweeper Natalie Barnouw ‘21 got the opportunity to play on the offensive side of the ball. Barnouw even scored in the second half of the game. The team’s pregame drills paid dividends in the 8-0 victory.

“We started the game with high intensity and maintained it throughout both halves, which is why the ball was rarely by our goal,” said Smolev. “The defense was very successful today because with our teams high intensity and focus, we made sure we always got the ball before our opponents.”

With the return of Barnouw from injury, the team continues to improve its defense.

“Our defense has become even more strong now that Natalie is back, and it is reassuring to have her calm composure, advanced field vision, and great defensive skills backing our team again,” Bella Ganocy said.

The officiating worked against the Wolverine’s ability to produce fast breaks. The ball was called back several times which prevented Brown from building more momentum for the offense.

The team’s next game is on Thursday at home which will be the semifinal game.