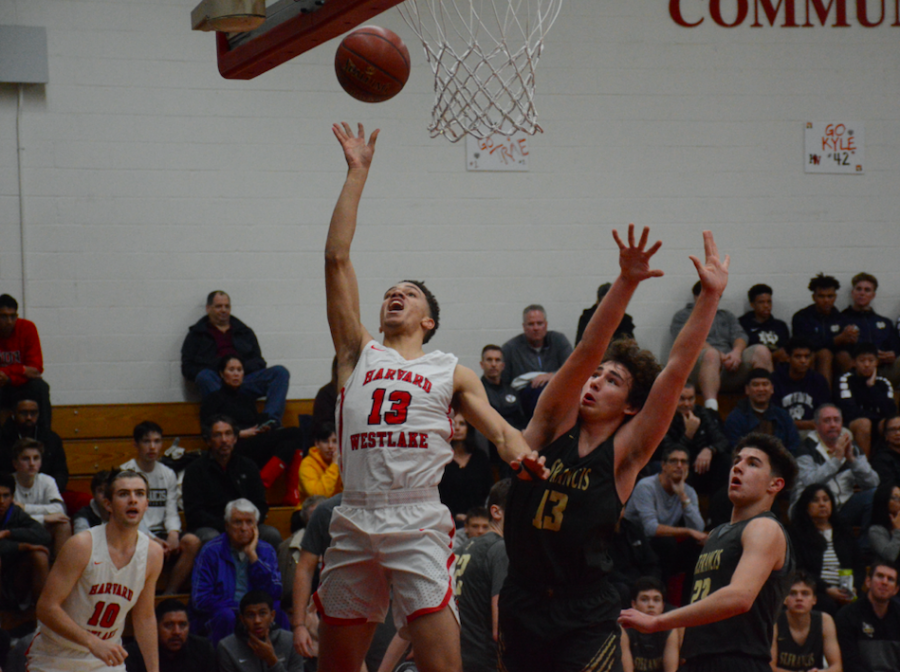 Boys’ Basketball beat Van Nuys High School 81-30 last night in its first home game of the season and the first round of the Wolverine Invitational. The school is hosting the tournament in Taper Gym from Nov. 19 to Nov. 23. Last season the squad finished 21-9 overall, losing in the third round of CIF Playoffs to Santa Margarita High School.

Since last season, the team lost standout Johnny Juzang ’19 after he reclassified to attend Kentucky University this fall. Wing Holden McRae ’20 said although Juzang is no longer with them, the roster is still incredibly strong.

“The great thing is, we have a lot of the same players as last year so we all know each other really well,” McRae said. “We also have a couple key additions in [Russell] and our freshman [Huggins]. Losing [Juzang], everyone has to take on an even bigger role than last year, and I think our guys are ready to meet that challenge.”

The starting lineup consisted of McRae, guard Spencer Hubbard ’20, forward Mason Hooks ’20, forward Truman Gettings ’21 and wing Brase Dottin ’20. Wing Adam Hinton ’21 came off the bench to contribute over 20 points for the squad. The Wolverines started the game strong, finishing the first quarter 25-11 and ending the half 58-20. McRae commented on the first game feelings last night.

“It felt amazing to get back on the floor,” McRae said. “We all worked really hard this offseason and we all were really excited to get the chance to demonstrate that. The first game of the season is always a little nerve wracking, but our guys did a great job responding to their nerves and ultimately getting the win.”

The squad remained dominant throughout the game, consistently producing offensively and getting key defensive stops in order to maintain momentum. In addition, the team had a significant height advantage over Van Nuys, aiding its success. Due to its command on the lead, the team was able to play all of its roster last night, giving each player more court experience. McRae said the team found success by sticking to what works.

“Last night, the biggest thing for us was just playing the way we know how to play, ” McRae said. “We had a couple bumps here and there, but we know what we have to work on. This season, our key to success will be to keep things simple and do everything we can for the betterment of the team. We’re a group of pretty unselfish guys, and we want our style of play to reflect that.”