Dawn of a Dynasty 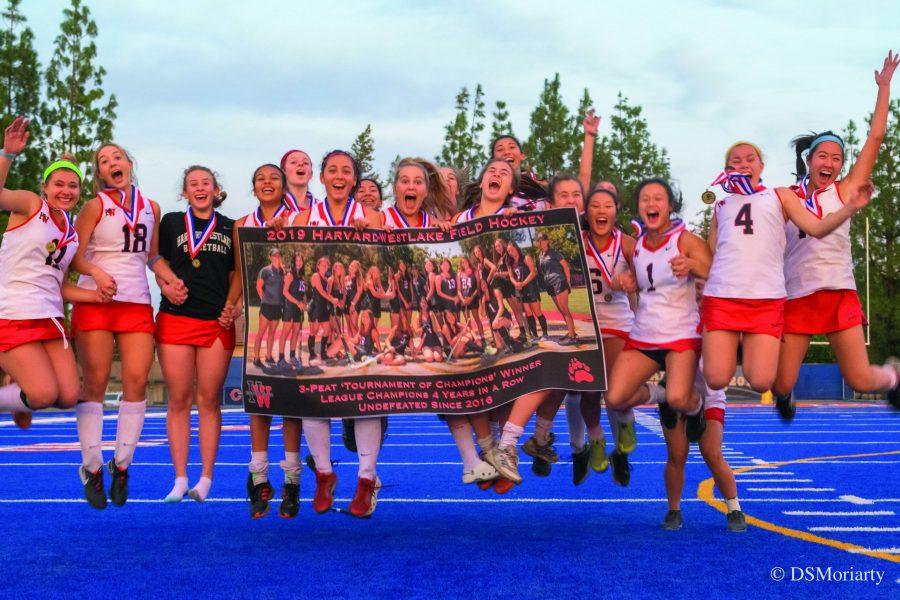 As the buzzer went off, captain and forward Astor Wu ’20 realized that the LAFHA Championship game was over. Looking up from her stance, she locked eyes with captain and midfielder Rachel Brown ’20 and the feeling of victory finally sank in.

“Within a split second, I just remember sprinting into a cluster of girls where everyone was screaming and hugging, jumping up and down in excitement,” Wu said. “All we could do was laugh and hug each other. Having had gone through so much with [Brown] by my side, this was such a pure, bittersweet moment.”

The field hockey team made history, winning three consecutive championships with a record of 57-0. This past season, the squad finished 18-0, building upon its 20-0 record last year. Brown said she was elated to see the Wolverines’ hard work come to fruition after the 57-0 record and third title.

“To win three consecutive league champions is a dream come true,” Brown said. “I cannot believe I am lucky enough to be on a team that can excel in any scenario. We work hard, we play hard and it shows.”

Brown said the team’s lively traditions create a common bond between the current team and alumni to the program. This bond between Wolverines from the past and present is another reason for the team’s continued success, Brown said.

“Our strong alumni base is the reason we are where we are today,” Brown said. “We still continue their pregame hype from before and often talk fondly of our previous times. The Harvard-Westlake field hockey team is more than just our current players. It feels like a full community.”

Going into the season after winning two consecutive LAFHA Championships and completing two undefeated seasons, there were high expectations for the season, Brown said.

“When looking at the amount of wins and undefeated seasons from an outside perspective, it can seem harrowing to continue the trend.” Brown said. “But inside, the team knew what we were building this year and [that we] had the ability to continue to win.”

While the team has an expectation to continue winning championships, the 57-0 game win streak adds more pressure to every regular and preseason game.

“I was surprised, to be honest, with this season,” forward and captain Sam Yeh ’20 said. “I hoped to win the championship again, but I wasn’t sure that we could keep our win streak the entire season.”

Despite being familiar with the pressure of playoffs, the players were able to overcome their nerves, Brown said.

“While we were nervous for the playoffs, the team always believed that we would be able to win,” Brown said. “This cautious optimism allowed us to play our best in every game aware that we may lose our long streak.”Over the past three years, the team has made winning a tradition, Yeh said.

“Both this year and last we definitely weren’t sure that we would be able to keep the streak going or win again,” Yeh said. “I think that there’s always going to be a little doubt of whether the team can live up to expectations just because the bar was set so high two years ago. We thought it was a once in a lifetime season, but then somehow we did it again and then again this year.”

The team’s success came from its emphasis on chemistry, Brown said.

“The team unity was essential to our wins,” Brown said. “From pregame hype to pep talks when we walked onto the field, we knew we were a strong team.”

The trust between the players culminated in their ability to work as a cohesive unit, midfielder Sarina Smolev ’22 said.

“Some key factors in this year’s success were our communication and positive team dynamic as well as starting each game with high intensity,” Smolev said.The leadership of alumni has left the team with a strong system for developing players and continuingits streak, Brown said.

The team’s success cannot be acknowledged without the contributions of head coach and program head Erin Creznic, who has led the team to a 24-0 record in league and three championships in the last three years.

“We would not have our success without Coach Creznic,” Brown said. “When we had won our championship, I was extremely happy until I realized this was my last time playing with Creznic. Creznic gave us the room to be leaders in an environment in which we know she has our back. The confidence she builds in her players is essential on and off the field. She is more than just a coach she is an excellentall-around mentor.”

“It’s very very exciting and especially as a senior it was a really special way to end my high school career,” Yeh said. “We’re now 57-0, and it still amazes me whenever I think about it.”After winning its third consecutive title, the team is beginning to prepare for next season with offseason training. The squad has confidence in the junior class to step up as leaders, Yeh said.

“I’m excited for what the team will continue to do next season and I have complete faith in the current junior class to lead a strong season next year,” Yeh said.Compared to last season, this year’s defense has less game time experience forward Penny Juarez ’21 said.

“I think that our defense improved over the season, but wehave a young defensive squad, so the defense was not as experienced as the 2018 team,” Juarez said. “That being said, they were very strong over the whole season including our championship game.”

Because seven players are graduating this year, the underclassmen will have to step up, Smolev said.“It’s really exciting to have won three championships, andit made all of our hard work throughout the season worth it,”Smolev said. “Also, as our program gains more recognition with each undefeated championship, our team will continue toperform better and better.”