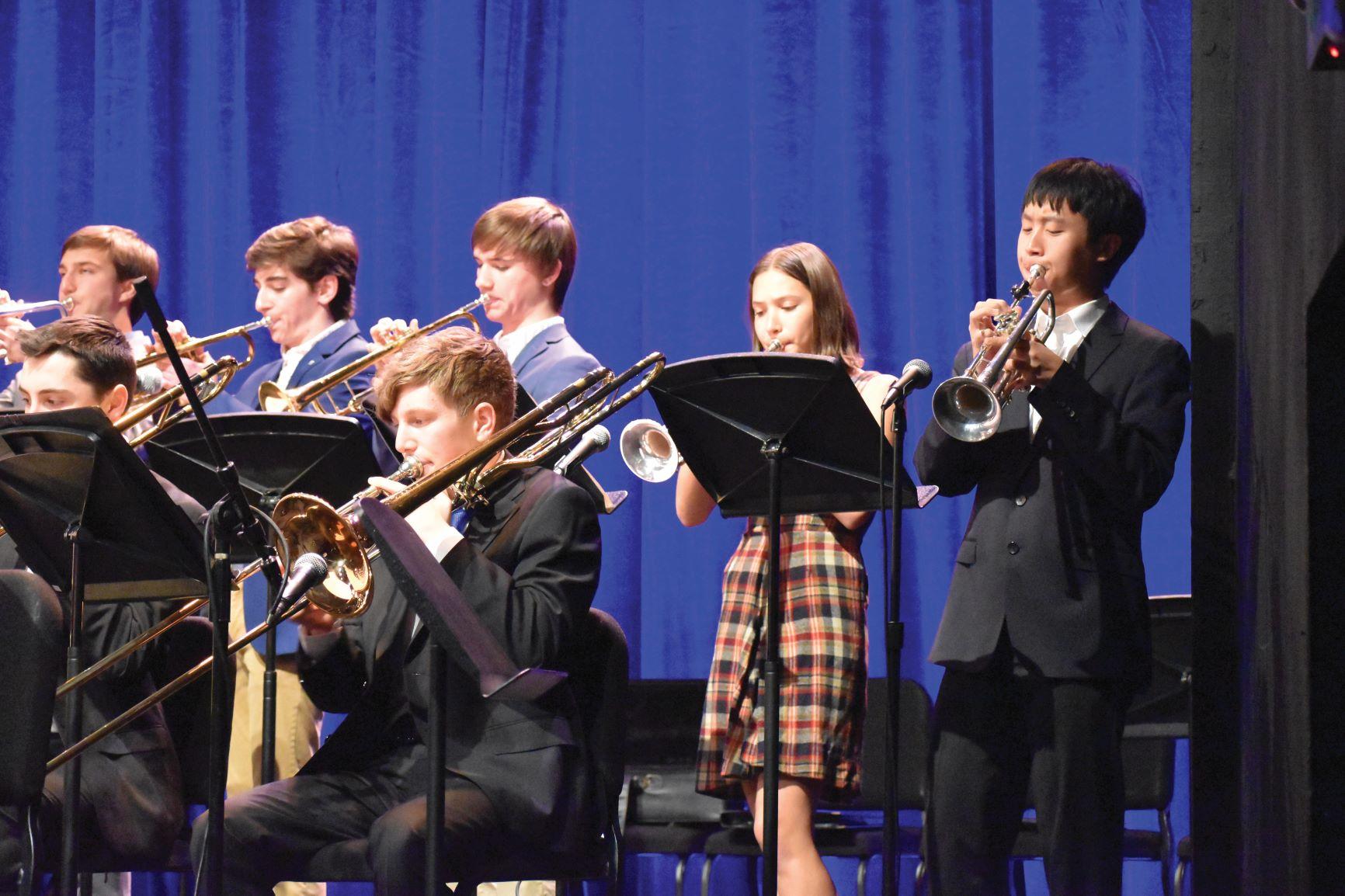 Jazz band members play their instruments as they perform in a collaborative piece.

In memory of former Associate Head of School Liz Resnick, the ensemble played “A Rainbow Connection.”

Isabel von Mende ’20, who attended the concert, said she enjoyed watching the various improvisational performances at the concert.

“I enjoyed listening to the music and seeing a bunch of my friends perform,” von Mende said. “I was surprised by how many people performed. I was really impressed by their performances.”

Saxophone player Cecilia Mesa ’22 said despite her nerves, she enjoyed getting the chance to play with friends during the concert while expressing herself through the music.

“This was my first time playing [the soprano sax] for an audience,” Mesa said. “The saxophone is such a versatile instrument that can play a wide range of musical styles and still sound really good. I’ve always loved the sound of it, so it was a no-brainer when I decided to learn [how to play].”Mesa said she feels that she achieved her goal of controlling her pitch during the more difficult sections of music.

“I’d say the concert went pretty well,” Mesa said. “Every band played really cleanly and every song sounded so amazing. Overall, it was a really fun experience and I’m glad I got to share it with such awesome people.”

Saxophone player Brandon Liang ’21 said that despite minor mistakes, he feels the concert was a success and enjoyed playing for his friends and family.

“Jazz is one of those things where it’s totally fun to mess up because it adds to the spontaneity of the music, so I find it a lot less stressful than classical concerts, but I still always go out there aiming to play well,” Liang said.

Liang said that he liked the improvisation in the group’s last piece.“My favorite part was the end of our last song, The Cannonball Run, when [Erik Anderson ’20], [Otis Gordon ’20], [Anjee Feng ’20] and I were improvising together because it was full of energy, and I could tell we were having fun.”

“It’s a really exciting, upbeat song and I think the audience really enjoyed it,” Ahmad said.

Ahmad said he was especially happy with their performance considering the obstacles the band faced together.

“I thought the concert went really well, especially compared to our expectations of it,” Ahmad said. “The band lost a lot of talented members in the graduating class, so there were concerts we couldn’t step up and find so many new members. Despite that, we rose to the occasion.”

Saxophone player Coco Kaleel ’20 said the performance was a celebration of their hard work.

“You practice for the entire semester with your band, and then it’s the moment of truth, like the big game in a sports season,” Kaleel said. “You’re scared to mess up, and you have to trust your band. It’s satisfying when it all turns out well.”

Kaleel said she is excited for the band’s future tour.

“We’re going to Poland and the Czech Republic,” Kaleel said. “The extra practice means we’ll be really together for our end of year performance.”