Girls end with wins in league 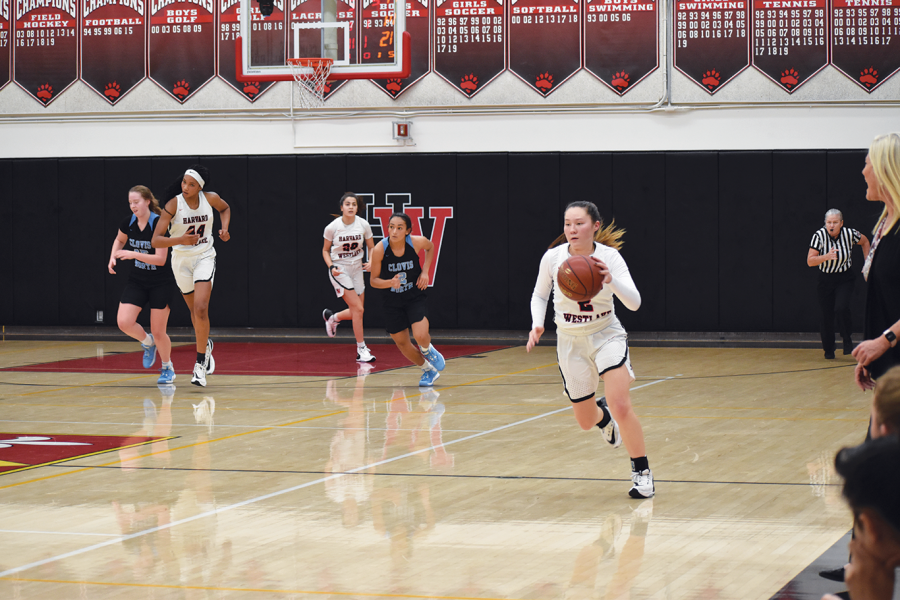 (Ko)ld Blooded: Guard Kimiko Katzaroff ’21 pushes the ball up on a fastbreak in a 50-35 win against Clovis North High School at home Dec. 7 to win the Brentwood Invitational Championship. Credit: Kyle Reims/Chronicle

After winning the Brentwood Invitational and the Desert Heat Classic early in the season, the girls’ basketball team currently holds a 15-8 record as it prepares for CIF Division I Playoffs.

After defeating Clovis North High School 50-35 Dec. 7 in the championship game of the Brentwood Invitational, the girls travelled to Texas on Dec. 26 to compete in the Sandra Meadows Classic. In its first two games, the team defeated Palo Duro High School 62-60 and Bishop Lynch High School 54-50 with forward Kiki Iriafen ’21, who made the All-Tournament Team, finishing with 23 points against the former. The squad lost to Plano High School 45-43 and Conway High School 69-68, however, it finished with a 2-2 overall record in the tournament.

This season, Iriafen leads the way for the Wolverines, averaging 23.6 points per game and 15.6 rebounds per game, according to MaxPreps. Iriafen is ranked as a top 10 player in the class of 2021, according to Collegiate Girls’ Basketball Report.

With an 8-6 overall record after the Brentwood Invitational, the squad competed in the Desert Heat Classic in Palm Springs beginning Jan. 2. In the quarterfinals, the girls defeated Murrieta Mesa High School 63-43 and then defeated Ventura High School 54-24 Jan. 3 in the semifinal game. The squad finished the tournament with a 69-35 win in the championship against Culver City High School on Jan. 4. Guard Mirabella Wong ’20 attributed the Wolverines’ success to the team’s dynamic that was established in both the Desert Heat Classic and the Brentwood Invitational.

“Team bonding has played a huge part in winning tournaments because we are able to push each other and trust each other in order to be successful,” Wong said.

In its Mission League opener, the team defeated Notre Dame Academy Girls High School 65-15 on the road Jan. 7. The squad then faced non-league opponent Mater Dei High School, which was ranked as the second best team in California at the time, according to MaxPreps.

After coming from behind to tie the game in the third quarter, the Wolverines were unable to maintain their momentum, losing the game 59-55. After losing to Mater Dei, the team played four league games, finishing with a 3-1 record during this stretch. In a home game against Chaminade College Preparatory High School, the team defeated the Eagles 63-62 with a game-winning free throw from guard Melissa Zozulenko ’21. Guard Kimiko Katzaroff ’21 outlined the squad’s objectives as it heads into the season’s home stretch.

“Our biggest goal is definitely to win Mission League,” Katzaroff said. “After that we hope to make it as far as we can in CIF Division I Playoffs.”The girls will play their next game against Bishop Alemany High School on Jan. 30.